Members of Americans for Prosperity, American Majority and John Birch Society have their hands in the campaign. 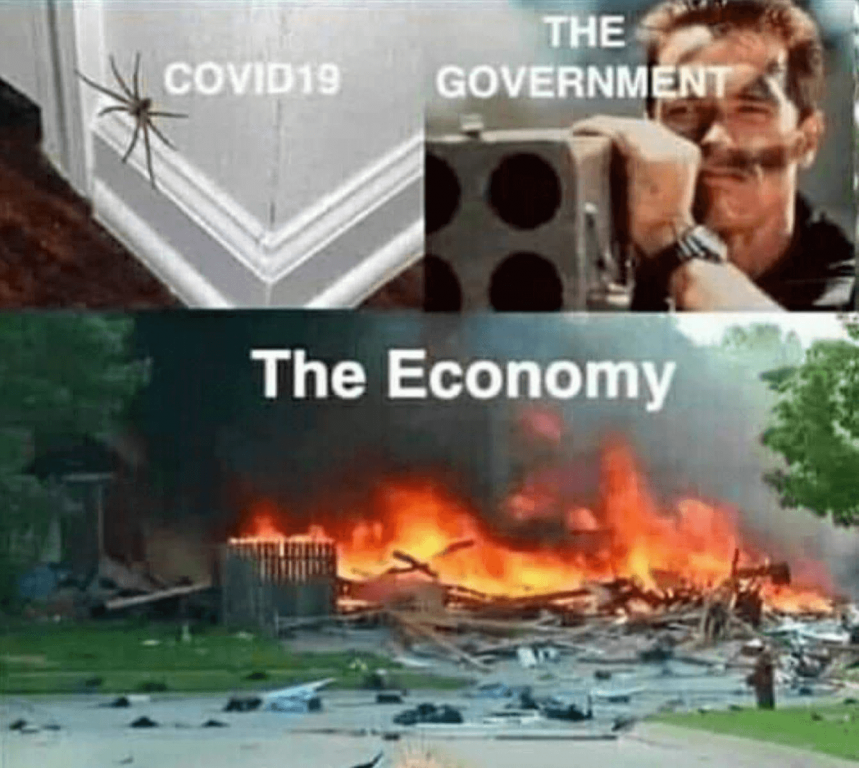 The Reopen Wisconsin group page is filled with memes against government responses to COVID-19.

As connections to large right-wing organizations are uncovered in the growing movement to reopen the economies of states around the country, organizers of the rally planned in Wisconsin continue to say they’ve turned down any outside influence.

One of the organizers, Madison Elmer, posted in the private Facebook group associated with the rally, set for Friday, saying Wisconsin organizers turned down an offer of support from a larger group.

“Special interest money was offered towards our rally, we politely declined for various reasons but the biggest reason being that it wouldn’t be a true grassroots cause,” Elmer wrote. “Wisconsinites aren’t driven by money. We are driven by personal truth, the feeling of accomplishment from hard work and seeing people band together for Freedom. Money always has chains attached and we want to be Free People.”

But, despite Elmer’s stance on outside influence, the membership of the Facebook group suggests those outside groups got in anyway.

Joining her is Nate Nelson, the Wisconsin Field Director for American Majority, a nonprofit dedicated to training conservative candidates and operatives. American Majority calls itself “the leading developer of the nation’s new 21st century grassroots infrastructure.”

There’s also Christian Gomez, research project manager at the John Birch Society. Based in Appleton, the society was founded in 1958, picking up the labels far-right, right-wing and conspiracist organization along the way.

“Our local grassroots activism is like no other,” states the John Birch Society’s website. “Standing at the forefront of the battle to restore Constitutional freedoms, we can secure a future with less government and more responsibility.”

“If you cherish your hard-earned freedom, now is the time for your voice to be heard. Whether it’s educating yourself on our action projects, contacting your elected officials, or leading a group of activists, we have the experience and determination to bring you the best possible resources to accomplish it all.”

Wisconsinites Against Excessive Quarantine, a Facebook group organized separately from the one officially associated with the rally, has gained more than 100,000 members and was started by Ben Dorr.

Dorr is a gun-rights activist, who along with his brothers, argues the NRA is too compromising on gun safety.

The Dorr brothers have started similar groups in states across the country.

Last week, Steven Moore, an ally of President Trump, said in a live streamed Youtube video that he was working with a group in Wisconsin to “shut down the Capitol.” He added he had spoken with a large donor willing to pay the legal fees for anyone who gets arrested.

The Convention of States, an interest group tied to the Trump administration has moved in recent weeks to stoke the protests of so-called government tyranny expressed in stay-at-home orders by governors during the COVID-19 pandemic.

The organization, which also has ties to the Koch family, has bought ads on social media in several states — including Wisconsin — calling for the end of “extreme overreach” by governors. The ads, which are still active, have reached millions of Americans.

“COS isn’t involved with planning or organizing the rally in Wisconsin or any of the numerous other rallies around the country,” spokeswoman Carol Aldridge said in a statement. “These are spontaneous, citizen-led initiatives in response to unprecedented government regulation. Our staff and volunteers are civically-minded citizens who volunteer extensively outside of their work for COS.  Many will doubtless be at the rally, but as concerned citizens, not as representatives of COS.”

It’s unclear how much influence is held by all of these people representing larger special interest organizations. There are, however, some members with a great deal of influence over the group — the moderators.

Listed as a moderator, and scheduled to speak at the rally, is Jay Schroeder. Schroeder ran for Wisconsin Secretary of State in 2018 and lost in the general election.

Along with Schroeder on the moderator list is Matt Ahmann, a student at Indiana University connected to Turning Point USA — a nationwide conservative student group founded by right-wing provocateur Charlie Kirk.

Shortly before President Donald Trump tweeted that three states with Democratic governors should be “liberated,” Trump had retweeted a number of Kirk’s posts.

Ahmann’s Facebook lists him as the campus coordinator for Turning Point. It also shows a number of photographs of him with Walker and says he’s the executive director of Anticom PAC. Anticom is a real political action committee, filed with the Federal Elections Commission as Citizens Against Communism, and Ahmann is listed as a contact — though the group has only reported $100 in donations.

Among the members of the Reopen Wisconsin group are state political leaders.

Rep. John Spiros (R-Marshfield) is in the group and has shown activity, liking and reacting to a number of posts. A legislative staff member of Rep. Treig Pronschinske (R-Mondovi) is also an active member.

Adam Bieber, the Shawano County Sheriff, is in the group. He’s been vocal about his refusal to enforce Gov. Tony Evers’ Safer at Home order.

Outside of the group’s politically connected members, there are thousands of other Wisconsinites in the group. They hold all sorts of jobs, essential and otherwise, some agree with the cause, others are just curious or interested in the conversation.

Some work in senior homes and assisted living centers — where they will likely come into contact with people vulnerable to complications from COVID-19 infection after the rally.

Shawn Bohman, a maintenance worker for two low-income senior homes run by the Housing Authority of the City of Milwaukee, said he believed the Safer at Home order was “getting out of hand,” and he was happy to join the rally.

“Hell yeah, I’ll be there,” Bohman said about the Madison rally, adding he went to the rally in Brookfield last weekend as well.

When asked about the risk of contracting COVID-19 and bringing the virus into his workplace, potentially infecting the vulnerable citizens of Holton Terrace or Merrill Park senior homes, he said he wears protection at work before hanging up the phone.

“The Housing Authority of the City of Milwaukee (HACM) recognizes that our employees have the opportunity to exercise their First Amendment right during non-work hours,” spokesperson Amy Hall said in a statement. “The safety and well-being of HACM’s residents, staff, and partners are a top priority for the Housing Authority. Our staff have been instructed to follow the health and safety guidelines set forth by the federal, state, and local health agencies.”

There are also state employees involved, including four who work in the Department of Corrections — some as correctional officers in the state’s prisons. The prison system has already received scrutiny for outbreaks with a number of inmates and employees testing positive for the virus as the realities of prison make it difficult for incarcerated people to social distance or isolate themselves from others.

“If DOC becomes aware of an employee violating work rules, we will investigate and act appropriately,” spokesperson Anna Neal said in an email.

Elsewhere in state government, the Department of Children and Families and Department of Transportation are represented, as is the Milwaukee County District Attorney’s Office.

There are police officers and firefighters, paramedics, nurses and doctors in the Facebook group as well.

Some of the first responders and healthcare workers may only be curious, others, such as doctors Tim and Nikki Allen, believe the Safer at Home orders were excessive and ineffective.

The couple own a private family practice clinic in Cudahy and Tim plans to speak at Friday’s rally. He says he’s concerned the conversation around the Safer at Home orders hasn’t involved the “transferred death,” that may be caused because of mental health issues, poverty or people avoiding emergency rooms.

The Allens, who say they’ve worked with local health authorities with the COVID-19 response and tested patients for the virus at their clinic, say they believe they should be allowed to question “the experts” at the Centers for Disease Control and Prevention or World Health Organization.

Tim said that because any disagreement with the consensus has been “censored” he’s been pushed to speak at the rally — even though it includes political elements and beliefs he doesn’t believe in.

“The people who are dying because of the epidemic are every bit as important as the people dying from the epidemic,” he says. “I care about people dying of COVID, absolutely. I’m not going to this rally to say ‘I’m mad at the governor, I’m mad at the president, I think the people at CDC or World Health Organization are not trying to do things right.’ I’m concerned we’re not talking about both sides of the cost.”

The Allens, while saying they’re not naive, added they believe they’ll be able to get their message of moderation across at the rally, even though it has been swept up into much larger political forces. Nikki says she thinks the organizers have been successful in tamping down the white supremacism, pro-Trump activism and racism present at other rallies across the country.

“This isn’t about your stupid Confederate flag,” she says. “I’ve seen a lot of intentionality in their approach and in their desire not to let this particular event be taken over by a special interest group or become a platform for bashing one party or another.”

Even though the Wisconsin rally’s organizers expect thousands of protesters to show up Friday, polls continue to show stay-at-home orders are overwhelmingly considered appropriate. A Marquette Law Poll released April 1 showed 86% of respondents agreed with the governor’s action to keep people at home.

One thought on “Right-Wing Groups Linked to #ReopenWisconsin Campaign”