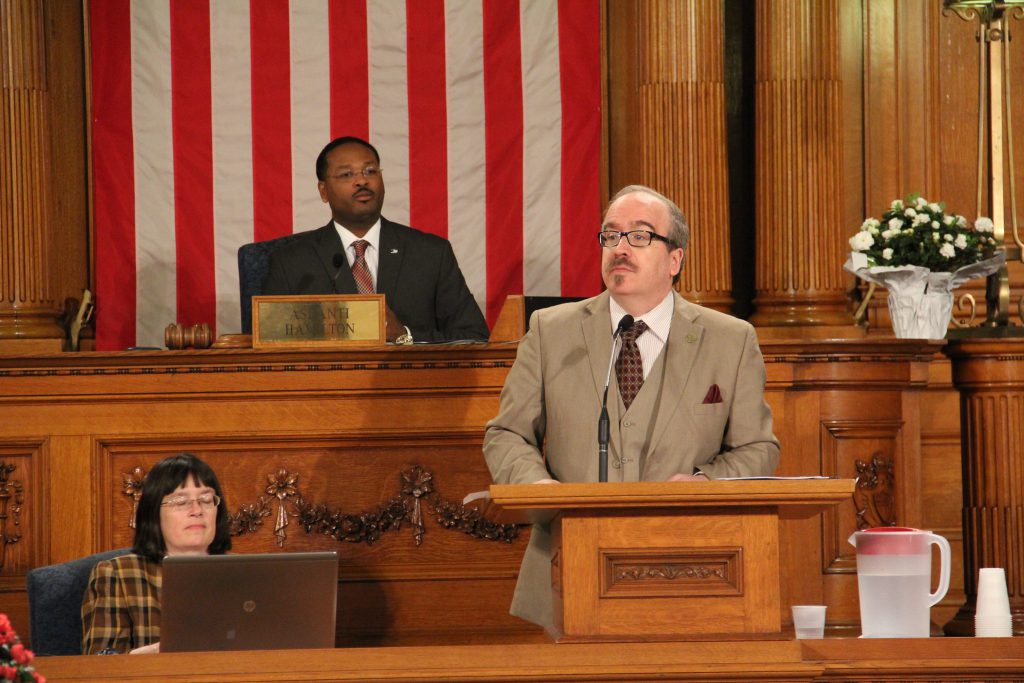 Jim Owczarski speaks to the Common Council after being sworn-in in April 2016. Photo from the City of Milwaukee – Public Information Division.

The re-election of the Milwaukee City Clerk is normally a perfunctory affair.

Typically, the individual previously held the job is nominated and the Common Council votes unanimously to confirm them. That’s how it’s gone every four years since 2004, with Deputy City Clerk Jim Owczarski replacing the retiring Ronald D. Leonhardt in 2012.

The apolitical position leads an office of approximately 110 employees that ultimately are controlled by the 15 members of the Common Council.

The vote comes after the council members are sworn in and elect their own president during the charter meeting that kicks off every four-year term. But the council broke custom and publicly sparred over who should serve as President and that divisiveness continued as they moved on to electing the city clerk.

Alderman Mark Borkowski nominated Owczarski to serve a third term and gave a speech praising his accessibility, knowledge and commitment to treating everyone fairly.

But then Alderwoman Nikiya Dodd nominated a second candidate, former Milwaukee County Board of Supervisors Chair Theodore Lipscomb, Sr. “I disagree with the statement of treating everyone fairly,” said Dodd about Owczarski. “I think we can do better.”

Lipscomb, as of yesterday, was no longer a member of the county board having given up his seat in an unsuccessful run for the post of county executive. Dodd had served with Lipscomb from 2010 through 2012. “Just a professional person that can move the city clerk’s office to better management,” said Dodd. Lipscomb, a resident of suburban Glendale, has a degree in architecture from UW-Milwaukee and has worked in real estate development. He attended Dodd’s swearing-in ceremony in 2018 when she was first elected.

“Not every member of this body is satisfied with the current City Clerk,” she said.

Dodd said the council did not have to vote on the matter today, which caused differing viewpoints and questions to emerge. Members would typically turn to Owczarski in such a moment, but the clerk didn’t offer any on-the-record guidance to newly-elected Council President Cavalier Johnson or other council members.

Dodd moved to hold the measure and found support from council members Milele A. Coggs, Khalif Rainey and Chantia Lewis. But the motion failed 11-4.

The council then moved to vote on their choice for City Clerk, and deputy city clerk Jessica Celella called the roll. Owczarski prevailed over Lipscomb 13 to 1, with Dodd voting for Lipscomb and Coggs abstaining without explanation.

Owczarski will again lead the office for another four years. His charter responsibilities including attending all council meetings, keeping a full record of its proceedings and administrating oaths of office to elected officials and other city appointees. He’s also the head of the city’s television station City Channel, the License’s Division, Municipal Research Center, Historic Preservation Commission staff, Inspector General and Legislative Reference Bureau. Liquor licenses, modifications to historic properties and legislative authoring requests all pass across his desk, as does the occasional esoteric request from a reporter.

According to the city budget, the position is paid $98,392 per year.