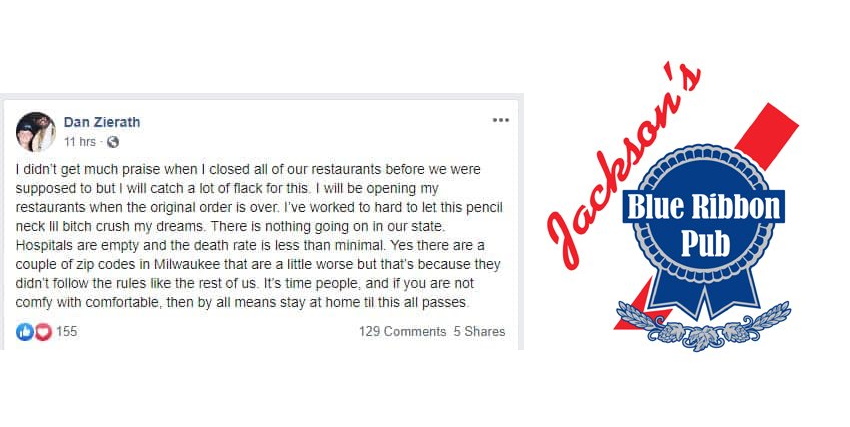 Zierath, a Brookfield resident, was one of the hundreds of people that protested Governor Tony Evers order outside Brookfield Square Mall on Saturday. “I’ve worked hard to [sic] let this pencil neck lil [sic] bitch crush my dreams,” wrote Zierath on Facebook.

“Hospitals are empty and the death rate is less than minimal. Yes there are a couple of ZIP codes in Milwaukee that are a little worse but that’s because they didn’t follow the rules like the rest of us,” wrote Zierath shortly after violating the state’s order on public gatherings.

He told the Milwaukee Journal Sentinel’s Carol Deptolla that he’s planning to reopen Jackson’s first and then in the next week open three other establishments: Zisters in Elm Grove and the Thirsty Duck in Wauwatosa and Sussex. Zisters is already open for carryout, as the order allows. The locations would operate at 50 percent capacity and follow social distancing protocols.

His family has a different plan.

“Just to clear the air, Zisters will absolutely NOT be opening to the public before the governor allows us. Thank you for your continued support through all of this,” wrote Zierath’s daughters Betsi and Gabbi on Facebook.

Mark Zierath, Dan’s brother, is the majority owner of Jackson’s Blue Ribbon Pub: Downtown and took to Facebook to declare that his location will not be opening. “To clarify we are under different ownership from the Jackson’s in Tosa. We do not share in any of his views or opinions. We will most definitely NOT be opening until the stay at home order has been lifted. Thank you for your continued support,” wrote the restaurant owner.

His family members aren’t the only ones who disagree with the plan. His legal counsel does, too. “Asked if he had consulted an attorney in the matter, he said he had and was advised against opening the restaurant,” reported Deptolla.

Dan Zierath might be able to pay his employees even if he doesn’t open for the next two months. He told Deptolla he applied for and received approval for a federal Paycheck Protection Program forgivable loan. The $350 billion program, which ran out of money last week, provides businesses with funding to continue paying their employees. But in Facebook comments to his now hidden post, Zierath said he would replace employees that did not want to work and would not be providing personal protective equipment.

He is scheduled to appear as the defendant in a jury trial on June 9th in Waukesha County for a domestic abuse case involving felony criminal damage to property and misdemeanor charges of battery, disorderly conduct and criminal damage to property. He has pled not guilty to the charges. A complaint was first filed in the case on August 29th, 2019. He was also found guilty of possession of marijuana after being arrested by Wisconsin State Fair Park Police Department in August 2019 and pled guilty to disorderly conduct in 2009.

Zierath did not respond to a request for comment.