Absentee Ballots Must Be Mailed Back By April 7th

All absentee ballots must be postmarked and mailed Tuesday. US Supreme Court rules on Wisconsin election. 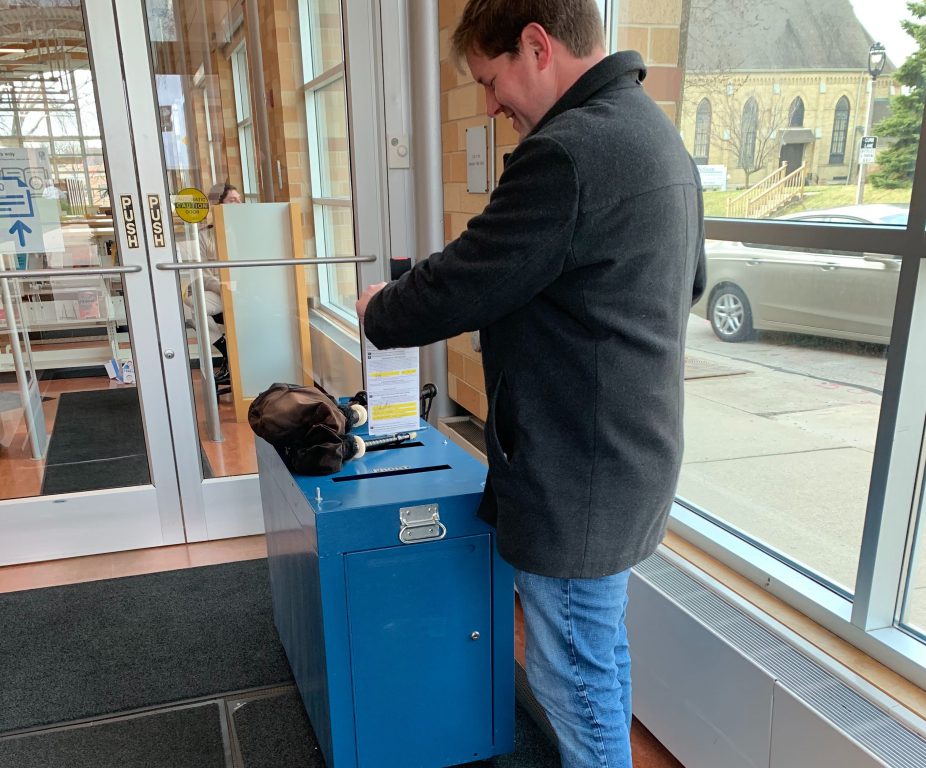 Jeramey Jannene deposits his absentee ballot in a City of Milwaukee dropbox. Photo by Alison Peterson.

Just over an hour after the Wisconsin Supreme Court ruled to reinstate in-person voting for the April 7th Spring Election, the United States Supreme Court weighed in and partially altered the rules for absentee ballots in the election.

On a 5-4 vote, the court altered an earlier decision by federal judge William Conley that extended the time voters had to return their absentee ballots.

The ruling effectively requires all voters who have not received their absentee ballot in the mail, many of who requested one over two weeks ago, to go to the polls. Election officials across the state have not been able to definitively explain where the ballots are going. “For reasons we cannot identify there are people in the public that have not received their absentee ballot,” said Milwaukee Election Commission Executive Director Neil Albrecht in a press briefing Monday afternoon. At the time of the briefing he was encouraging voters with missing ballots to call the commission (414-286-3491) for a new one to be issued, but he said those voters will need to vote in person.

The ruling said that the Democratic Party, the plaintiff in the suit, did not put forward probative evidence on the matter of ballots not being received on time.

Milwaukee voters that have a ballot can hand-deliver it to the city tomorrow. The City of Milwaukee will operate its five drop sites for ballots from 8:00 a.m. until 8:00 p.m., including with individuals that can provide the necessary witness signature, on election day. The five drop sites are different from the five polling places the city will operate. All 10 sites can accept ballots.

Voters concerned about their ballot being counted can have an employee at a post office stamp the ballot to ensure that it is eligible be counted as opposed to dropping it in a mailbox and hoping it is processed before the end of the day.

The federal ruling, made on ideological lines with all four of the liberal judges dissenting, effectively restores a pre-2016 law in Wisconsin that allowed ballots to be received after election day if they are post marked by that day. Prior to Conley’s ruling last week the ballots had to be received by the close of the polls at 8:00 p.m. on election day.

But the volume of the absentee ballots is more likely to change election results than in past elections. A federal appeals court had made a ruling that election results could not be released until the 13th to prevent political parties and candidates from attempting to influence the election when ballots were being counted and unreturned ballots could still be mailed in. “It is highly questionable, moreover, that this attempt to suppress disclosure of the election results for six days after election day would work,” wrote the Supreme Court justices in their ruling.

The Wisconsin Elections Commission will issue a final ruling on when results can be released.

More than 1.2 million ballots were requested in Wisconsin according to the commission, but only 43 percent had been recorded as returned by close of business on April 5th.

The court’s full ruling can be read on Urban Milwaukee.