What will the city do for property owners that want to voluntarily replace their laterals? 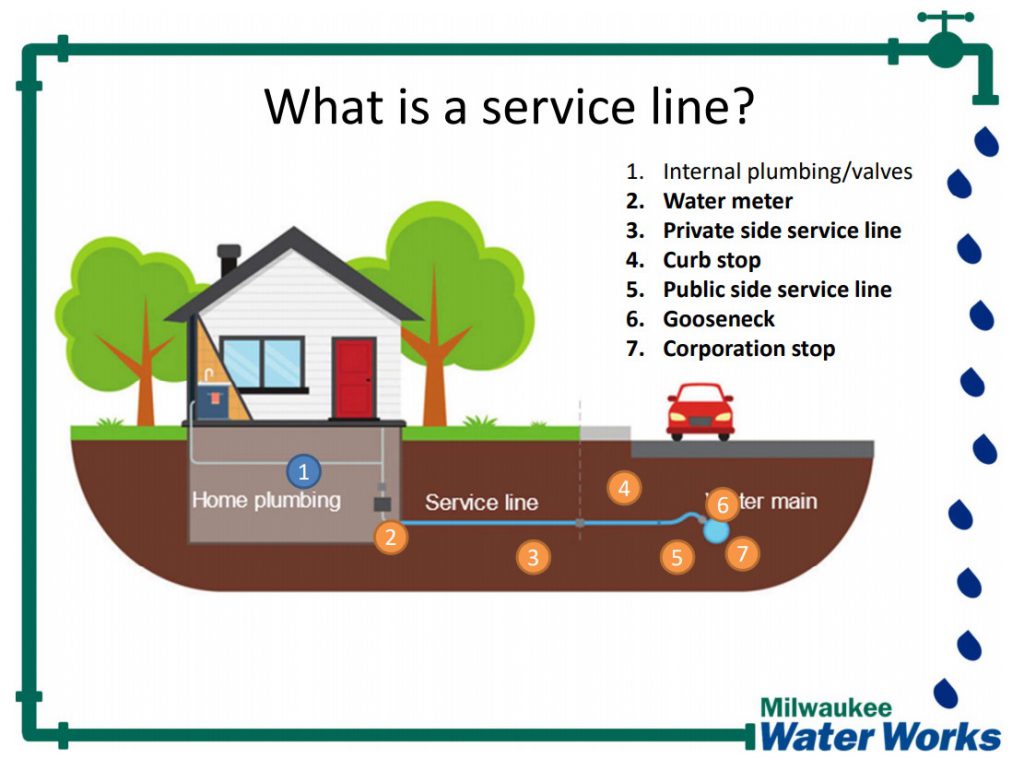 Lead lateral diagram from the Milwaukee Water Works. Image from the City of Milwaukee.

Even as more funding is allocated, the city remains decades away from replacing all of the publicly and privately-owned lead service lines.

A report Wednesday from the Milwaukee Water Works (MWW) highlighted the challenges and opportunities with replacing the approximately 73,000 known lead service lines that connect buildings to water mains.

A total of 998 lead laterals (service lines) were replaced in 2019 said MWW Superintendent Karen Dettmer. Of those replaced, 670 were replaced as a result of a leak or failure, 128 were at child care facilities or schools, 176 were done as part of replacing water mains, 23 were done voluntarily by property owners and one came from “other utility work.”

“In 2020, we have $13.4 million budgeted with the goal of 1,100 lead service lines to be replaced,” said Dettmer in delivering her semi-annual report to the Common Council’s Public Works Committee. That’s an increase of $1 million over 2019.

Based on three years of data, it will be approximately 70-years before the city-owned utility replaces all of the laterals. The average cost to replace a service line since January 1st, 2017 is $10,783 according to a MWW report, matching a 2018 estimate from the Department of Public Works that wholesale replacement would cost approximately $750 million.

The city-owned utility, which sells water to 16 municipalities, is limited on where it can derive funding from to replace laterals based on state utility regulation. It cannot use funds from customers to replace laterals at its own discretion. “We are really confined by the financial constraints,” said Dettmer. Further complicating the matter, because the service line is partially privately owned, the city cannot force replacement in many cases. By 2016 ordinance, the city requires replacement in the event of a break or water main replacement and caps the cost to the homeowner at $1,754 (adjusted annually for inflation) paid over 10 years.

“One extremely exciting opportunity to note is that the state Department of Natural Resources is bringing that Clean Drinking Water loan program,” said Dettmer. The forgivable loan program was used to fund the replacement of laterals at child care facilities.

Dettmer said MWW is also looking at updating its notifications to residents and property owners when a replacement is required as part of replacing a water main. Property owners that don’t respond fast enough cause contractors to have to return to the job site at an additional cost, driving up the per lateral replacement cost. Eleven percent of property owners required to replace their lateral in 2019 were unresponsive entirely, lost their eligibility for the city subsidy and were referred to the Department of Neighborhood Services.

“I appreciate you looking at other contingencies, but 73 years is really not an acceptable answer,” said Alderman Michael Murphy of the replacement cycle. Approximately 45 percent of MWW-connected properties in Milwaukee have lead laterals.

A new program could induce more property owners to voluntarily replace their laterals. Requested by Alderwoman Milele A. Coggs via a footnote in the 2020 city budget, the Milwaukee Water Works and Department of Administration is required to provide recommendations on establishing a program to facilitate voluntary replacements for property owners that don’t comply with existing programs.

“We will be reporting out before May 31st this year on opportunities we see,” said Dettmer.

Unlike with lead paint abatement, the federal government provides no direct assistance to replace lead laterals. The city received a $5.6 million lead paint abatement grant in October 2019. The city’s Lead-Safe Milwaukee explicitly states that lead paint is the most common source of lead poisoning for children.

MWW water quality manager Lucas Beversdorf detailed to the committee how the utility provides testing kits before and after a replacement to measure lead in water. The three container kits are intended to measure lead from in-home plumbing, the lateral and the city water supply. Only 26 property owners participated in 2019, but Beversdorf said the results show a positive impact from replacing the lateral. A challenge remains from in-home plumbing that can often contain lead solder.

The utility and Milwaukee Health Department also provides water filters to high risk populations where testing finds lead in water in excess of five parts per billion, including schools and child care facilities. “There are no schools currently with lead service lines,” said Dettmer. MWW monitors the list of child care facilities. The council approved funding the replacement of all lead laterals at child cares facilities in 2017 at no cost to the property owner, but has struggled to get a response from dozens of operators.

Murphy also asked about a paradoxical issue. The 14th Aldermanic District, which includes Bay View and other south side neighborhoods, has the highest rate of lead laterals, but one of the lowest rates of lead poisoning. “I don’t understand why no one really looks into that issue,” said Murphy.

“I would suggest that the Health Department could speak much more eloquently on causation, correlation,” said Dettmer. “The relationship appears to be poverty based.”

Should La Crosse Remove Its Hiawatha Statue? by Hope Kirwan and Megan Hart