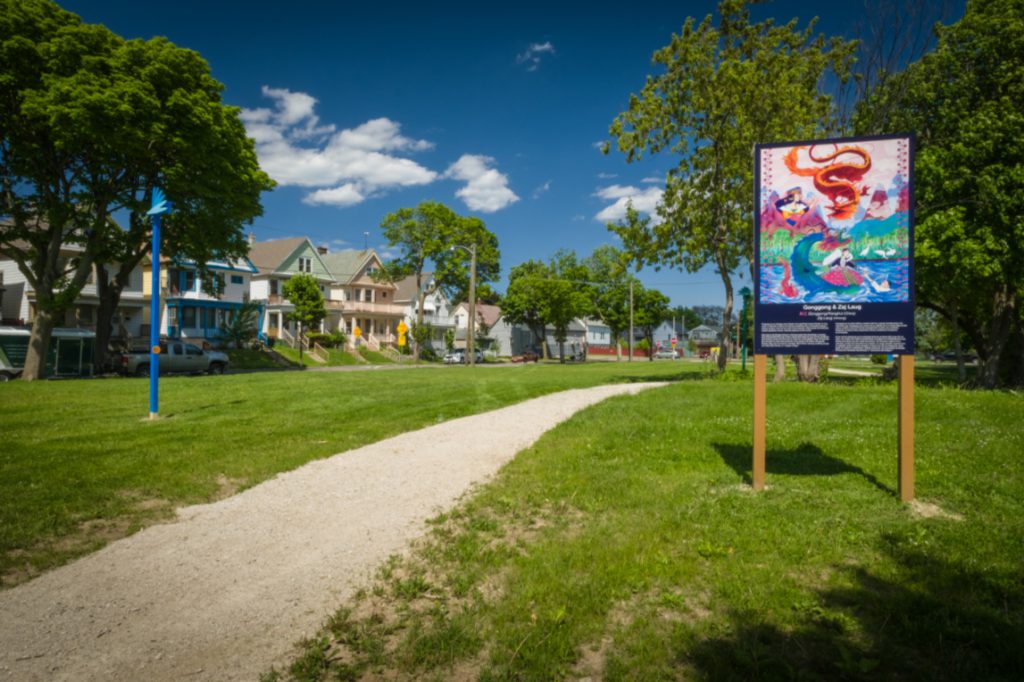 The revitalization of the Kinnickinnic River watershed and the surrounding neighborhoods on Milwaukee’s near-south side comes down to one simple idea: “Agua es vida,” or “Water is life.”

As Milwaukee developed and urbanized in the 20th century, more impervious surfaces, such as rooftops and bridges, were built. An impervious surface does not allow rainfall to seep into the ground, making flooding more likely and not allowing plants and wildlife to be nourished. To combat the increased flooding at that time, the Kinnickinnic River watershed was developed with concrete — but this impervious surface posed the same risks, along with new ones.

“The river comes up so quickly and it goes down so quickly, and within this section, it can move water up to 20 feet per second, which is faster than whitewater rapids,” Patrick Elliott, Senior Project Manager of the Milwaukee Metropolitan Sewerage District (MMSD), said in a segment of Great Lakes Now. “So just imagine having whitewater rapids running through a dense urban neighborhood right in people’s backyards.”

With a $350 million plan, the Kinnickinnic River Flood Management Project, MMSD has been working to reduce the levels of flooding in the area in Milwaukee’s near south side among the neighborhoods of Polonia, Lincoln Village and Forest Home Hills. MMSD’s efforts began in 2018 and include expanding the width of the river and removing the seven-mile stretch of concrete along the banks.

The Department of Environmental Health (DEH) at Sixteenth Street Community Health Center (SSCHC) is working with various partners to complement the efforts of MMSD with a plan called the Kinnickinnic River Corridor Neighborhood Plan, which is providing a transitional space that residents can still inhabit and enjoy before MMSD’s project is completed.

Kelly Moore Brands, Environmental Projects Coordinator at SSCHC, said there is a vital connection between what SSCHC does and what the plan aims to do, which is create a safer, healthier, more enjoyable living environment for residents and to empower them to take ownership of their neighborhood.

“We definitely see how people’s environment affects their health,” Moore Brands said. “Because our patients live, work, learn and play in this area in this watershed and the near South Side, this was a great opportunity we saw to make an improvement.”

SSCHC took the opportunity to team up with community organizations to transform the space using the residents’ own input. Moore Brands, along with Neighborhood Revitalization Coordinator for SSCHC Stephanie Mercado, said their starting point was to knock on residents’ doors.

“Lots of feedback came from going door-to-door and asking folks what they are observing in their neighborhood, what issues are they facing,” Mercado said. “Based on those conversations and that desire to do something, we were like, ‘OK, how do we make this happen?’”

Mercado said through conversations with residents, they found the main wishes of residents included the removal of alleyways, a walking trail, a place for their kids to play and more public art.

UW-Milwaukee architecture students collaborated to design renderings of the space based on the residents’ feedback. The DEH and the KK River Neighbors in Action (KKRNIA), a group of residents working to create change in their community, were then able to secure a grant from Rails-to-Trails to execute the visions.

A trail along the river was one of the most requested amenities of the residents, and Moore Brands and Mercado said that although there will be changes made in the coming years that will not allow for a permanent trail just yet, a temporary trail can still help build community morale and hope. SSCHC was able to convince MMSD to put in the trail.

“We wanted to have this meandering gravel trail as a way to sort of show people that in the future, there will be a trail here,” Moore Brands said. “We put Kinnickinnic River Trail signs so that people could get excited about the future.”

In addition to the trail, children’s playground equipment, community garden beds and artwork were installed. The artistic pieces include raised metal panels by local artist Gabriela Riveros depicting water deities from the different cultures represented in the neighborhood, and sculptural bird, butterfly and bat houses by Wisconsin artist Mollie Oblinger that mimic native plants. The installations came as a result of artist and scientist walks that the Haggerty Museum of Art hosted, which were designed to give interested residents different perspectives about their environment.

To remind themselves why this project is so important, residents also wanted the phrase “Agua es Vida – Water is Life” painted on a section of the concrete along the river to see when they cross the pedestrian bridge.

Moore Brands said that even though the painting will be removed once that section of concrete is removed, they hope to preserve it somehow in the final rendering of the space.

Moore Brands and Mercado emphasized that these efforts would not be possible without their partners. DEH staff along with youth from the Milwaukee Christian Center, KKRNIA and other residents are continually involved in the upkeep of the installed amenities.

“This is a great project because everyone has come together, all different entities, and just really trying to make a change and do something positive for the neighborhood,” Travis Hope, a resident of Milwaukee’s south side and the President of KKRNIA, said in the Great Lakes Now segment. “I think this project’s been very positive for the community and gives people something to look forward to.”

The project is a finalist for the MANDI Brewers Community Foundation Public Space Award.