Two Opposite Visions of Criminal Justice

By Isiah Holmes, Wisconsin Examiner - Feb 28th, 2020 11:19 am
Get a daily rundown of the top stories on Urban Milwaukee 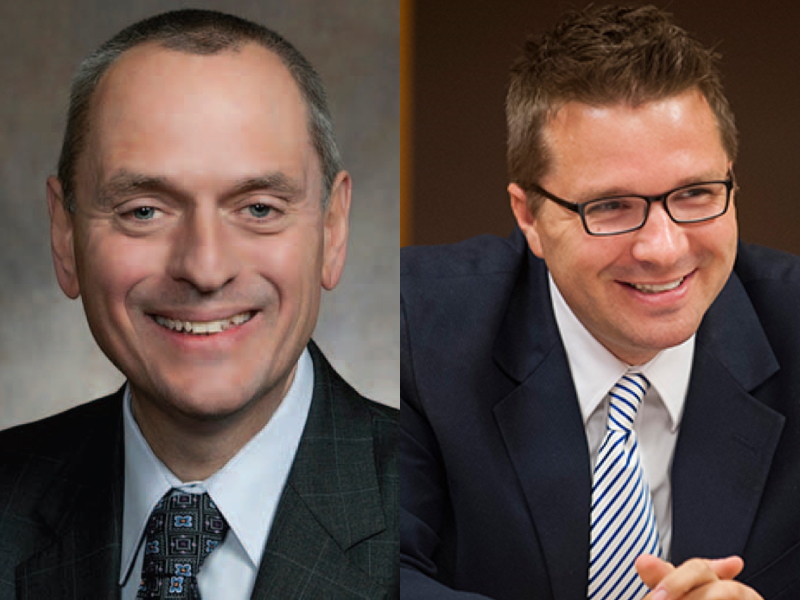 The ideological divide on criminal justice in Wisconsin is personified by two state representatives — Rep. Joe Sanfelippo (R- New Berlin) and Rep. Evan Goyke (D-Milwaukee). The two men find themselves on opposite sides of a heated debate. Whereas Sanfelippo has helped lead the recent legislative push on “tougher on crime” bills, Goyke remains adamant about reducing mass incarceration.

“We really disagree on how the criminal justice system should operate,” Goyke told Wisconsin Examiner, adding that he welcomes the debate. On February 13, Wisconsin Eye organized a dialogue between the two representatives to discuss this ideological fork in the road. During the interview, Goyke pointed out efforts taken by neighboring states like Michigan to reduce prison populations and completely change their criminal justice direction. As those states continue to expand their reforms, he noted, “we’re not seeing the sky fall. We’re not seeing crime rates spike.”

Their exchange came a week after the floor session during which ‘tougher on crime’ bills passed the Assembly. Goyke called the bills debated during long mid-February evenings “the last gasp of the tougher on crime era in the state of Wisconsin.”

Weeks earlier, the bill package sponsors were grilled by both Republican and Democratic members of the Assembly’s Criminal Justice and Public Safety Committee. Committee members questioned the costs of the  policies both for taxpayers and in terms of the lives of Wisconsinites. Throughout all this, Sanfelippo maintains that the tougher on crime bills are opening a discussion into how the criminal justice system affects victims, as opposed to people accused of crimes.

“Nobody wants to dispute the fact that we need some alternative programs,” he told Wisconsin Examiner. “We’re all about giving second chances. I just want to bring into the conversation the fact that we can’t make that the sole focus of whatever we do to reform the criminal justice system. We still have to consider the fact that we owe a priority to victims, and to keeping our neighborhoods safe. That has to be part of the conversation.” Sanfelippo argues that his bills are targeted at “the repeat, violent offenders.”

The bills cover a wide swath of the criminal justice system, from increasing the number of crimes which could result in juvenile incarceration to affecting the revocation process for those on probation or parole. Others focus on the risk of witness intimidation, setting mandatory minimums for repeat petty retail theft, adding more details to a person’s entry in Wisconsin’s CCAP database for public viewing, and gathering more data on crimes and arrests across the state. Separate crime-related GOP bills are also floating around in the final days of session, including one by Sanfelippo to increase penalties for driving without insurance.

Meanwhile, Goyke is working on a bill to help people who have been charged with a crime, but not convicted, expunge their records. A co-sponsorship memo quotes Justice Sonia Sotomayor, who laid out the predicament people in this position face.

“Even if you’re innocent, you will now join the 65 million Americans with an arrest record and experience the ‘civil death’ of discrimination by employers, landlords, and whoever else conducts a background check.” Goyke has also supported legislative efforts to reduce the prison population, co-sponsored by Sen. Lena Taylor (D-Milwaukee) and others.

Sanfelippo has objected to efforts to release more people from jail since helping to announce the bills. “In Milwaukee they made this concerted effort to reduce jail population,” he said during his dialogue with Goyke, “which they’ve done. They’ve reduced the jail population by 16%, but over that same period of time violent crime has increased by 47%. And now our constituents in the suburban communities outside Milwaukee are starting to see that.”

The district which Sanfelippo represents encompasses a few of those communities, including New Berlin and West Allis. “In 2018, more people were arrested for crime in New Berlin, who live in Milwaukee, than actually live in New Berlin,” said Sanfelippo. “So we’re concerned because our constituents are seeing all of this come out from the city into the suburbs.”

Goyke rebutted “the idea that the great evil that is Milwaukee has spread into the suburbs,” saying it is “not an appropriate narrative.” He argued that during the same period of time referenced by Sanfelippo, prison sentences were getting longer. “How is that possible?” Goyke asked, “because it doesn’t work.”

Instead, the Milwaukee representative advocated for a neighborhood-by-neighborhood approach to reduce crime in the city. Particularly in sections of the city that do not enjoy as many resources as some surrounding communities.

Sanfelippo conceded during the Wisconsin Eye debate, “that’s certainly part of it.” Nevertheless, he pointed to statistics showing that while crime across the nation has gone down by 14%, Wisconsin’s crime rates have increased by 24%. That’s according to Federal Bureau of Investigation (FBI) data collected between 2008 and 2017.

He referenced the “tougher on crime” pushes of decades past, during the Clinton Administration, or the so-called “broken windows policy” which became embroiled in  controversy in New York. Goyke recoiled at the idea, “no thank you to return to tough-on-crime 1990’s-era policies and broken window theories of policing.”

Comparing the ‘tougher on crime’ debate with how Wisconsin is handling the opioid crisis, Goyke struggled with the obvious disconnect. “Not once did a Republican or a Democrat introduce a bill to increase the penalties on possession of heroin,” he said.

“How is it that we could come together to address that spike in crime in a way that didn’t involve getting tougher on it, and see success, but then not apply those same lessons to crime elsewhere?” Goyke sees the opioid crisis as an important lesson to treat crime as a public health concern. Even so, Sanfelippo pointed out a distinction between people addicted to drugs and people selling drugs.

Still, it remains possible for the two sides to find common ground. “We’re really not that far off,” Sanfelippo told Wisconsin Examiner. “At what point do you say, ‘okay the second chances are over, now we got to get a little tougher.”

Moving forward, Goyke said that he sees an opportunity to work across the aisle to get more accurate data. “Maybe one of the things that can come out of the last several weeks of debate is a more honest and accurate picture of crime in Wisconsin.” He added, “if we start from that base, and we agree on the facts, then I think reform looks like it has a much better chance of passing.”

2 thoughts on “Two Opposite Visions of Criminal Justice”