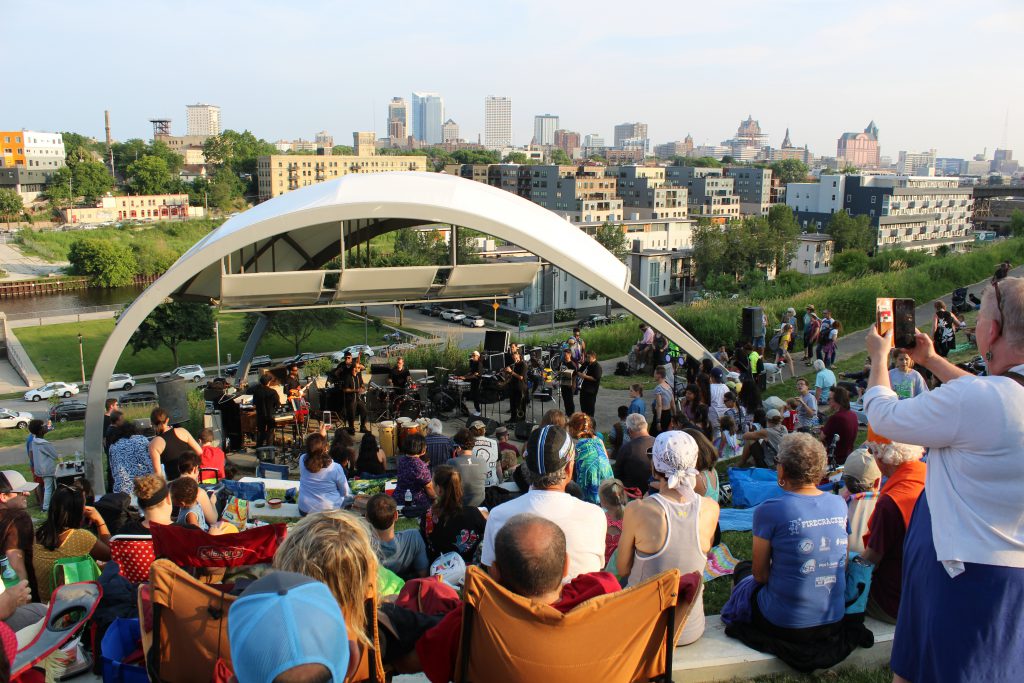 Standing in Kilbourn-Kadish Park and looking out over the Milwaukee skyline, it is hard to imagine that the view did not once exist.

Tom Schneider, Executive Director of COA Youth & Family Centers, had a vision for transforming a crime-ridden, litter-strewn, abandoned expanse of land that was Kilbourn Park — located south of North Avenue near COA’s headquarters — when he stepped into his role in 2001. Before he could create a gathering space for community members, however, he had to convince the city to expand the space and create the iconic skyline view.

“So we went to the city and proposed them doubling the size of the park,” Schneider said. “We got them to bulldoze it back and extend the park … but the city couldn’t afford to upkeep it, so they offered it to the county, and the county offered it to us.”

Once Schneider and COA got ahold of the land and the naming rights, the park became Kilbourn-Kadish Park — but much more than naming it and cleaning it up had to be done.

“We decided the park itself doesn’t just happen — you’ve got to bring people into the park,” Schneider said. “When people are doing things in the park, it also incidentally brings with them safety.”

In order to bring people into the park, garden beds were put in to encourage residents to spend time growing their own fresh food. Summer youth day camps were established, and a soccer field was built. Perhaps most famously, the park became a site for the beloved family concert tradition, Skyline Music Series.

“We had a committee of residents who got together, the park planning committee, and they said, ‘What should we call this series?’” Schneider said. “And somebody said … ‘Skyline music.’ And there was this pause, and everybody in the room said, ‘Yeah, that’s good.’”

What began as a modest gathering of 200 people grew to 400 by the next year, and then 600 the year after that, Schneider said.

“Now we get 8 or 9,000 people coming out,” he said. “The sun goes down, and you get that skyline view and the lights come up in the theater, and then you get the lights in the city … I’m a sucker for that.”

Concertgoers, soccer players and summer camp attendees are not the only ones who benefit from the park’s amenities and community feel. Milwaukee’s Forestry Department trains its foresters in the park, and to celebrate the 100th anniversary of the department, everyone came together to plant 100 new trees in Kilbourn-Kadish.

For Schneider, Kilbourn-Kadish’s impacts expand far beyond the physical perimeter of the park. He said the development of the space has created a spark for transforming the city as a whole.

“It inspires others,” he said. “There are others who have come and looked at our Kilbourn-Kadish Park and are using that as a model for things that they’re doing in other parts of the city.”

Community organizations and residents, in partnership with COA, have already been recognized for their park restoration efforts, as Moody Park won a MANDI Award in 2016.

“It’s an empowering experience when groups of residents get together, and for the rest of their life they know: ‘I made that park happen,’” Schneider said. “It’s about building self-efficacy, and if you can get enough self-efficacy, you get collective efficacy in a neighborhood — a community where people will get involved because they can make a difference. They’ve seen how they make a difference.”

Residents of the neighborhoods surrounding Kilbourn-Kadish are able to contribute to the progression of the park while also reaping the rewards of having a safe and developed gathering area.

“The park’s gotten a pretty good rep. But that doesn’t come easy,” Schneider said. “It comes over time for people to see it as a place where people can go and be comfortable and have an enjoyable experience.”

All the special events and programming aside, what Schneider said the space is designed for is simply to be filled with people.

“During the summer, it’s not unusual when you walk through the park, there’ll be just people sitting up on the hill just enjoying that incredible view,” he said. “I mean, the view is just, I don’t know … there aren’t many views like it.”