Democratic attacks on choice and charter schools favored by minority voters could backfire.

Two recent events offer an insight into a part of the Trump campaign’s strategy to win the 2020 election. Oddly, some Democratic politicians seem intent on making this strategy a successful one.

The first of the two events was the so-called “Wisconsin School Choice Student Showcase” at the state capitol in Madison. It was attended by Vice President Mike Pence and US Secretary of Education Betsy DeVos, as well as a number of Wisconsin Republican politicians and students from several Milwaukee choice schools. Both the Milwaukee Journal Sentinel and the Wisconsin Examiner covered this rally.

The second was a shout-out in President Trump’s State of the Union address to Philadelphia fourth grader Janiyah Davis and her mother:

Janiyah and Stephanie are in the gallery this evening. Stephanie, thank you so much for being here with your beautiful daughter. But Janiyah, I have some good news for you. I am pleased to inform you that your long wait is over. I can proudly announce tonight that an Opportunity Scholarship is going to you, and you will soon be heading to the school of your choice!

As a follow-up Philadelphia Inquirer story noted, the choice of Janiyah as an example of “failing government schools” was odd since she actually attends a highly coveted charter school. Davis is “one of 900 students selected to attend the MaST (Math, Science and Technology) Community Charter School III last year,” the Inquirer reported. “The school, which opened in the fall, received 6,900 applications.” As a charter school, it charges no tuition.

While it should surprise no one that neither Trump nor his campaign are sticklers for accuracy, the analysis in my last column on the Milwaukee educational scene shows why the Trump strategy may be effective in helping assure his re-election.

Based on data in the Department of Public Instruction’s School Report Cards, about a quarter of African American students in Milwaukee attend private schools with the aid of state vouchers through the Milwaukee Parental Choice program, as shown in the pie chart below. 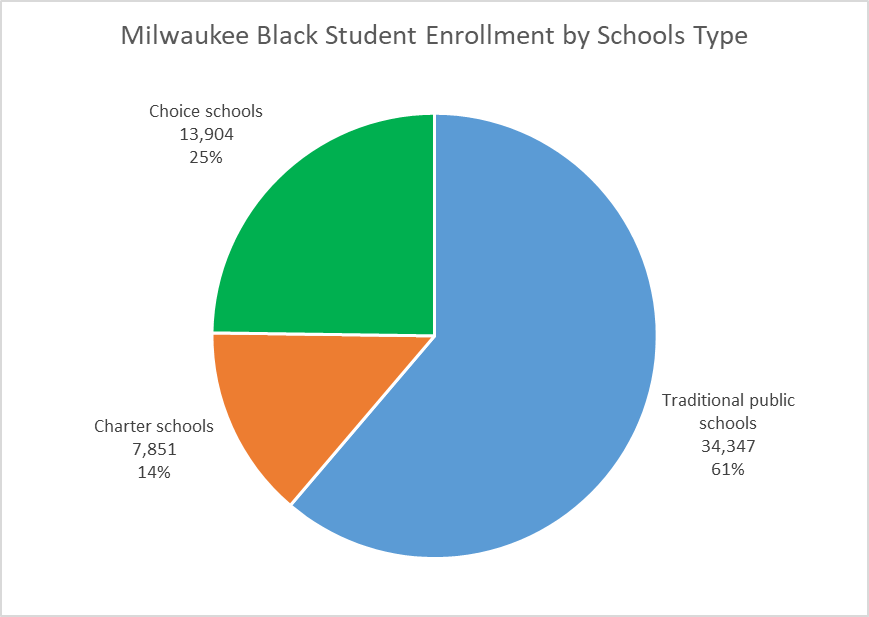 As the next chart shows, a somewhat larger proportion of Hispanic students attend Choice schools. 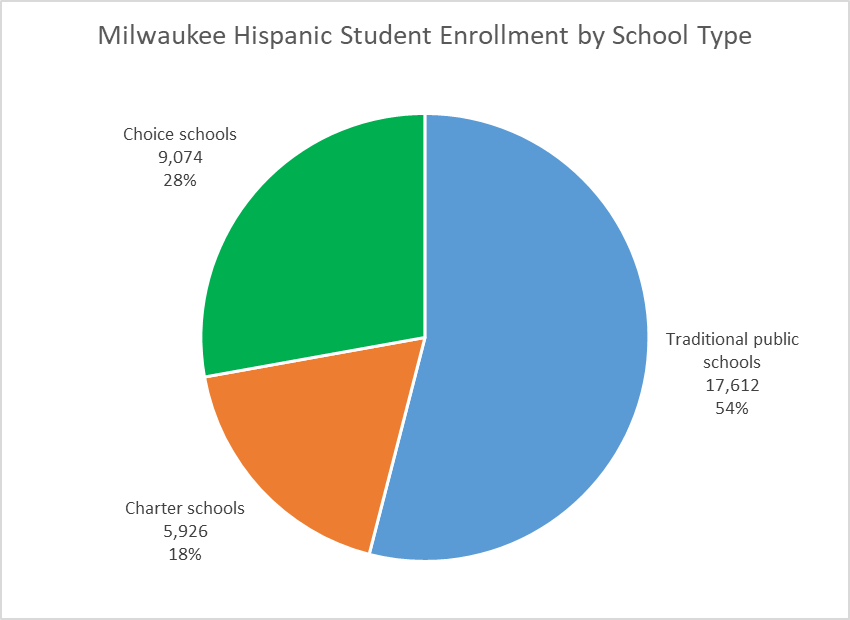 In 2016, Hillary Clinton lost Wisconsin by 22,748 votes. Polls continue to suggest that Wisconsin is up for grabs in 2020. Without a good turnout from black and Hispanic voters in Milwaukee—and even with it—the eventual Democratic presidential candidate faces a challenge to win Wisconsin and the electoral college.

The strategy underlying the Pence-DeVos visit and the State of the Union shout out is clear: try to dampen enthusiasm among black and Hispanic parents and thereby holding down the Democratic vote in those communities. Trump’s implicit message to parents of children receiving school choice vouchers is that Democrats are not your friends. Will it be successful?

It is odd, therefore, that five Wisconsin Democratic state legislators have chosen this time to give credibility to Trump’s message. They recently sent a message to the whole state Senate and Assembly soliciting co-sponsors for a proposed bill that would phase out Wisconsin’s Choice programs. As summarized in the accompanying analysis by the Legislative Reference Bureau:

The five sponsors of this bill are Senator Chris Larson and Representatives Jonathan Brostoff, Marisabel Cabrera, Chris Sinicki, and Jodi Emerson. Except for Rep. Emerson, all are from Milwaukee.

As Alan Borsuk pointed out in a recent column, this initiative is likely to go nowhere. Comparing the state of Milwaukee education to the movie Groundhog Day, in which Bill Murray repeats the same day over and over, Borsuk says he is more focused on that movie than usual, “thanks to Mike Pence and Jonathan Brostoff.” He goes on to argue that:

School choice, including vouchers, has reached a locked-in point in Wisconsin. That will be true as long as there is such deeply divided control of state government, and it could well be true even if the partisan divide shifts.

Brostoff, Larsen, and company persist in describing the Choice program as a “failed experiment.” This description runs counter to the message from DPI’s School Report Cards. The next chart shows the average accountability scores, weighted by enrollment, traditional public, charter, and choice schools in Milwaukee. While there is wide variation among schools in each category, on average both charter and choice schools fall on the line between “meets” and “exceeds expectations” whereas traditional public schools are rated as “meets few expectations.” 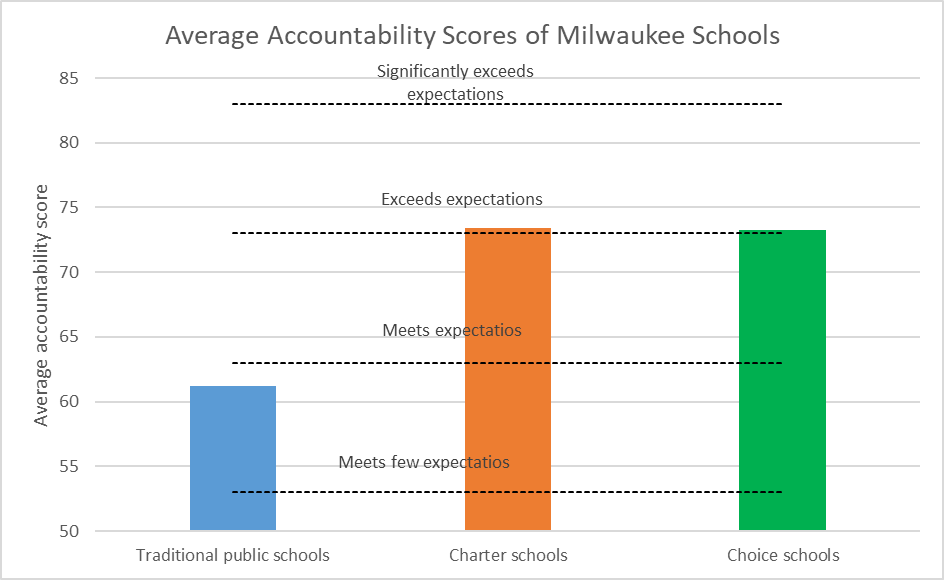 Students in the Choice program—or their parents—must have made a positive decision to choose and apply to the school. Some critics of the programs argue that the higher commitment to education accounts for the higher scores. The problem this raises for Democrats is that parents especially committed to their children’s education are likely to be particularly hostile to a party that is perceived as trying to overrule their educational decisions.

The proposal assumes that ending the Choice programs would free up funds that could be used for other purposes, such as reduced class size. Yet nowhere in the proposal is any discussion of the fate of those students no longer able to attend private schools, as though its assumed they simply disappear. In the real world, any expected surplus would likely be consumed by the cost of their education at a public school

The Trump re-election campaign hopes to use programs that allow low-income parents to send their children to private schools to weaken support for Democratic candidates among Hispanic and African American voters. It is odd that legislators in Wisconsin have decided to add credibility to Trump’s arguments.