A Report Card for Milwaukee Schools

Every year the Wisconsin Department of Public Instruction issues its “school report card.” These rate most schools in the state using a variety of school performance measures. Originally the report cards were limited to traditional public schools, under the direct control of school boards, and charter schools, which are independent public schools answerable to the chartering entities. In recent years, private schools that participated in Wisconsin’s “Choice” program, which pays some students’ tuition, were added to the report card.

The first graph shows enrollment totals for the three types of K-12 schools which accept public money, calculated from data in the school report cards. Of all the schools that accept public money, a bare majority (54 percent) of Milwaukee students attend schools that are administered as traditional public schools. Thirty two percent attend private schools that participate in the Milwaukee Parental Choice Program. The other 14% are in charter schools, public schools with their own independent administration (a small number of them are “instrumentality” charter schools which employ Milwaukee Public Schools teachers, but the state data does not separate them out.). 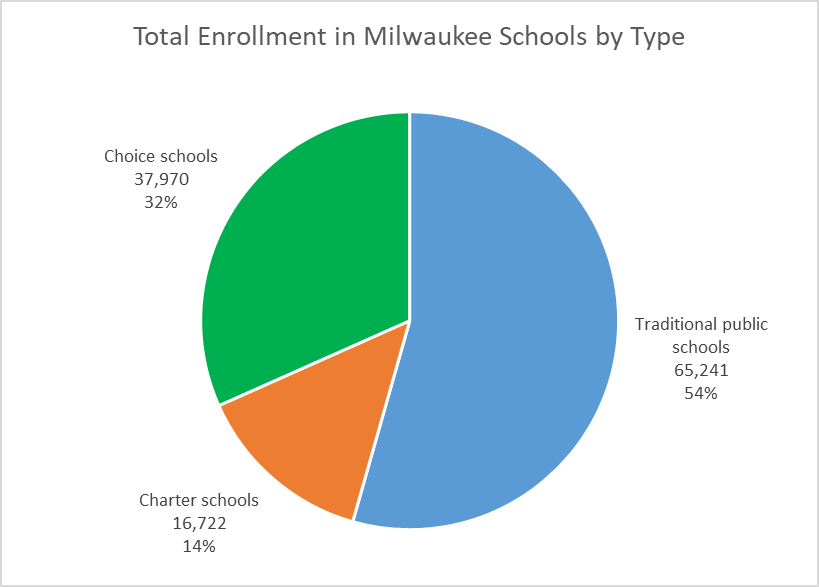 The next chart shows enrollment by the two largest ethnic groups–black and Hispanic students. I estimated these totals by multiplying each school’s student enrollment by its reported black and Hispanic percentage and adding up the numbers. It is safe to predict that these numbers are under-estimates. For example, in recent years, Wisconsin has allowed students to report two or more ethnicities, rather than forcing them to pick one. 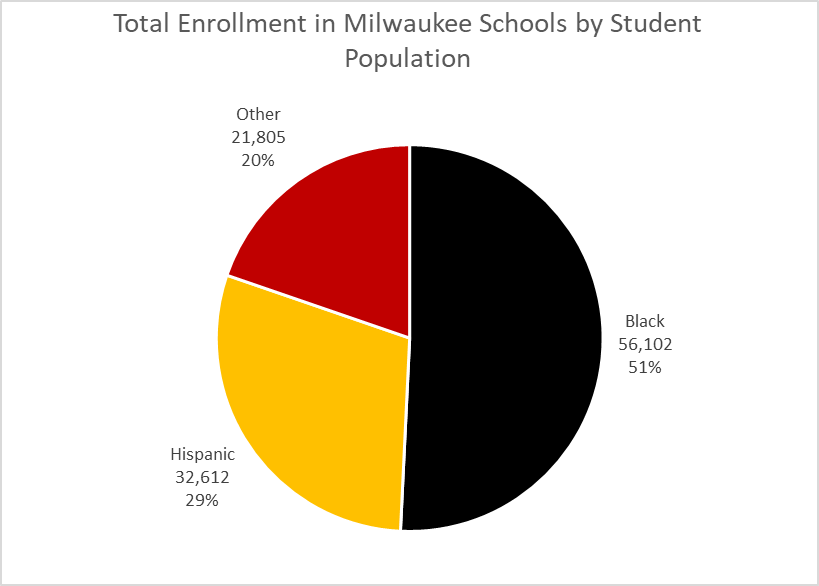 Because of Milwaukee housing problems and other factors, a number of Milwaukee schools have become heavily Hispanic or heavily African American. The former are mainly on the South Side while the latter are in the north and northwest sides of the city. To better understand those patterns, I looked at three groups of Milwaukee schools: those whose student populations are at least 70 percent Hispanic, those at least 70 percent black, and the remaining schools that are neither.

The movement towards choice and charter schools has been particularly strong on the South Side. This is reflected in the chart below, showing that combined enrollment in charter schools and the choice program out number that in traditional public schools. 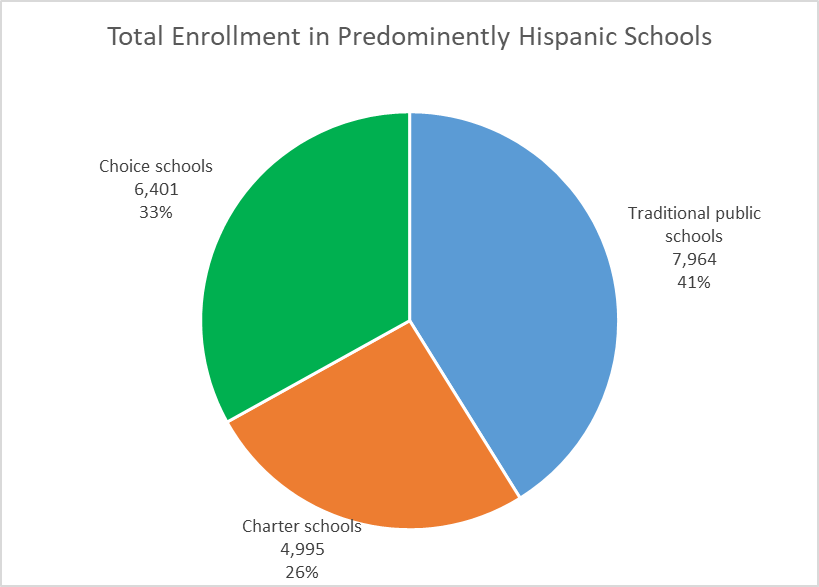 The next graph, called a “bubble chart”, shows the individual schools with 70 percent Hispanic enrollment. As in the chart above, traditional public schools are shown in blue, charter schools in rust, and choice schools in green. The horizontal axis shows the percentage of students who are Hispanic. The size of the bubble reflects school enrollment. 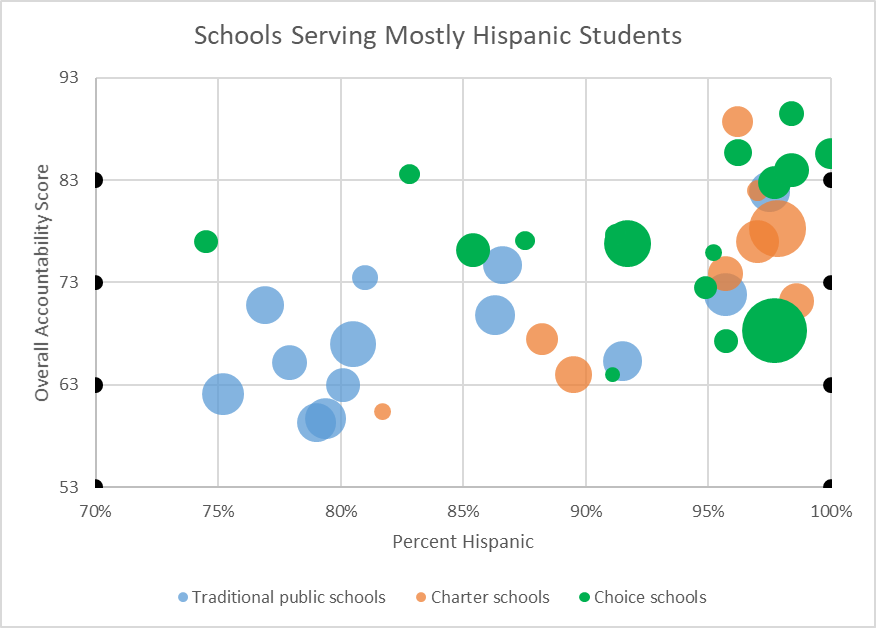 On average MPS traditional schools serving a predominantly Hispanic population are rated lower than the charter and choice schools serving a similar population. Several fall below the score of 63 required to get a “meets expectations” rating. The average score for the traditional schools is 67.9 (“meets expectations”), compared to 74.9 for the charter schools and 76.4 for schools in the choice program — a rating of “exceeds expectations” for both.

Of the predominantly African American schools whose population is 70 percent black, half (49 percent) to the students attend traditional MPS. The other half is split between and choice schools (38 percent) and charter schools (13 percent). 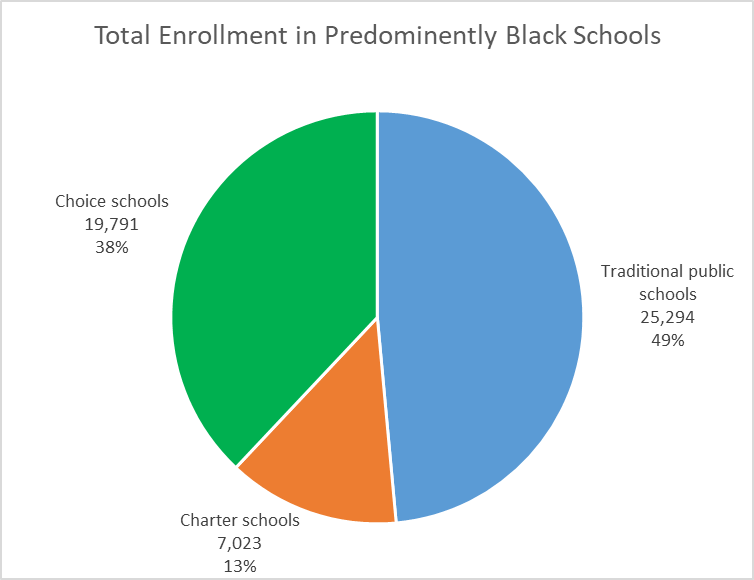 The bubble chart for predominantly black schools shows that many are not doing well, particularly among the traditional MPS schools. In fact, compared to the data for the Hispanic schools, I had to extend the vertical axis downward, from 50 to 20 to accommodate all the schools “failing to meet expectations. 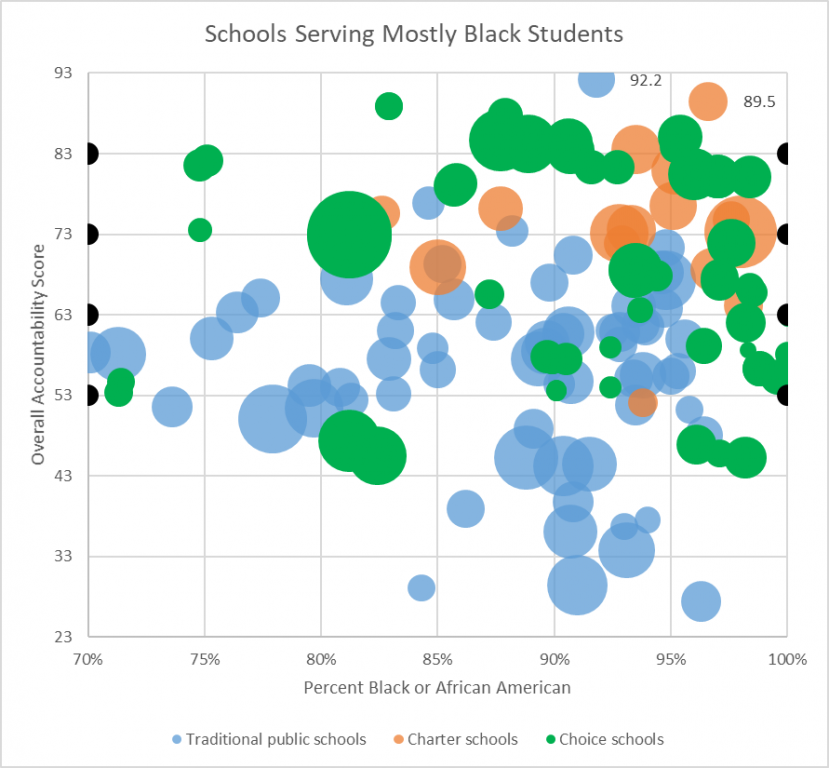 Milwaukee Excel, with a score of 89.5 (“significantly exceeds expectations”) is a charter school chartered by the Milwaukee School Board. Standing out even more is Marvin Pratt with a score of 92.2, a traditional MPS school.

Finally, the remaining 40 percent of Milwaukee students attend schools that are not overwhelmingly black or Hispanic.  As the next chart shows, these students are much less likely to attend charter or choice schools than are the two previous groups. 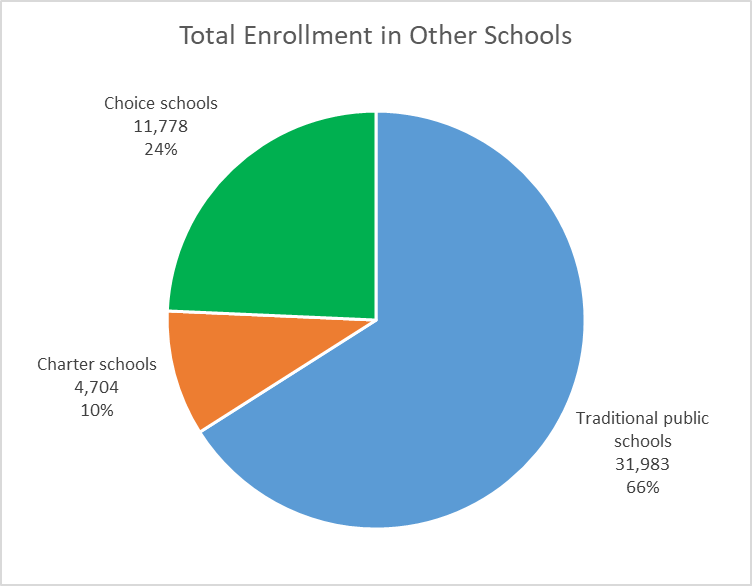 Total Enrollment in Other Schools

Again, for this population as a group, charter and choice schools (76.5 and 75.6 respectively — are both at the level of “exceeds expectations”) and outperform traditional MPS schools (65.4 — “meets expectations”). The large MPS high schools without admissions requirements particularly pull down the MPS average.

One factor, I think, results from one of the legal restrictions on charter schools. No child can be assigned to a charter school. That means that every child at the school (or at least their parents) has chosen to go to that school. One hypothesis is that the act of choosing a school may indicate a level of involvement that may be absent in other students’ lives.

Another factor is the notion common among school board members that a good school should serve the needs of every student. Too often, the result is a school that doesn’t serve anyone very well.

I served on the advisory committee that recommended the school board approve the Milwaukee Excellence Charter School. Both board members were opposed; one kept repeating that she would never send her own child there.

In its application for a charter, the Milwaukee Excellence Charter School requested a building in zip code 53206, widely described as the most stressed Milwaukee neighborhood. This would force the founders to think seriously how to meet the needs of kids living in that area. After just a few years of operation Milwaukee Excellence Charter School is one of the most highly ranked in the city.

In looking through the MPS schools rated “not meeting expectations,” I am struck by how many would have been considered most successful 20 years ago. I think part of the explanation is that the student population changed over those years, but the school did not rethink what that population needed.

But so long as MPS schools continue to ignore the evidence of success by  choice and charter schools, it is likely they will continue to lose students to those schools.

6 thoughts on “Data Wonk: A Report Card for Milwaukee Schools”