How German Is It? Very 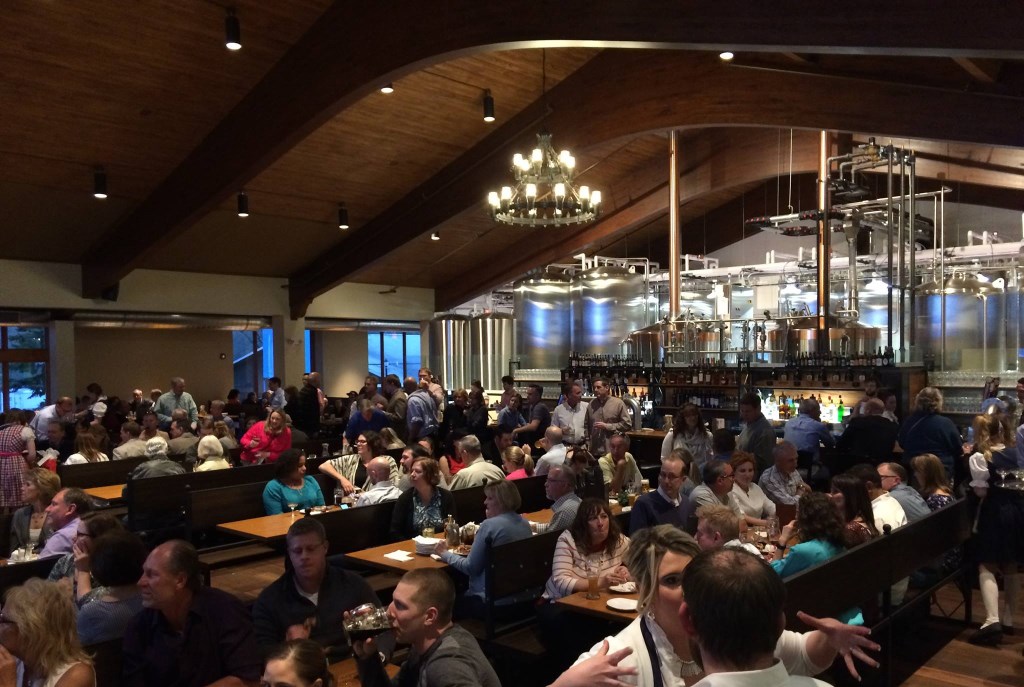 When people ask about local German restaurants, the Bavarian Bierhaus isn’t the first name to come up. Maybe it should. This brewery and restaurant in Glendale was remodeled in 2016 after the great beer halls of Munich. There’s history at this location as it’s housed local German clubs for 70 years. It’s also the site of Milwaukee’s original Oktoberfest, there’s live polka bands every Friday and Saturday night, and they brew damn good beer.

Both times I came for lunch, I felt lost in the huge beer hall with its long communal tables, deserted, except for my companions and me. This was soon remedied as afternoon diners strolled in to join us at our table. I could picture that same hall on a weekend night, overflowing with beer-drinking customers, polka music, and people dancing. It would be filled with the spirit of Gemutlichkeit. 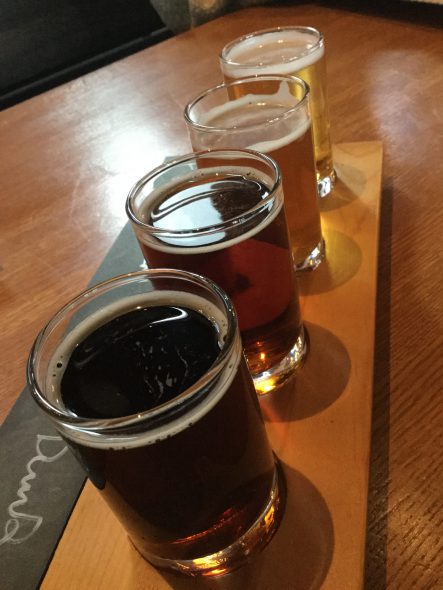 Beer flight at the Bavarian Bierhaus. Photo by Cari Taylor-Carlson.

We found a good way to start a meal was with a beer flight from the selection of Haus Bier. Since none of the beers were familiar to my companions and me, we asked the bartender to pick four and line them from light to dark. We noted, as they increased in color, the alcohol content, according to the beer menu, also increased until we arrived at number four, our favorite, Unkel Dunkel.

From Starters, we ordered Flammkuchen, a flatbread coated with cream cheese, bits of crisp bacon and slivers of red onion. When a companion, who lived in Germany for two years, mentioned to our server that the flatbread needed more red onion to be authentic, she offered to amend the dish. We decided the amount of bacon more than compensated for the scant red onion.

There were a couple more Starters that sounded especially interesting, Pig Skins with Warm Bier Cheese, and the Bavarian Egg, wrapped in Bratwurst, breaded, fried, and served with sweet mustard.

We also found each of the three soups could easily double as a complete meal for light eaters. The Baked Bavarian Onion Soup, topped with melted Emmenthaler Swiss and Mozzarella, had rich complex flavor in the broth, a good test for an onion soup. The crusty cheeses overflowed the bowl and coated crisp pretzel croutons. To add more flavor, hidden underneath were chunks of sausage.

Likewise, the Bier Cheese Soup was a dense and filling bowl of beery cheese or maybe cheesy beer. It was hard to tell which dominated the soup. The superstar on the soup menu was the Hungarian Gulasch (yes, that’s how they spell it), braised beef in another dense rich complex broth. You could put that gulasch on noodles or spatzle and call it a meal. (In fact, they do.) It was so much more than soup. The chef filled the container with chunks of beef in a scant broth that hinted of dill, and that was it, a hearty serving of dark, rich fork-tender delicious beef in a bowl.

And yes, if you want the same gulasch with spatzle, you can order it from Bavarian Specialties, call it dinner, and pay $14.00 instead of $6.00.

Another Bavarian Specialty, build Your own Schnitzel, came with several choices. First, there’s chicken or pork, then fries or spatzle, and finally you have to choose among Jager Mushroom Gravy, Black Forest with Ham and Emmenthaler, Ham with Bier Cheese, a sunny-side-up egg, the Nashville with Hot Sauce, and the Zigeuner, with Tomato Sauce and Peppers.

My companion found the tasty pork Zigeuner similar to the German version she had in Munich and enough for two meals.

If you want the real Wiener Schnitzel made with veal instead of pork or chicken, you have to pay more, $22.00 instead of $19.00. The veal comes with spatztle and lingonberry jam. Although we didn’t try this one, the chicken and pork schnitzel, as well as everything else we tasted, made it clear the chef and the staff know their way around a German menu.

Unless you’re a vegetarian, you don’t want to visit without trying a Wurst Platter. Our platter at the Bierhaus came with two sausages, Knackwurst and Nurnberger. Both were spicy, not greasy, and full of juicy flavor. They were accompanied by the requisite sauerkraut and German Potato Salad. Even the kraut was worth a mention, as it was tart without being overly sour.

You can also order a Hamburger on a Kaiser Roll, A Classic Reuben, Rollbraten, or pulled pork, a Sauerbraten Sandwich, or my choice, the Black Forest Chicken Schnitzel Sandwich. For this giant sandwich, chicken schnitzel topped with sliced ham and emmenthaler Swiss, the chef kept the schnitzel crisp underneath an impressive load of ham and cheese creating a succulent marriage of crunchy, salty, and cheesy. It came with fries. Next time I’ll upgrade to a $4.00 side and order a Potato Pancake, German Potato Salad, or Mashed Potato with Bier Gravy.

A mural painted to resemble Munich covers a side wall, a reminder that this is indeed a German Bierhaus with food and a brewing operation that turns out more than 2,000 barrels a year. Our server suggested the hall can get rowdy on weekends, but no one cares when the beer flows, the schnitzel is crisp, and the polka music sets a joyful tone. 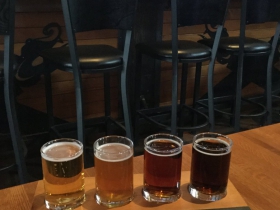 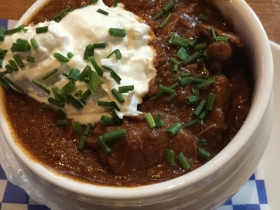 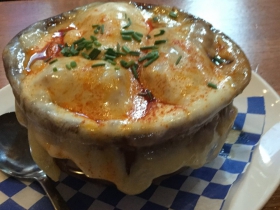 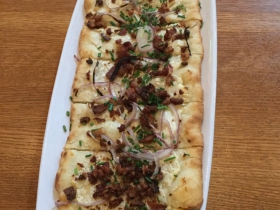 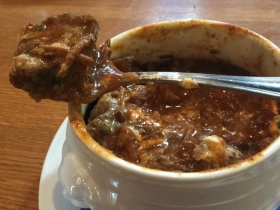 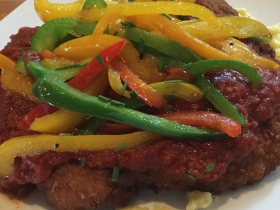 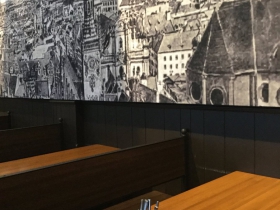 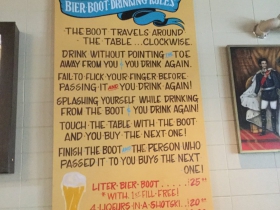 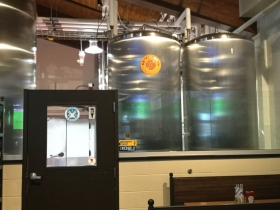 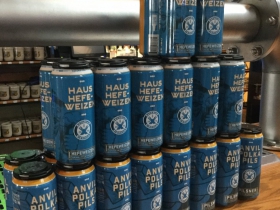 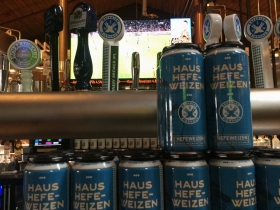