Republicans Bash Evers Before He Speaks

Condemn governor as too partisan, but his State of State speech is mostly conciliatory.

By Melanie Conklin, Wisconsin Examiner - Jan 23rd, 2020 03:08 pm
Get a daily rundown of the top stories on Urban Milwaukee 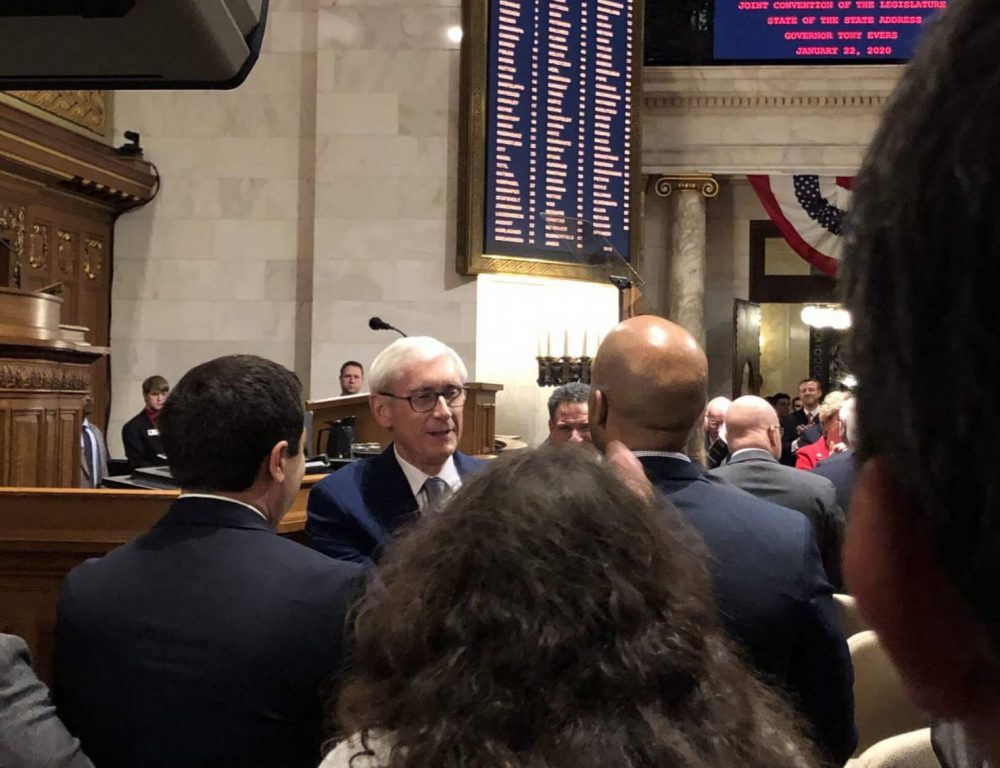 Before Gov. Tony Evers entered the Assembly chamber to give his second State of the State address on Wednesday evening, the debate around the Capitol was whether his message would offer a conciliatory olive branch of bipartisanship or an impassioned vision of progressive principles launched from his bully pulpit.

Republicans were betting on the latter as they held a news conference four hours before Evers began to speak to complain about how partisan Evers has been.

Just in case any reporters did not understand the concept, Vos began by reading the definition of bipartisanship out of Webster’s dictionary.

“That’s the contrast we’re facing here today,” added Nygren. “We’re trying to work together across the aisle for the benefit of all Wisconsinites. I think it’s time that the administration understand that we are a co-equal branch of government, and that we have a vital role to play as well. So I look forward to that new change of outlook from the administration in the near future.”

In his State of the State address, Evers spoke of many successes as a joint effort. As he began handing out kudos for accomplishments, he praised numerous Republican and Democratic legislators. He downplayed any divide.

“As I reflect on my first year in office, although there were setbacks and occasional political posturing  — what I call ‘huffing and puffing’ — we also had a lot of success, and I am proud of everything we accomplished in just a year’s time.”

That said, he did get in a few partisan talking points, including this comment early on: “This past year we also brought science back to the state of Wisconsin. And we acknowledged that climate change exists, and it’s a threat we need to start taking seriously.”

Evers also jabbed the Republicans for turning away $1.6 billion to expand Medicaid. He pointed out other contrasts between himself and former Gov. Scott Walker (without naming names), such as his push for inclusion and respect for state workers, and his decision to restart the state pardon process and work on criminal justice reform. “For the first time in more than eight years, a governor stepped foot inside of one of our correctional facilities — and actually, not just one, I visited six.”

The central topic of Evers’ speech was supporting Wisconsin’s struggling agricultural economy. Rural Wisconsin is a topic Republicans also care about — so his extensive proposal could be considered a bipartisan opportunity. But his push also backed Republicans, who were already annoyed by his recent letter assigning them “homework” and his attempts to force a previous special session on gun control, into a corner.

Rejecting a special session called to help rural Wisconsin — which is represented by many Republican legislators — would put them in a bind were they to ignore this call as well.

And Evers did take a shot at the Trump administration’s farm policy and Ag Secretary Sonny Purdue’s controversial quote from the World Dairy Expo, where he appeared to dismiss small farms.

Said Evers:  “We’ve endured the consequences of unnecessary and unproductive tariffs and trade wars. And we’ve heard people who’ve said there’s no place for small farms anymore—they ought to go big or bust.”

“I am not under the misguided belief that what I’m proposing today is the silver bullet,” said Evers. “In the coming months, it’s going to take more listening than talking to hear from our farmers and our rural communities about how we can continue to invest in agricultural and rural prosperity across our state. But we have to start somewhere, and we have to start today.”

With Republican leadership only planning to meet for a few more times before going home for the year, it remains to be seen if the work that Evers laid out can get done. In addition to the major areas above, other initiatives he outlined were:

Evers’ speech concluded with a tacit reprimand aimed at the Republican legislative leaders, who have said they only plan to stay in session through February in the Assembly and March in the Senate — and meet for only two or three more session days during that time.

“We’ve got work to do,” Evers told the legislators. “There’s no rest for the elected, folks, and we’ve got a lot to get done before anyone takes a vacation.”

More about the 2020 State of the State

Read more about 2020 State of the State here