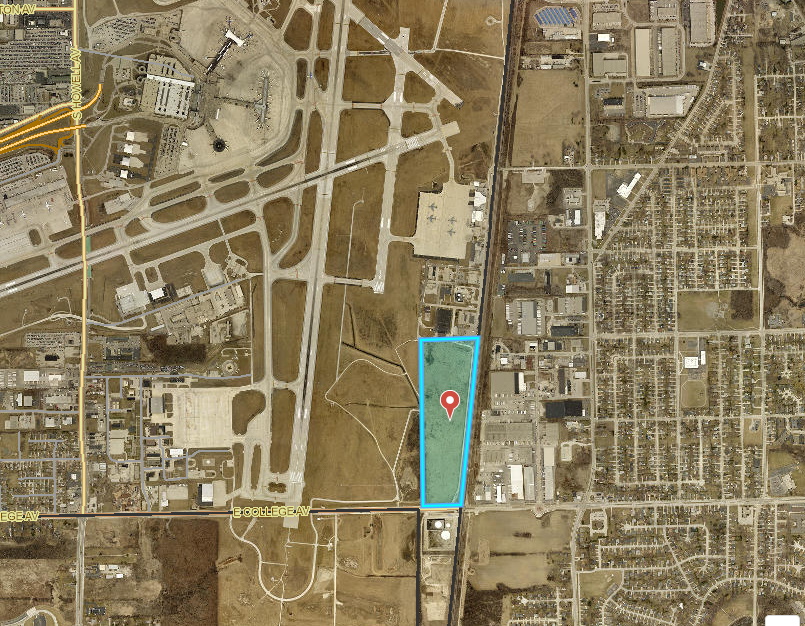 The Milwaukee Common Council will vet a proposal next week to lease a closed landfill to We Energies to build the largest solar array in the city.

Capable of generating enough electricity to power 400 homes, the solar project would be built on a site at the southeast corner of Milwaukee Mitchell International Airport.

We Energies, through its Solar Now program, would lease eight acres from the city for an annual cost of approximately $100,000. The lease payments would depend on the amount of electricity generated, but a city report notes the estimate is based on 30 years of solar irradiance data for Southeastern Wisconsin. The city would dedicate the revenue towards funding other renewable energy initiatives.

The utility would build a solar farm it would own and operate with approximately 8,000 panels capable of producing 2.25 megawatts. The installation would move the city closer to its “25 by 25” goal of having 25 percent of its electricity needs (15 megawatts) generated by renewable sources by 2025.

“This would go a long way to helping us reach our goal,” said Mayor Tom Barrett in an interview.

The 44-acre site at 1600 E. College Ave. is a natural fit for solar power, said city sustainability director Erick Shambarger. He said its past use as a landfill, now sealed with clay, makes it unsuitable for development. It’s also unlikely, given its proximity to the airport, that anything would be built nearby that blocks sunlight. An added bonus is that the site is already secured because it connects with the Wisconsin Air National Guard’s base.

Shambarger said the Air National Guard is backing the project. “They need to keep running in the case of a power outage,” said the sustainability director of the potential for attacks to the electrical grid. The solar array will support those efforts by providing a level of redundancy.

The proposal comes after the city and We Energies sparred in January 2019 over a proposed solar installation planned for six city-owned buildings. The utility objected at the state Public Service Commission (PSC) to an interconnection request that would have allowed a third-party, Eagle Point, to install solar panels capable of generating one megawatt across the buildings and sell the power back to the city.

We Energies suggested the city take advantage of its state-approved Solar Now pilot program. Under the program, first approved in December 2018, the utility leases space to install solar panels and makes lease payments. Individual customers can have up to 2.25 megawatts installed.

The city ultimately punted in favor of a smaller proposal, buying its own panels and hiring Eagle Point to install them on three libraries. The panels, now operational, are capable of generating 209 kilowatts and yield approximately $35,000 in annual savings.

So why work with We Energies now?

“We feel that in order to reach this goal, it’s important to work with as many suppliers as possible,” said Barrett. The mayor, Milwaukee County Executive Chris Abele and other local officials submitted a letter requesting the utility create more renewable energy programs in early 2018.

Barrett and Shambarger said the city has an “all of the above” approach to generating solar energy.

The city’s Environmental Collaboration Office began exploring options to leverage the Solar Now program. “We didn’t want to put it on more rooftops because frankly, we could do our own,” said Shambarger. Instead they looked for vacant, city-owned land, ultimately determining that the E. College Ave. site was best suited for the project.

“We have a program in front of us we can use. We found the perfect site for it,” said Shambarger. The lease would run for a period of 20 years.

Barrett, in noting the 25 by 25 goal was important to him, praised Shambarger’s commitment to finding solutions.

The proposal could catch flak from at least two members of the Public Works Committee when its reviewed Wednesday. “Hell will freeze over before I vote for doing business with We Energies,” said committee chair Alderman Robert Bauman in January 2019 when the committee discussed the utility’s objections to the city’s third-party proposal.

Ald. Nik Kovac also objected to the utility’s behavior. “The fact they deliberately misinterpreted the law for their own advantage is not a controversial statement, it’s fact,” said Kovac. “They’ve done it before, they’re doing it now. Especially when they sweep in and offer their own deal.”

The Citizens Utility Board objected to We Energies’ Solar Now proposal when it was before the PSC because of cost concerns and the potential to harm the solar market in favor of its own proposal, exactly what Bauman and Kovac accuse it of doing.

The solar array would not impact the city’s bills from We Energies as the electricity would go directly into the grid. The city cannot construct its own solar array on the site without substantial regulatory hurdles because it is not connected to a city-owned building.

The city would receive the renewable energy credits associated with the array, an accounting tool used to track progress towards renewable energy generation. A report indicates the city will forego $591 per month in potential lease payments from We Energies in order to receive the credits.

The city currently spends approximately $4 million on building electricity and natural gas, $3.5 million on street lights, and $6 million on power for the Milwaukee Water Works.

The amount of solar power production in the city continues to grow. In addition to the new library installations and a 374-kilowatt array installed atop a Westown office building last year, a city report says at least 3.6 megawatts of solar energy have been installed in Milwaukee through January 2019 by public and private entities, including homeowners.

The city isn’t the only customer proposing to leverage the Solar Now program. We Energies media relations manager Brendan Conway said the utility had more interest than availability when the program was announced. He told Urban Milwaukee that customers requested over 90 megawatts of power, but the state authorized the installation of only 35.

The New Berlin School District was the first customer to have an operational array. In November the utility activated an array capable of generating nearly 2.25 megawatts on the roof of New Berlin Eisenhower Middle/High School. Conway said other installations are either under construction or in planning for the City of Racine, UW-Parkside, Washington County, Northland Pines School District in Eagle River and University Lake School in Hartland.

A total of five megawatts of generation capacity were online by the end of 2019 and the utility hopes to add 10 megawatts in 2020.

If the Common Council approves the solar installation it would be installed before the end of 2020, said Conway.