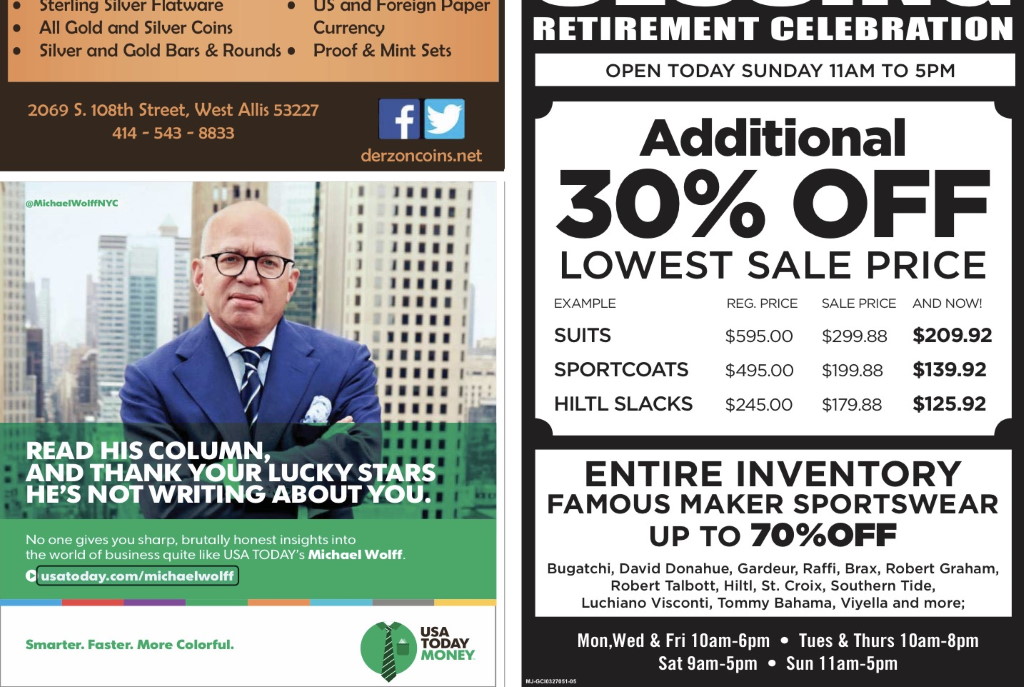 On Sunday the Journal Sentinel, whose display ads have been shrinking for more than a decade, had an ad spot to fill and so it added a promotion for USA Today, whose parent company (Gatehouse-Gannett) also owns the Milwaukee daily.

The ad was certainly punchy. It featured a photo of writer Michael Wolff, with this come-on:

AND THANK YOUR LUCKY STARS

HE’S NOT WRITING ABOUT YOU

No none gives you sharp, brutally honest insights into the world of business quite like USA TODAY’S Michael Wolff.

Except, to be brutally honest, Wolff hasn’t written a column for USA Today since January 2017. Which, by process of elimination, would mean no one now offers such brutally honest insights in the newspaper.

Twice a National Magazine award winner, Wolff has long courted controversy, but never more so than with his 2017 book Fire and Fury: Inside the Trump White House, which was widely praised and condemned for its scathing fly-on-the-wall portrait of Donald Trump, heavily based on off-the- record comments.

Wolff, as a USA Today story on him reported after his book was published, has been a “longtime fixture in New York media circles — with stints at New York Magazine, Vanity Fair, the Hollywood Reporter, USA TODAY and the Guardian” and “spent most of his career examining the intersection of business, celebrity and media.”

As for that stint at USA Today, Wolff presumably quit the column to concentrate on writing the Trump book. And given the ever shrinking staff and news coverage of USA Today and its many newspapers, it seems unlikely it will ever return.

I emailed JS editor George Stanley for comment and will certainly add his take on this should he ever respond.

Meanwhile, longtime JS columnist Jim Stingl wrote his farewell column on January 3, with a shoutout to the other veterans leaving the newspaper. Back in early December I wrote about the departure of Stingl and six other veteran journalists at the paper, noting that one other reporter was still likely to go.

That, Stingl revealed, is reporter John Schmid, best known for a watershed series, “Made in China,” co-written with Rick Romell, which documented the massive impact of Chinese trade on Wisconsin’s economy. Schmid was a quirky original, with a knowledge of international economics that led to variable but always notable reporting.

Categories: Back in the News, Media and Advertising

5 thoughts on “Back in the News: Journal Sentinel Promotes Long-Gone Writer”