Massive concrete structure on Michigan, built in 1980, could grow and add hotel. 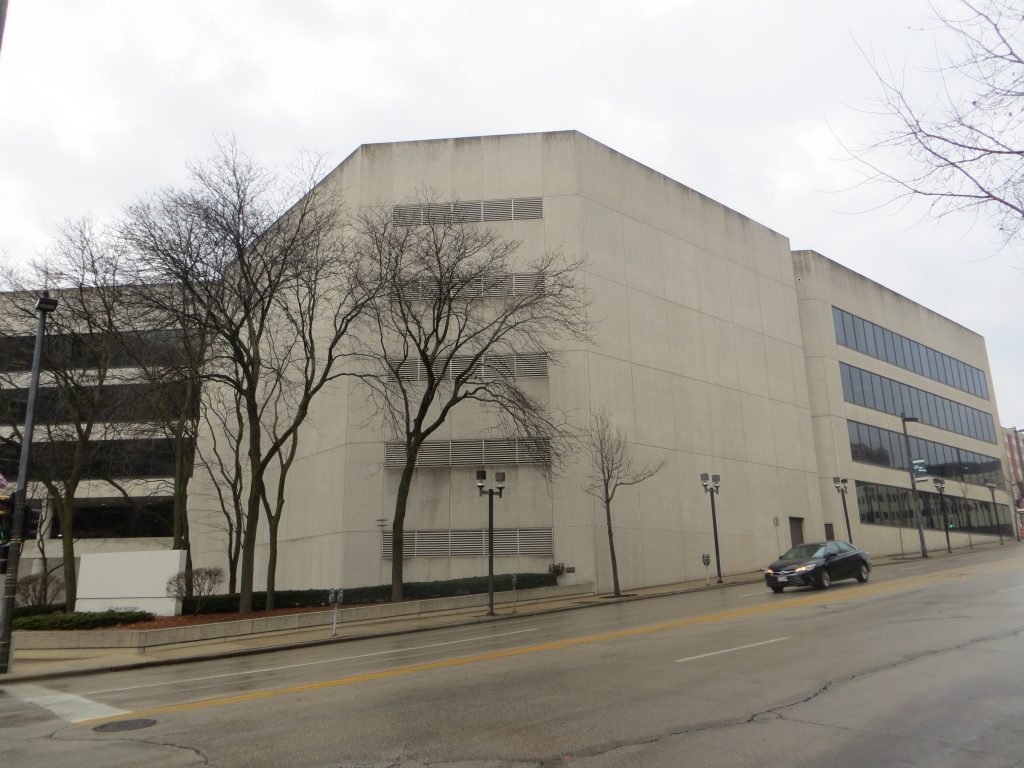 Developer Scott Lurie and his F Street Group announced in November its pending purchase of a 332,949-square foot office building that occupies the entire 2.93-acre city block at 501 W. Michigan St. The five-story concrete structure, visible from I-94, was constructed in 1979 as the Operations Center for Blue Cross Blue Shield of Wisconsin, where it housed as many as 2,000 employees at its peak. In January 1989 Time Insurance (now Assurant) bought it for $28 million. It also served as offices for Fortis Insurance, a successor company and most recently its successor Assurant, which had a skeleton staff of only about 40 remaining in the building at the time of the announcement. Building ownership was transferred among subsidiaries in October 2018 in a nontaxable transaction. At that time, a value of $9,297,900 was placed on the property which, with its attached 800-car garage, is assessed by the City of Milwaukee at $17,118,000.

The sale to Lurie is expected to close at the end of this month, at which time the sales price, not listed in the advertisement, or announced by the parties will be revealed when the transfer document is recorded.

The building has enormous floor plates of nearly 70,000 square feet, and has 332,947 square feet of finished area — that’s over 7 acres under roof. Enticingly, the assessor notes that the structure is designed to accommodate an additional four stories. Lurie envisions adding three floors, or about 180,000 square feet, atop the building, and using that portion as a hotel. He would like to find a single tenant (preferably one from out of town, bringing new workers) to occupy the entire existing structure as office space, beneath the hotel. The building is located along the future expansion route of the streetcar, which has its western terminus two blocks away at the Milwaukee Intermodal Station.

Real estate agent Bill Bonifas, who lists the property for CBRE, noted in a brochure that even without additional stories, the building, said to be in excellent condition, could benefit from a number of improvements:

The currently underutilized roof could be converted into a rooftop garden/patio, ideal for promoting employee and visitor engagement.  … A light well could be added, bringing natural light within the core, while enhancing connectivity between employees on different floors. … The rooftop could be explored for use as a heliport.

(This may be a real estate agent’s flight of fancy. Downtown hasn’t had a rooftop landing spot for helicopters since the Park East Hotel was envisioned in the 1950s and that use never took off.)

A Product of its Times

The late 1970s was not a high point for urban design. Downtown was considered to be an unsafe place, and large institutional buildings like this one did little to address street traffic other than that which led straight to the safety of its bunker-like parking garage. The main pedestrian entry here is set back from the street at an angle to the northeast corner, adjacent to an uninviting plaza, a portion of which is elevated about four feet, rendering it useless save as a raised garden bed for an uninspiring landscape. A monument sign at the northeast corner has the building’s address. Until November, it also had the logo of Assurant, since removed.

The site has a number of issues. For one thing, there is a multi-story grade change east to west so that the 20-foot-tall first floor at the N. 5th St. is below ground at N. 6th St. With the exception of the entrance and a couple of windows at the high point of E. Michigan St., the only thing a pedestrian sees is an expanse of blank walls interrupted only by service doors, loading docks and three separate levels of street access to the parking structure. The northwest corner has a chunk taken out to accommodate one of the city’s notorious “Pork Chop” right-turn lanes. The building is constructed close to the sidewalk, but not quite close enough, as it is dotted with scattered irregular planting nooks. It would be nice to see the lobby, set at a 45-degree angle, expanded all the way out to the northeast property line, perhaps equipped with retail and restaurant space, such as seen in the 411 E. Wisconsin Ave. building. Lurie promises that the property will have a different street presence after redevelopment.

Was Site of Interurban Terminal

Block 78 of Kilbourn Town, which this property occupies in its entirety, was fully developed well before the end of the 19th century, at which time there were dozens of buildings located there, ranging from sheds to the Rail Road House Hotel, at what was then 85-5th St. In the center of the block was the A. Hannan & Son Carriage Factory. By 1910 the factory was the Boston Store Stables. (We tend to forget that just a century ago there were tens of thousands of horses living in structures scattered throughout the city.)

By 1916 the buildings along 6th St. were torn down to construct a terminal for the Chicago North Shore and Milwaukee Railroad, which dispatched trains hourly between the Cream City and its windy counterpart to the south until the “North Shore Line” ceased operations in 1963, signalling the end of the Interurban Era. Other buildings on the block had been dispatched beginning as far back century ago. In 1918 rear additions were removed from some buildings here. Five buildings were wrecked in 1922, with a few more in 1926. In 1950 a “1 story flat house” that must have been incredibly old (and decrepit) also was torn down.

By 1949, with most of the structures gone, much of the property became a surface parking lot. It was one in disrepair, it appears, since on July 24th, 1958 the inspector issued an order to Vallier Parking. “You are hereby notified to provide a dust-free surface on the parking lot.” This presumably involved paving the dusty lot. In August 1964 the passenger terminal and a 2-story brick warehouse (likely the old carriage factory) were also razed. The “North Shore Line” still owned the property, and a permit was issued on December 22nd, 1964 to Howard’s North Shore Parking of Highwood, Illinois to “Enlarge and Extend Present parking lot. Former occupancy: Milwaukee North Shore Depot.”

In 1965, the James T. Barry Co. erected two 4′ by 8′ signs announcing “100,000 Sq. ft. available for development.” As an inducement, an additional sign indicated that a portion of the block was to be the “Future Site First Methodist Church.” What appears to be the final remaining structure on the property, a one-story frame shed suffered demolition, the ultimate penalty for deferred maintenance.

The Methodists were ordered to repave their parking lot in late 1971, but considering the (never realized) plans for a church building there, the deferential inspector deferred enforcement until the following year, saying in a letter to Rev. Ellsworth Riemer, that the city “does not want the lot to be required to be paved if there is any immediate chance that it must later be destroyed for the purpose of building a church.”

By the end of the decade, Brust and Zimmerman designed the building and its parking structures. It received its certificate of occupancy in 1981. Now, nearly forty years later, it awaits a new fate. It may seem curious, indeed, that it was not chosen as the new facility for American Family Insurance Company’s new Milwaukee building, since it has always served that industry. But times and tastes have changed. 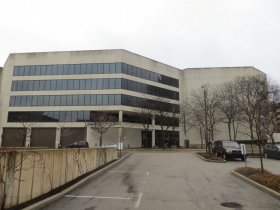 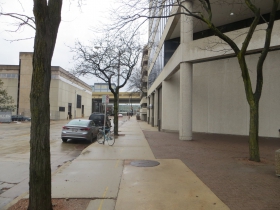 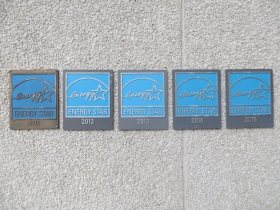 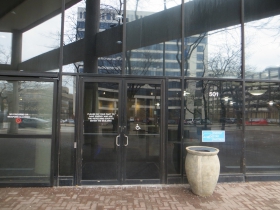 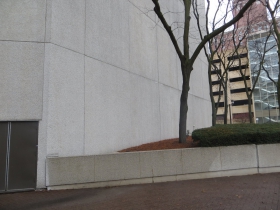 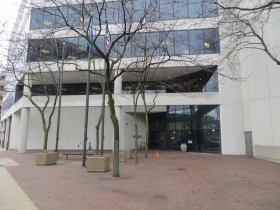