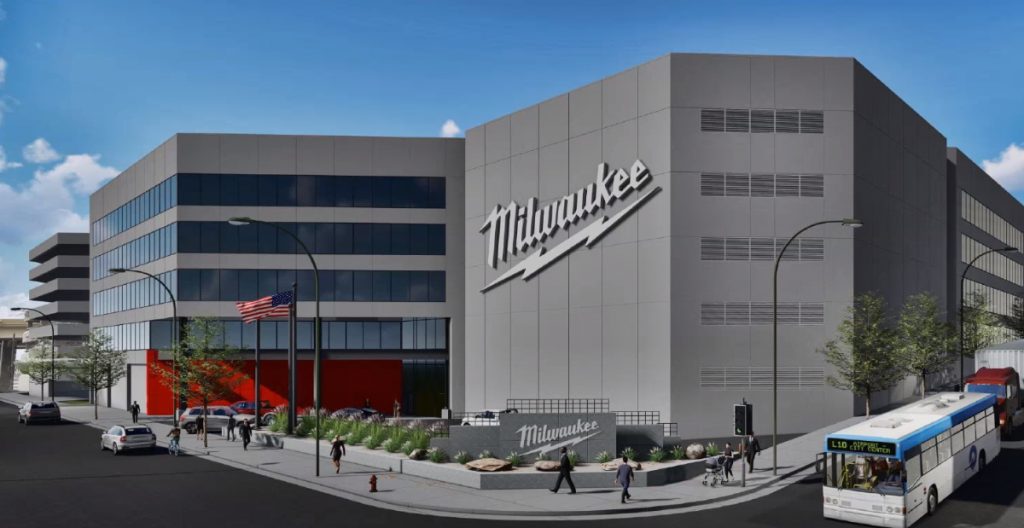 Milwaukee Tool‘s proposal to bring up to 2,000 jobs to downtown Milwaukee in exchange for up to $20 million in city cash was subject to almost four hours of debate Tuesday by the Common Council’s Zoning, Neighborhoods & Development Committee.

“One of the reasons we want to expand into the city of Milwaukee is to draw on a larger and more diverse labor pool than we are able to today,” said company chief financial officer Ty Staviski. The Brookfield-based company also needs space, and quickly. It estimates it is currently short space for 800 employees. “The jobs we are looking at adding are all new jobs, some of those have been filled already.” It expects the average salary of the jobs to be $75,000.

And while a number of community leaders testified in support of the agreement and its expected spillover benefits, council members are more concerned with what’s not in the deal than what is. They amended the agreement to add a reporting requirement on employee race, gender, residency and wages.

The amendment is seen as a compromise over a labor group’s push for a community benefits agreement to establish pay assurances and job protection for the contracted service workers who will support the office facility at 501 W. Michigan St.

Milwaukee Tool is pledging to mandate those contractors pay individuals at least $15 per hour, but has not agreed to a broader agreement like Milwaukee Area Service and Hospitality Workers Organization (MASH) is calling for.

Mayor Tom Barrett and DCD Commissioner Lafayette Crump pushed back against forcing the company to agree to a community benefits agreement after the initial deal was negotiated, with the mayor equating it to changing the rules after the game has started.

Alderman Robert Bauman pointed out that Barrett signed a 2019 council policy, known as CORE, that calls for $15 per hour minimum wages and worker protections.

Get a daily rundown of the top stories on Urban Milwaukee
“The CORE resolution is a resolution,” said Barrett, contrasting it with the MORE ordinance which applies to construction hiring when city financing is involved. “By its wording, I don’t think it applies because the individuals we are talking about are not employees of Milwaukee Tool.” But, he said the company was complying with the spirit of the agreement.

Barrett said he would support a future ordinance to codify the CORE standards, but didn’t think it was fair to change the deal on Milwaukee Tool. Crump echoed those sentiments during his speech and said rejecting the agreement would send a “chilling message” to other companies considering moving into the city.

Bauman said Barrett and Crump were being disingenuous. He said the CORE policy was structured as a resolution to avoid running afoul of state law.

The committee ultimately endorsed the deal on 4-0-1 vote, but not before adding post-construction job reporting requirements to the deal and attempting to create a framework to avoid future controversy on similar deals.

The company, via DCD, would be required to report on employee wages, race, gender and residency on an annual basis throughout the life of the 20-year deal.

“It’s time to put our money where our mouths are and get to work finding a compromise,” said Alderwoman Marina Dimitrijevic in introducing her amendment.

DCD senior economic development specialist Dan Casanova said the company would already be required to submit employment figures annually, but Dimitrijevic’s request would include more information. Compliance with construction contracting and hiring requirements related to the MORE ordinance (40% of work hours completed by unemployed or underemployed city residents, 25% of contracts awarded to certified small businesses enterprises) is already required to be reported to the council.

Staviski said the company would evaluate what it would need to do to comply. Earlier in the meeting he estimated that the company’s workforce was up to 15% people of color, but that it was a co-signer of the Metropolitan Milwaukee Association of Commerce’s region of choice pledge for companies to expand employee diversity.

Crump said adding requirements at the last minute would put the company in “a very tenuous position.”

“I absolutely reject that frame,” said Dimitrijevic. “I am asking for a little piece of information annually.”

“Last time we did this we had a big kerfuffle with the City Attorney [Tearman Spencer] because he didn’t think we had the authority to amend this,” said Bauman of The Couture agreement. “I just want to put that out there so there is no confusion when the headlines say ‘City Attorney Blocks Transaction.'”

Assistant City Attorney Jeremy McKenzie said he hadn’t spoken to Spencer about his position on the matter. He noted that the agreement was still in draft form.

Dimitrijevic expressed frustration that the City Attorney’s office could not provide solid advice. “I’m trying really hard to find a compromise here,” she said. “If I can’t even insert reporting requirements to a draft then I don’t even see why we are having this meeting.”

“I’m comfortable that what we’re doing is 100% legal and appropriate, we’ve done it before and I think the City Attorney’s opinion was frankly ridiculous,” said Bauman of Spencer blocking The Couture deal from being signed.

“I don’t believe there’s a problem, but again I’m not the final word at the City Attorney’s office,” said McKenzie, who was not involved in The Couture “kerfuffle.”

“Everything we are talking about is symptoms of a much larger problem,” said Ald. Milele A. Coggs. Council members want to be move involved in the agreements before they are asked to vote them up or down. “As much involvement as early as possible.”

“Today it was Milwaukee Tool, a month ago it was The Couture, tomorrow it will be something else.” She abstained from voting on the proposal. “The elephant in the room is how we are handling all of this.”

The full council is scheduled to consider the agreement on May 4th.

About the Milwaukee Tool Proposal

“Earlier this year I received a call asking to come out to visit the officials at Milwaukee Tool,” said Barrett in explaining how the deal came together. He went with Crump and said they expressed their desire for a company with Milwaukee in the name to come back to where it was founded. “We had a really good meeting.”

The company, according to testimony at an earlier Redevelopment Authority of the City of Milwaukee meeting, had 227 employees in southeast Wisconsin in 2008, but has seen that total climb to 2,600 today and a plan to reach 3,200 by the end of the year.

“It became very, very clear during the course of the conversation that their needs were imminent,” said Barrett. “They were very clear with us that they were looking at a number of communities.”

The central piece of the deal DCD negotiated calls for the fast-growing tool designer and manufacturer to bring 1,210 employees to the building at 501 W. Michigan St. by 2026 in exchange for a $12.1 million grant. It hopes to begin occupying the building in October.

“I don’t have John Gurda sitting next to me, so I can’t give you an exact historical figure, but I would wager that over the last half century this is the largest one-time infusion of jobs the city has seen,” said Barrett in a rare appearance before a council committee. “That’s the opportunity that is sitting before us right now and I don’t want us to miss that opportunity.”

Assurant Health was the last tenant in the building, vacating the space in 2016. Developer Scott Lurie purchased the property in late 2019 for $4 million and will sell it to an affiliate of Milwaukee Tool. The city would recoup the costs of its grant through a tax incremental financing district and increased property tax revenue.

The company envisions having 650 employees in the Milwaukee facility by the end of 2021. The financing agreement requires them to have at least 450 by March 2022 before a clawback provision could be invoked. The employment must grow to 1,210 employees by 2026.

A future phase could include a four-story addition to the five-story building and up to 790 more employees. The city would provide an additional $7.9 million if that comes to pass.

The company intends to relocate an entire business unit, representing a specific product line, to the building. “It’s going to be a wide gamut of different job categories,” said Staviski at a prior meeting, ticking off a list including engineering and sales positions.

The company, a division of Hong Kong-based Techtronics Industries since 2005, has recorded 22% annual growth since 2009 as its sales have reached $5 billion. Much of the growth can be attributed to the launch of a hand tools product line in 2011.

The company was founded on Milwaukee’s South Side in 1924. It moved to Brookfield in 1965 and relocated most its manufacturing to Mississippi in 1973.

Staviski said the company now has 11 manufacturing plants across the globe, including six in the United States. “That’s actually going to be eight at the end of this year,” he said, noting that new plants would open in West Bend and Greenwood, IN. An expansion is also underway at its Sun Praire plant.

The company was sold for the first time in 1975 and at least three times since. Staviski, who has been with the company since 2008, credits the Techtronics acquisition and newly installed leadership team with the recent growth.

According to a 2019 Wisconsin Economic Development Corporation release, since 2016 Milwaukee Tool has pledged to create up to 1,812 new jobs and invest $174.5 million in capital projects in exchange for up to $46 million in state tax incentives.