Urban Beets Is All About Vegan

Cool atmosphere and all-vegan fare, but food is uneven. 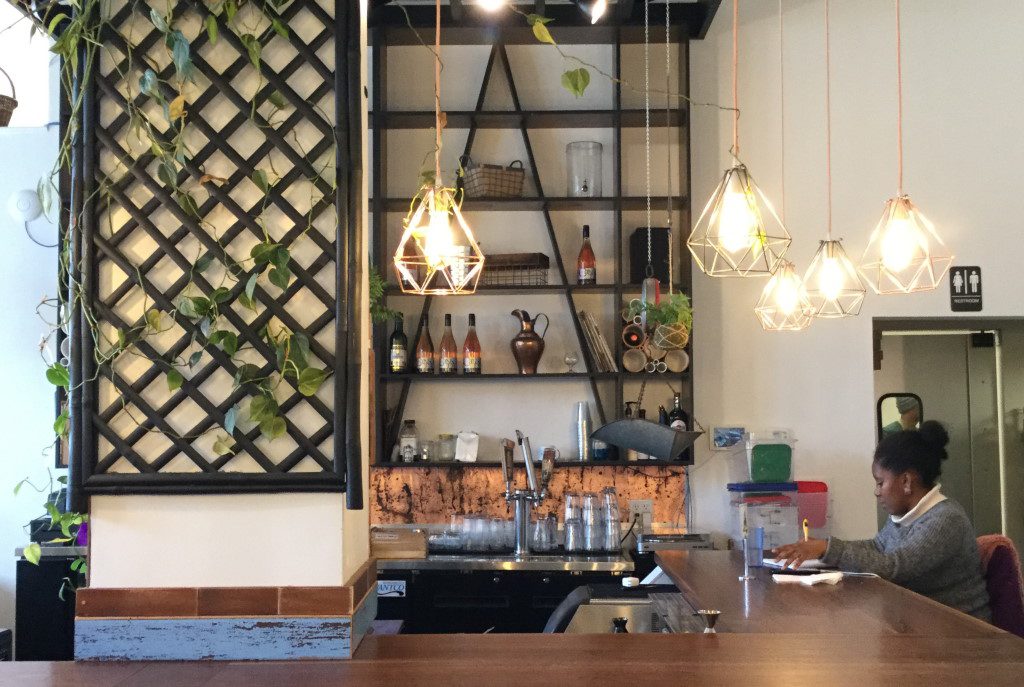 We wanted to like Urban Beets Cafe & Juicery. The restaurant with two locations, one on MLK Drive, and one in Wauwatosa, is 100 percent vegan. At two lunches in the downtown location, my companions and I dined on some memorable dishes, and a couple of duds. A caveat needs to be added here: we’re neither vegetarians nor vegans.

At first glance, you know you’re in a vegetarian restaurant when you see the wall mural with its “urban beet,” and underneath, a variety of plants with roots deep into the soil. The owners used a lot of wood in the slick contemporary décor with lattice rectangles on the wall, an attractive wooden bar, and stunningly beautiful wooden tables that showed off a variety of colors in inlaid wooden strips. It added up to a classy, very urban look.

They take your order at a counter in a small room, connected by a narrow passage to a larger room where you’ll find several tables, the bar, and the station where you gather utensils, napkins, and self-serve water.

On both visits, our meals came quickly, which suggested the food had been previously prepared, then, assembled when we ordered. We wondered: where were the salads, the colorful fresh vegetables we had hoped for, as this is a vegan/vegetarian restaurant.

The Vegetable Pot Pie promised a selection of broccoli, potato, onion, and celery, topped with puff pastry, according to the menu. Yes, it is possible to make puff pastry without butter, but if you do, it lacks the rich flavor associated with traditional French puff pastry as we soon discovered in this dish. As for the small pie, there was a barely discernible presence of sliced carrots and broccoli, and most of the vegetables had dissolved into a mushy mix.

For the Sweet Potato Melt, the chef took small cubes of sweet potato, then, layered them with provolone, spinach, house-made mayo and balsamic on whole grain bread. This mix had a good balance. The acidic balsamic rounded the flavors and redefined ordinary sweet potato. To this ultra-healthy sandwich, the chef added everyday potato chips.

Everything on the menu was marked with one or more tags of GF, SF, or NF, meaning gluten free, sugar free or nut free. Since you already know this is a plant-based restaurant, it’s useful to note this additional information.

The Shawarma bowl was a puzzle because we found no sign of anything that resembled shawarma, or shaved meat. Later, we were told the owners wanted to add something Middle Eastern to the menu, so they called it a Shawarma Bowl. The best part of the bowl, the zhoug sauce, a spicy cilantro sauce, livened the rice and the chickpeas, as both needed a flavor boost. The rest, hummus and pickled cabbage, were spicy, tasty. The bowl was NF, GF and SF.

The Mushroom Melt, which the menu describes as a tangy mix of mushrooms, onion, and provolone (made with vegetables to resemble the taste of provolone), laced with a tart horseradish sauce, hit all the right notes. Even the hoagie roll was the correct size to contain the generous portion of mushrooms. My companion would absolutely order this again.

Another dish that exceeded expectations, the Sweet Potato Chile, combined sweet potato and black beans in a sauce that was spicy but not too spicy. With the addition of coconut bacon and avocado, it was a hearty mix of textures and flavors. Like the Shawarma Bowl, it was a healthful GF, NF and SF.

I can’t report anything positive about the Free Bird, an alleged frittata, served on an English muffin. The only resemblance to a frittata was the color, gold, as if they had used farm fresh eggs to make it instead of chickpea flour. The muffin was fine; the mealy frittata almost inedible.

The Bacon Avocado Toast was delicious, perhaps because the sprouted grain bread gave it structure and made an ideal base, or because the balsamic drizzle tied it together. The coconut bacon, tiny crisp chips, tasted more like smoky coconut than bacon, but did add a counterpoint to the silky avocado. It would have been better with more than a light smear of avocado, but overall this toast was a success.

Also, on the menu, a selection of Breakfast Bowls. This is where you’ll find fresh fruit as in the Golden Glow Bowl, which includes banana, pineapple, and mango, along with turmeric spice blend, coconut and granola.

For an additional healthy kick, you can add a Superfood Hot Tonic to your meal. There are four, each made with almond or oat milk. We shared Golden Milk with four spices, turmeric, ginger, cinnamon and cardamom. It came with a lot of froth and wonderful flavor, almost chai-like from the blend of spices.

They serve Valentine Coffee, Rishi Tea, and Almond or Oat Milk, which you may improve with a variety of flavors including vanilla, peppermint and buttered toffee.

If you wish, Grubhub or DoorDash will deliver, or, you can come to this urban restaurant to enjoy a healthy meal seven days a week starting at 7:00 a.m. for early risers. Come after 4:00 p.m. and you can order pizza (cheeseburger, mushroom alfredo or buffalo cauliflower).

Urban Roots is a vegan/vegetarian café/restaurant whose food offers hits and misses, but whose atmosphere makes it another unique addition to Milwaukee’s urban dining scene. 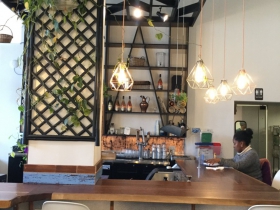 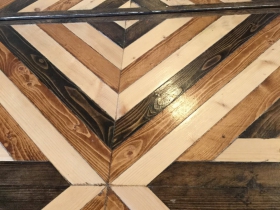 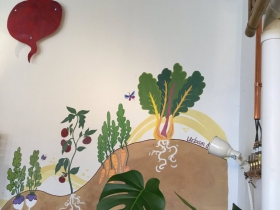 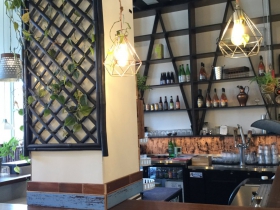 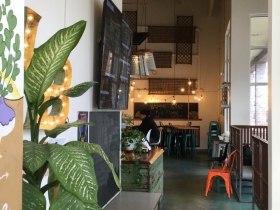 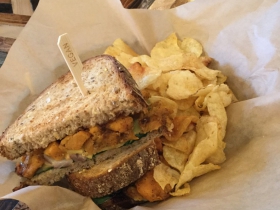 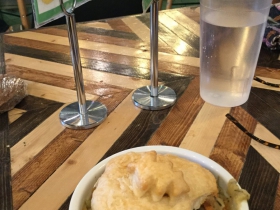 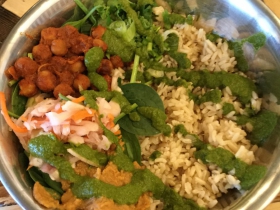 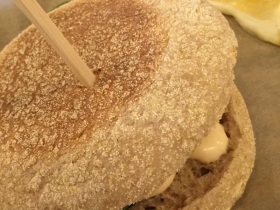 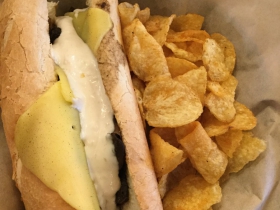