His support solid in black community. But 2020 could be different.

By Eugene Kane, Wisconsin Examiner - Sep 11th, 2019 11:24 am
Get a daily rundown of the top stories on Urban Milwaukee 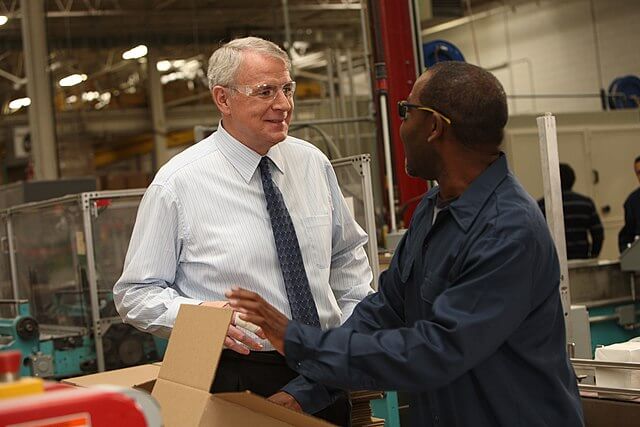 Tom Barrett campaigning for governor in 2010. Photo from Barrett for Wisconsin.

Could 2020 be the year Milwaukee finally elects a black mayor?

Mayor Tom Barrett will run for his fifth term as mayor next year. As the incumbent, he is and is the commonly accepted favorite, but changing demographics and political realities in the city could make a difference.

South Side Ald. Tony Zielinski announced his candidacy in 2017.

Across the country, including in the Midwest, black mayors are no longer a novelty. Several major cities have had more than one African-American mayor.

For Milwaukee, a city more than 40% black with a growing Hispanic population, it seems curious if not frustrating that we have not moved past the era when the mayor’s office was exclusively reserved for white men.

If Taylor or Hamilton did win, they would be not become the first African-American mayor in the city’s history.

Almost immediately, Pratt began making plans to run for the next term, and was encouraged by a primary election that placed him first among a large group of mayoral contenders including Barrett and former Sheriff David Clarke.

At the time, Pratt seemed destined to become the first elected African-American mayor of Milwaukee; I remember interviewing him several times during his stint as acting mayor and always came away with the impression he felt almost ordained to take the position.

According to his then-chief of staff Curtiss Harris, Pratt made the mistake of underestimating the impact of negative media accounts about an investigation into his campaign fundraising activities before the run-up to the general election.

Tom Barrett ended up beating Pratt by 54% to 46%, a gap which was often attributed to the questions about Pratt’s personal finances and a general failure to convince skeptical voters that he was up to the job.

Another possibility is that  Milwaukee just wasn’t ready for a black mayor in 2004.

Harris, 81, a longtime observer of politics in the African-American community, thinks one of the reasons Pratt lost was because of a concerted attack by right-wing radio hosts.

Harris said Pratt’s support was solid in the black community but the constant focus on his handling of money during his election campaign raised troubling questions.

“Black people listened to a lot of those radio shows, too,” Harris said. “Black voters started to wonder about Marvin. It was ‘How’s he going to be mayor if he can’t handle his own affairs?’

Harris said Barrett’s support in the black community has been solid through previous elections but still showed signs of vulnerability due to a generic ‘nice guy’ image that didn’t excite many voters of color.

He noted that while Barrett had done a good job of maintaining good relationships in the black community and avoiding any damaging incidents involving police abuse or policy decisions, a charismatic or outspoken African-American candidate could excite voters and challenge Barrett’s solid base of political support and his large campaign war chest.

Harris knows both Taylor and Hamilton and respects both for their accomplishments but has reservations.

He said of Taylor: “She’s very sharp” but suspects her base of support may not be as great as she assumes.

He thinks Hamilton shows great potential but says he doesn’t understand why the young African-American leader doesn’t speak out more on issues of concern to minority residents.

One thing Harris does recognize is that the future of Milwaukee’s political leadership will have to reflect the growing diversity of the population. “Whoever becomes mayor in the future, it can’t be a white person,” he said, bluntly.

Barrett will no doubt want to remain in office for the 2020 Democratic National Convention which he fought hard to bring to the city, and which will take place a few months after the spring mayoral election. In many ways, it could be an appropriate conclusion to Barrett’s career.

Barrett has been a good mayor for Milwaukee but many believe he is more interested in pleasing the downtown business community and attracting affluent (white) millennials to town than increasing opportunities for black and brown young people.

Barrett likely has built up enough good will to earn another term before riding off into the sunset. But he’s also smart enough to see that Milwaukee’s future is in the hands of minority voters.

The city has been lagging the nation when it comes to addressing issues that matter to voters of color. A national convention is exciting, but it’s a one-time event. For Milwaukee to have real change, it has to start with City Hall.