The governor lauds freshwater programs, promises state funding for them. 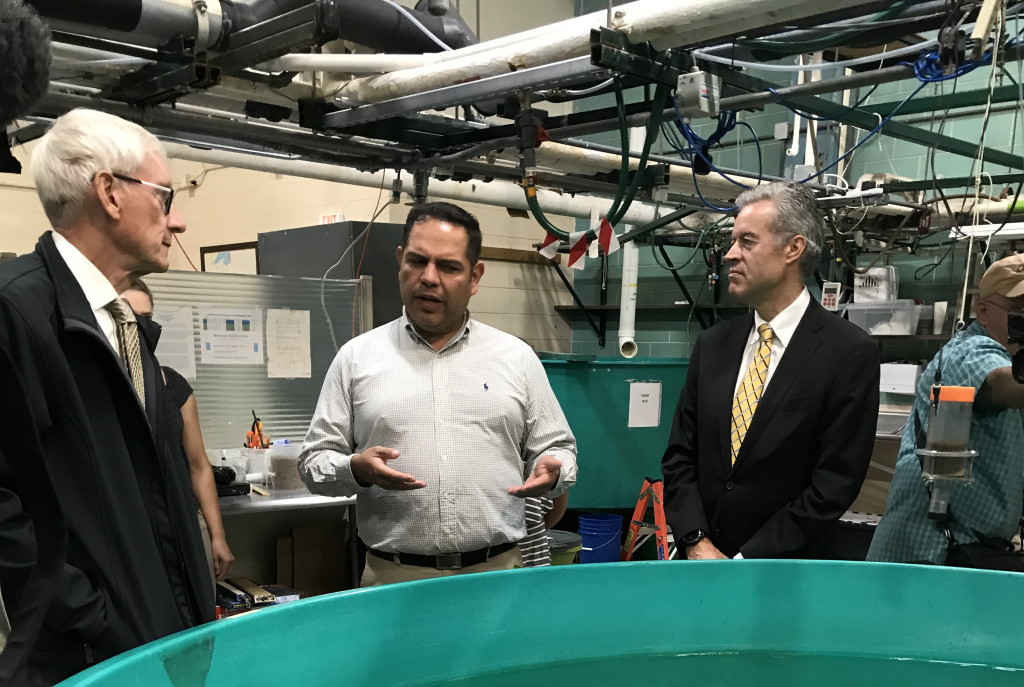 In January, Evers dubbed 2019 the “year of clean drinking water”. And this month the governor signed an executive order creating a coordinating council to address the issue of perfluoroalkyl substances that have been contaminating groundwater around the state and can be harmful to animals and people. The Journal Sentinel recently reported low levels of the substances, referred to as PFAS, are present in Milwaukee’s drinking water system.

During his visit, Evers toured several labs where he spoke with UWM researchers working on projects related to freshwater using genomics and aquaculture. And he also took a cruise around the Milwaukee Harbor on the Neeskay, the School of Freshwater Sciences research vessel.

Evers got his photograph taken discussing water quality in one of Wisconsin’s premier research facilities and UW-Milwaukee Chancellor Mark Mone got some extended face time with the governor, introducing Evers to top researchers, like Professor Sandra McLellan, who explained the importance and potential of freshwater research.

UWM, and the rest of the UW System, are attempting to launch what they’re calling the ‘Freshwater Collaborative of Wisconsin’. It’s a proposed partnership between all 13 UW System institutions taking a multidisciplinary approach to research and workforce development centered around freshwater. It has the potential to yield new research insights and create new jobs through partnerships with the private sector — something UW-Milwaukee and its freshwater program has already done with the Global Water Center. But this new program comes with an ask from the state purse: $27.6 million over six years.

Evers said that freshwater has always been an important part of Wisconsin’s heritage, noting that the area’s native tribes have long had a connection to freshwater that was cultural and even spiritual. Now, embracing that heritage, he said, “We are able to take it from that level to the concrete level of solving problems and creating jobs at the same time.”

Evers noted the aims underscored by his “year of clean drinking water” will continue well beyond 2019. What he’s already done, like the executive order, is just the beginning. And to the likely delight of UW-Milwaukee and the UW System, Evers signaled that they may get the funds they need for their freshwater collaborative. He told reporters at a press conference, “I think the expenditures and investments that we need to make will happen.”

On State Settlements and Background Checks for Firearms

In response to questions from reporters, Evers expressed disappointment over the Capitol furor after Attorney General Josh Kaul asked state legislators to sign non-disclosure agreements so they may discuss with him potential settlements in lawsuits against the state. “This all came out of the lame duck session,” Evers said.

It’s because Republicans have clamped down on “the ability of the attorney general and myself to conduct administrative business in the State of Wisconsin,” Evers said. “Well, this is how it plays out, folks. We’re in a position where everybody’s buying lawyers and hiring staff to solve a problem that should have never occurred.”

Evers also said, “Personally, and this isn’t my public policy stance, if I was a representative, I’d be very leery about signing any non-disclosure agreements.” But, he clarified, it is the lame duck law that forced the attorney general into the position of asking for them.

When asked about potentially holding a special session for gun control legislation, Evers said it was only a matter of time. It will only be a “handful of weeks”, he said, before he calls a special session seeking universal background checks for firearm purchases.