By Laurel White, Wisconsin Public Radio - Aug 15th, 2019 01:21 pm
Get a daily rundown of the top stories on Urban Milwaukee 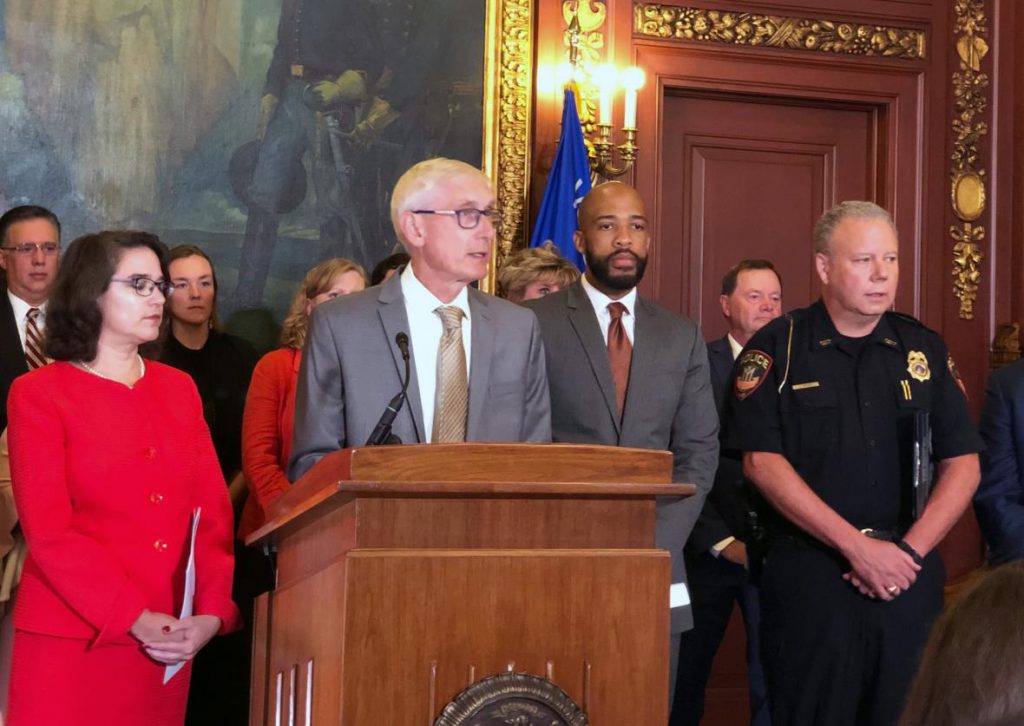 Gov. Tony Evers and Democratic lawmakers on Thursday rolled out a proposal to expand background checks on gun sales in Wisconsin.

Under the bill, which is sometimes called a “universal background check” measure, gun sales would have to be made through a federally licensed firearms dealer and involve a background check.

Flanked by the Democratic lieutenant governor, attorney general and more than a dozen lawmakers at a Capitol press conference, Evers proclaimed the plan both “reasonable” and “moderate.”

“This is an issue that should transcend political parties,” Evers said. “It’s time to stop waiting for permission from the NRA. Enough is enough, folks.”

The governor accused lawmakers of dragging their feet on the issue.

“Those in power have failed to do much more than say, ‘Jeez, we’re sorry,'” he said.

According to a March 2018 Marquette University Law School poll, 81 percent of Wisconsin residents support background checks for gun purchases online and at gun shows. Polling wasn’t conducted by the group on other specific gun-related proposals, though a broad question about the efficacy of gun control measures found 43 percent of respondents thought the laws wouldn’t deter mass shootings.

The bill unveiled Thursday includes some exceptions for background checks on gun sales, including gifts or inheritances between family members and any firearm classified as an antique.

Speaking at the press conference, Johnson became emotional as she held aloft pictures of Milwaukee children killed by gun violence.

“I will never forget the sounds that family made when that casket closed,” Johnson said, recounting attending a funeral for Sierra Guyton, a 10-year-old girl killed by gunfire at a Milwaukee playground in 2014.

Middleton Police Chief Charles Foulke also spoke in support of the plan. Foulke oversaw the response to a mass shooting incident at a Middleton software company in 2018.

Foulke said the shooter in that incident obtained his gun without passing a background check.

“This proposal requiring background checks on every firearm is common sense,” Foulke said. “I would not wish that day or the follow up on anyone.”

The governor has been a champion of universal background checks and a so-called “red flag” law in Wisconsin in the wake of mass shootings in Ohio and Texas earlier this month.

Several states enacted such laws, also known as extreme risk protective orders, in the wake of the deadly attack at Marjory Stoneman Douglas High School in Parkland, Florida, in 2018. A number of reports following that shooting highlighted warning signs exhibited by the shooter.

Under such laws, law enforcement notified by family or friends can petition a judge to temporarily revoke someone’s right to buy, own or carry weapons.

Evers has said he has considered calling a special session of the state Legislature to take up the proposals. The governor said Thursday that is still an option he is considering.

The plan for expanded background checks faces an uphill battle in the Republican-controlled state Legislature, where the GOP holds a 63-36 majority in the Assembly and 19-14 majority in the Senate.

Earlier in the week, leaders of the Assembly and Senate raised specific concerns with the universal background check bill. They argue it impedes Second Amendment rights by requiring buyers to register their weapon with the government after the sale.

They have also expressed concerns that the red flag law would violate due process rights.

“With the release of his proposed legislation today, Gov. Evers is giving the people of Wisconsin the impression that somehow, expanded background checks would have a dramatic impact on gun violence here in Wisconsin,” Steineke said. “Simply put, it is disingenuous to suggest that requiring background checks on private sales would have prevented the tragedies we’ve seen as a state and nation.”

Steineke said Republicans remain committed to “providing and expanding mental health resources to those in need – which has time and again been a root cause of many of these shootings.”

Evers called on all lawmakers to take public positions on the bills. He said Republicans who choose not to support them “do it at their own risk at the polls.”