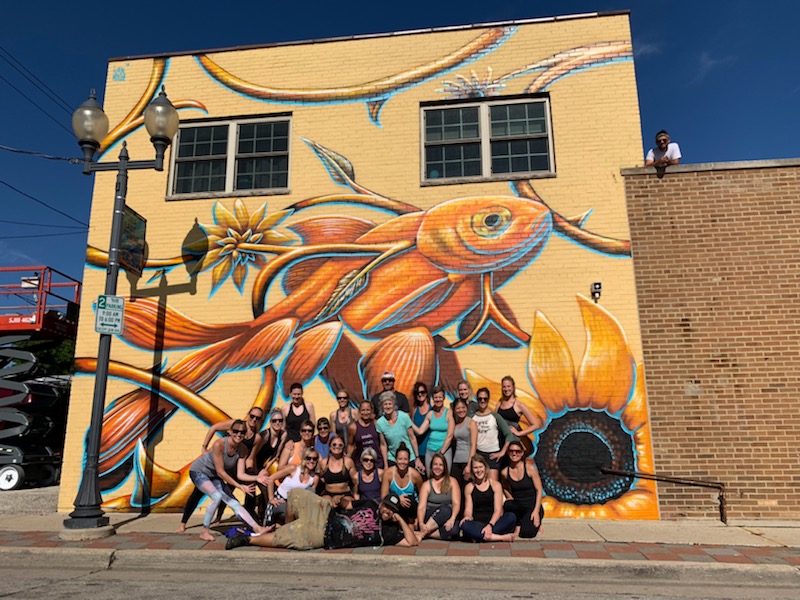 Recently, the city of Wauwatosa has gotten a lot more colorful. In late July, seven artists painted large-scale murals on the sides of North Avenue buildings, giving the area an extra boost of vibrant energy. From 3D geometric shapes, a mischievous raccoon, and a goldfish and sunflower, the six murals bring even more life to bustling businesses that line the east Tosa street.

Wauwatosa District 5 alderman Joel Tilleson said the mural project is three years in the making, although outdoor art is not a new thing for the city. Several years ago, the Wauwatosa Tourism Commission began “an annual series of rotating sculptures in Hart Park.” 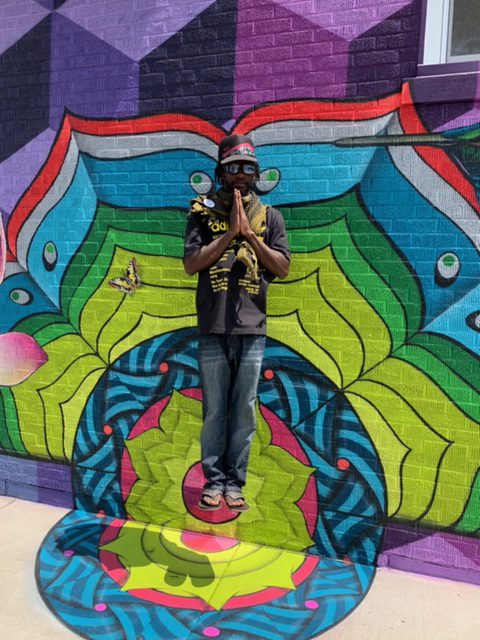 “The city has been considering public art options for some time,” Tilleson noted. The alderman researched mural projects in other cities, including Denver, Detroit and Buffalo, and concluded it was time for east Tosa to have its turn.

“I wanted to know what role our city government could play in working with private building owners and the arts community to create a large public-private partnership of a similar scale,” Tilleson said.

Early last year, Tilleson contacted Stacey Williams-Ng, director of the consulting agency Wallpapered City, for advice on how to move forward with the mural project. After Williams-Ng presented her ideas to the Wauwatosa Community Affairs Commission, the city’s Tourism Committee agreed to expand the city’s public arts program. Wallpapered City was chosen by the city to oversee the mural project. The consulting firm’s other projects include Black Cat Alley, a series of murals in an alleyway on Milwaukee’s East Side.

Wauwatosa put out a public call for artists in April, and, in late June, six artists out of several hundred, including some international applicants, were selected for the east Tosa mural project. Their names and works are as follows:

Tilleson said that response to the mural project has been very positive among Wauwatosa residents. The city hopes to install more murals in the future, although the Wauwatosa council may need to revisit city ordinances regarding outdoor design.

“It’s exciting to see Wauwatosa’s government and tourism entities embrace public art as they have over these past few years. The success of this inaugural program hopefully ensures that we will see it again,” he added.

Seven featured artists have been named for Mount Mary University’s 2019 Starving Artists’ Show, which will be held on the campus grounds 10 a.m. to 5 p.m. September 8. Featured artists Kim Wilson, Mary Boettcher, Jean Wells, Ilze Heider, Phyllis Bankier, Robinson Scott and Jackie Guttuso work with diverse media including glasswork, pottery, jewelry and painting. Admission to the show, which is sponsored by the Mount Mary Alumnae Association, is $10. Proceeds from the Starving Artists show will be used to fund student scholarships. Visit www.mtmary.edu/sas for more information.

-At 1:30 p.m. Tuesday, the Milwaukee Art Museum (MAM) will present a gallery talk with Nikki Otten, associate curator of prints and drawings, on the museum exhibit “Petite Posters: Jules Cheret and Le Courrier francais.” The exhibit will be on display at the museum through November 17.

-At 1:30 p.m. Saturday and Sunday, the museum will present the Nares: Moves film series, all 10 of artist Jamie Nares’ short films. The films will be shown in conjunction with the Nares: Moves exhibit on display through October 6 in the Baker/Rowland Galleries.

-Featuring the work of more than 120 artists in glass, leather and metalwork, photography, fiber art, digital art and mixed media, the Morning Glory Art Fair will return to Milwaukee Saturday and Sunday for its 45th year, this time in a new location—Fiserv Plaza, 1111 Vel R. Philips Ave. New this year, Morning Glory will showcase 2D art like painting and watercolors.

– “Under One Moon,” an outdoor festival commemorating the 50th anniversary of the Apollo 11 moon landing, will take place Friday through Sunday in the Third Ward’s Catalano Square, 147 N. Broadway. Featuring lunar-themed activities such as readings by Wisconsin poets, live musical entertainment and dance performances, and a talk by NASA astronaut Wendy Lawrence, the festival’s highlight will be British artist Luke Jerram’s 23-foot inflatable exhibit “Museum of the Moon,” which will rise above the city. The celestial exhibit includes NASA photography.