About Those Missing Streetcar Bike Lanes 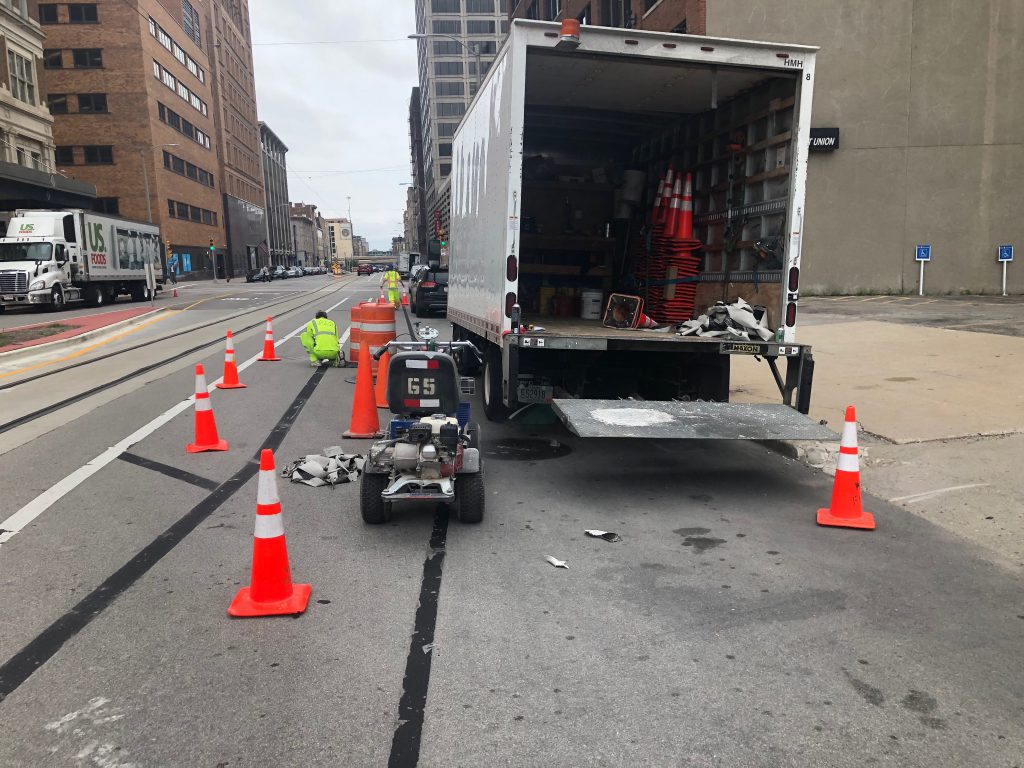 The construction of The Hop was supposed to bring with it an enhanced network of bicycle lanes for downtown cyclists as part of street redesigns for N. Milwaukee St. and N. Broadway.

And for a brief period, it did.

As part of the construction of the southbound tracks on N. Broadway and repaving of the street, contractors removed a lane of traffic and added a buffered, southbound bike lane in 2018.

A similar treatment was planned for N. Milwaukee St., with the three-lane street being converted to two vehicle lanes and a northbound bike lane. But that lane was never installed.

By August 2018, the city had contractors out removing the plastic striping that formed the bike lane and reinstalling the traffic lane. The promised north-south bicycle network connection through East Town was not to be, it seems, but why?

“After evaluating and considering future bike network connectivity, streetcar performance, curbside use demands, and motor vehicle traffic volumes and patterns, it was determined that the available space for bike lanes on Milwaukee and Broadway was not enough to provide continuously protected bike lanes – or low-stress, high-quality bike lanes that accommodate people of all ages and abilities, make bicycling safer, and attract more people to bicycling,” said Department of Public Works (DPW) Commissioner Jeff Polenske via email in June 2018.

“DPW is committed to installing a parallel north/south bike corridor that accommodates people of all ages and abilities in advance of the streetcar opening in late 2018,” added Polenske. The targeted street was N. Jefferson St.

But that bi-directional lane, envisioned as a protected bike lane that runs from E. Kilbourn Ave. to the pedestrian tunnel under Interstate 794, has yet to move forward. DPW officials held a public walk of the route in June and continue to work on design of the lane, eight months after the streetcar began operating. 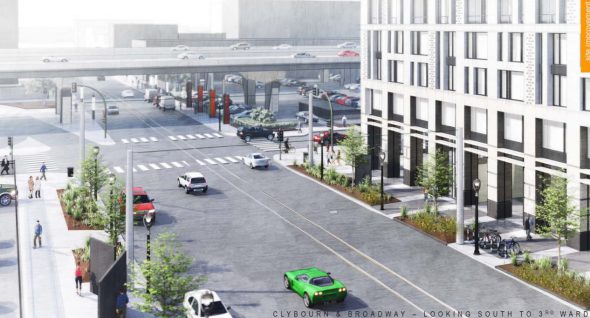 Meanwhile, the Common Council and Redevelopment Authority of the City of Milwaukee (RACM) board just completed their review of a $3.8 million allocation to streetscaping and other public infrastructure improvements on N. Broadway between E. Michigan St. and E. St. Paul Ave. The allocation does not include any funding for cycling infrastructure despite the fact that all modes of transportation, including biking, are are required to be accommodated by the Complete Streets policy adopted by the city in late 2018.

At RACM’s July 18th hearing, cyclist Mitchell Henke asked why cycling provisions weren’t included in the funding allocation, something that got board members asking questions.

“How do you go south on a bike right now?” asked RACM board member Bill Schwartz. “That’s a great question. There is no southbound bike lane through Downtown and that’s a problem we need to figure out,” said Department of City Development economic development specialist Dan Casanova.

“It seems from the picture there will be plenty of room for a bike lane,” said board member Kathryn West, referring to a rendering released by the city of the plan to connect the Third Ward and Downtown.

“Agreed,” said Casanova. He told the board that DPW was working on the Jefferson Street plan.

“Can we make that a priority though?” asked Schwartz. 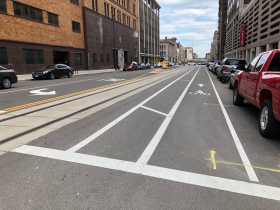 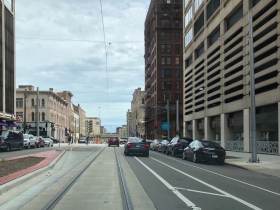 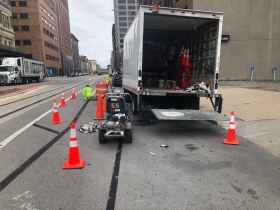 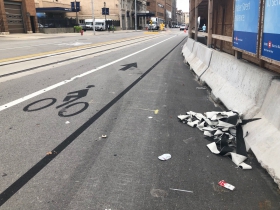 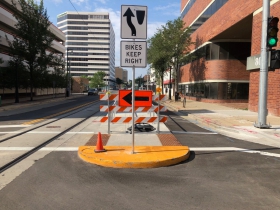 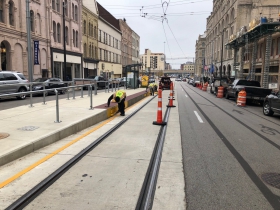 While a north-south cycling connection remains missing in action, new protected lanes on E. Kilbourn Ave. running from N. Water St. to N. Jackson St.. have had issues with drivers misunderstanding the design and others crashing into barriers.

The protection is formed by placing the bicycle lane along the curb and the parking lane next to the travel lane, effectively reversing the normal arrangement. The idea is to use the cars as a barrier, with cyclists angling back to the normal position at intersections so they’re visible to drivers.

As part of the installation, the city installed white, plastic sticks to shield the bike lane. But similar to what has happened on the North Avenue and Locust Street bridges, drivers repeatedly hit the plastic barrier and the city removed it. Now drivers routinely park in the bike lane, oftentimes on top of a painted outline of a cyclist.

A DPW representative told Urban Milwaukee in March that the department was considering other barrier options to protect the lane, but no change has been made. Orange construction barrels remain in select locations.

The department now has even more lane miles to consider how to protect. The Kilbourn Avenue bike lanes were just expanded as part of a high-impact paving project of W. Kilbourn Ave. from N. 6th St. to the Milwaukee River. 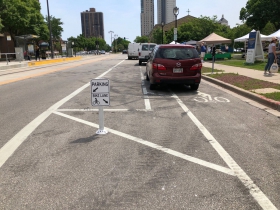 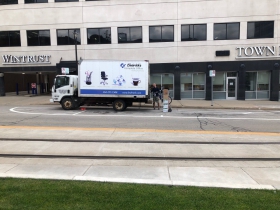 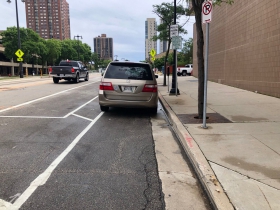 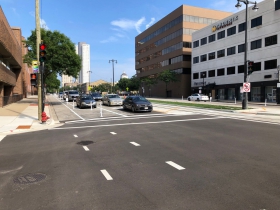 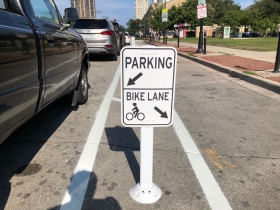 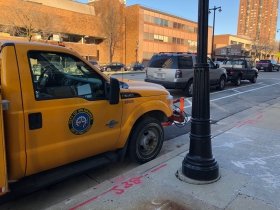 One thought on “Transportation: About Those Missing Streetcar Bike Lanes”