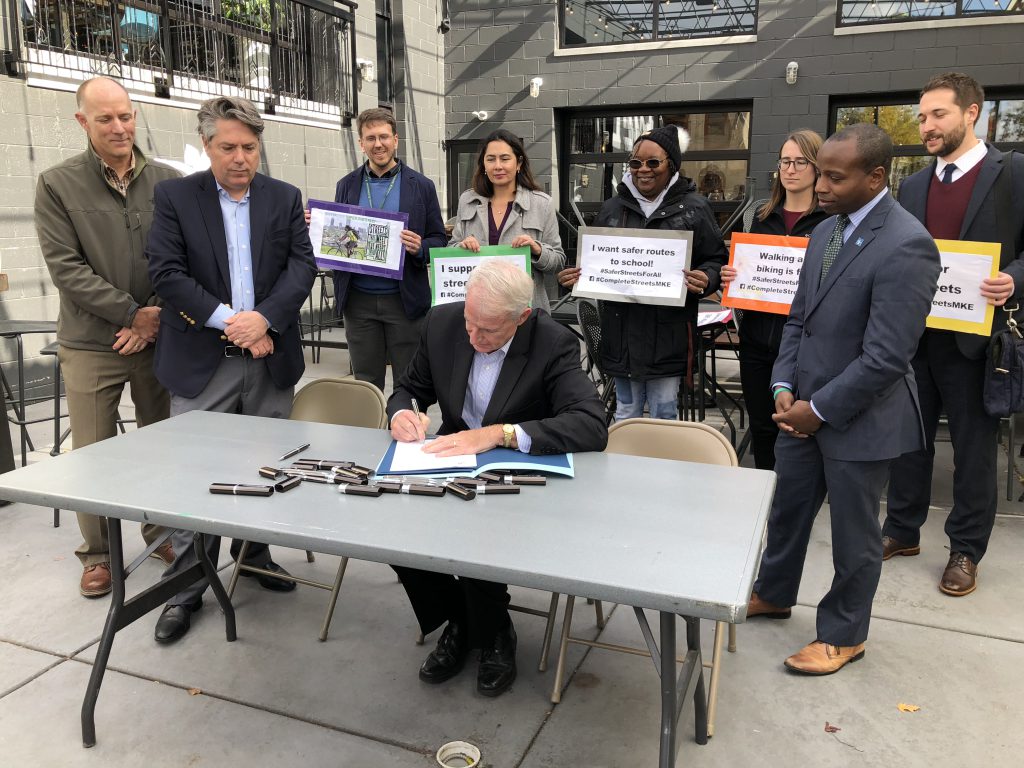 “We are here to celebrate a new era of transportation and urban space in Milwaukee,” said Barrett. The legislation is intended to make streets a safe place for those of all ages and abilities.

“People want safe and vibrant streets. People want choices… Too often our streets are difficult to cross and have speeding vehicles,” said the mayor.

Barrett praised the efforts of the Complete Streets Coalition. The group, led by Jessica Wineberg and Caressa Givens of the Bicycle Federation of Wisconsin, collected over 700 signatures in favor of the policy and received backing from a host of organizations including the American Heart Association, Bublr Bikes, Northwest Side Community Development Corporation and the Sixteenth Street Community Health Centers. “This is really just the beginning. There is more work to be done, so don’t go away,” said the mayor as he handed out the 10 pens used to sign the legislation.

Barrett characterized the policy as good for business and for residents. His remarks were backed up by Henry Schwartz of MobCraft Brewing. Schwartz, in response to a dramatic rebuilding of S. 5th St., said: “It really has made a significant difference to our business.” The brewer said the rebuilding was a “pleasant surprise,” and said the construction was worth the wait.

The ceremony was held on Fuel Cafe‘s patio along S. 5th Street, just outside of the offices of The Kubala Washatko Architects UrbanLab. “The street we are on, 5th Street, is a perfect example of what we hope to see more of in the future,” said City Engineer Jeff Polenske. The 5th Street example, profiled in a September article, includes a narrowed roadway, wider sidewalks and a lot of new businesses.

The city, which as part of the legislation established a committee to deal with street design decisions, will now have to actually put the policy into effect. “Sometimes we’re going to have to make a tough decision where we’re going to have to lose some productivity or travel time. That’s a fight we should be prepared to win,” said Alderman Nik Kovac when the policy was before the Public Works Committee.

At the same committee meeting, Ald. Michael Murphy expressed concern about the city’s own design engineers. The attitude of some, he suggested, is “I have a traffic manual handbook that was printed by God. I have to follow that handbook because it’s what’s in the handbook.”

The ordinance passed the council unanimously earlier this month.

The policy comes as a response to the 2015 repeal of the state’s Complete Streets policy. Wisconsin was one of the first states to adopt such a policy, but Governor Scott Walker‘s 2015 budget eliminated the policy as a cost-saving measure.