Attitudes of the two parties seem to be flip-flopping on this issue.

Steel from Europe being unloaded at Port Milwaukee, May 2015. Photo by Peter Hirthe.

Traditionally, the Republican Party claimed to be the free market party. This includes the global free market, where goods and services can move across national borders with few restrictions.

Among professional economists, there is near universal agreement about the benefits of the global free market, both to consumers who expand their purchasing power and producers who enjoy a larger market for their products. Every few weeks, the IGM Forum at the University of Chicago Booth School of management surveys a panel of economists at research universities on an issue in economics. Although they differ on many issues, there is no disagreement on the views of economists on the benefits of free trade.

For example, an October 2016 survey asked whether “adding new or higher import duties on products such as air conditioners, cars, and cookies — to encourage producers to make them in the US — would be a good idea.” The panel included members who advised Democratic administrations and others who served Republican ones. Yet, on this question they were united, all either disagreeing or strongly disagreeing with the policy. 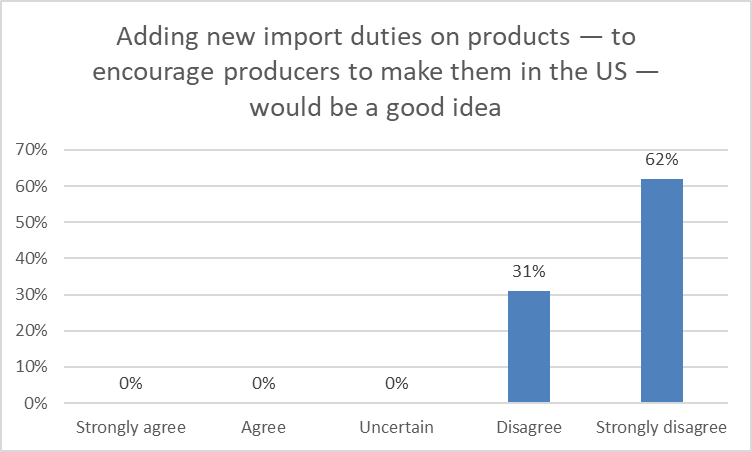 In March 2018 the panel was asked to respond to this: “because global supply chains are more important now, import tariffs are likely substantially more costly than they would have been 25 years ago.” Here again they were united on the importance of trade and opposition to tariffs. 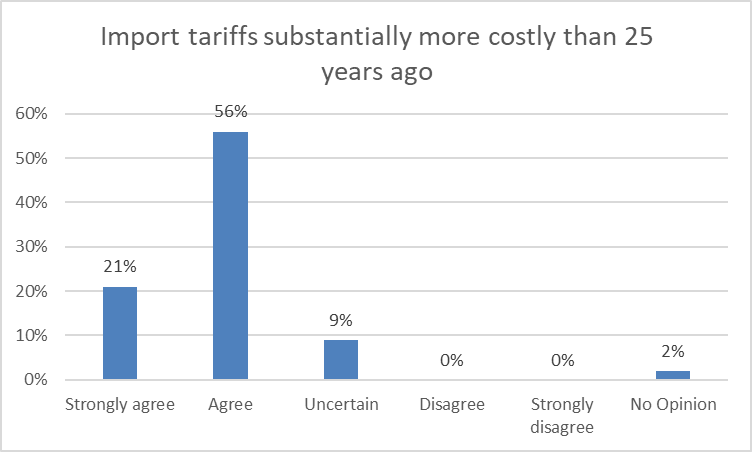 The same month, IGM asked about tariffs on imported steel and aluminum. As the chart below shows, these tariffs had no supporters among the economists. Economists consider such tariffs as particularly ill-advised because both steel and aluminum are Intermediate goods, used by American firms to manufacture other goods, such as motorcycles and small engines. Thus, they raise the cost of other American products. 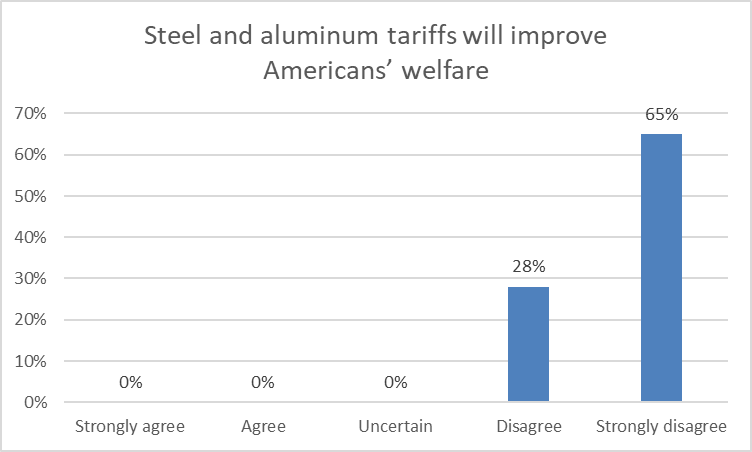 President Trump’s tariffs appear to be designed with the 2020 election in mind: they aim to protect industries in counties that were up for grabs in the 2016 election, that he either won narrowly won or narrowly lost. The tariffs on steel and aluminum fit this mold.

In a 2018 article, Ronald Brownstein argued that Democratic regions stood to be the big losers from tariffs:

in fact, the party is now centered in the major metropolitan areas that are integrated into global markets and at the forefront of the transition into the information-age, digital economy. The most telling measure of that shift: while Hillary Clinton won fewer than one-sixth of America’s counties in 2016, her counties accounted for nearly 60% of all US exports, according to calculations by the Metropolitan Policy Program at the center-left Brookings Institution.

However, particularly because of retaliation tariffs from US trading partners (mostly from China), the big losers from the Trump tariff regime seem to be areas that voted for Trump. In a analysis of retaliation tariffs, the Brookings Institution used its county database to calculate the share of each county’s exports, its direct export-supported jobs, and share of total export-supported jobs affected by these tariffs.

The next chart shows averages for total jobs threatened by the tariffs for groups of counties: those in the 100 largest metropolitan areas, the next largest metros, the smallest (“micropolitan”) areas and rural areas. The less urban the area, the greater the impact of the retaliatory tariffs. Ironically these were where support for Trump was strongest. 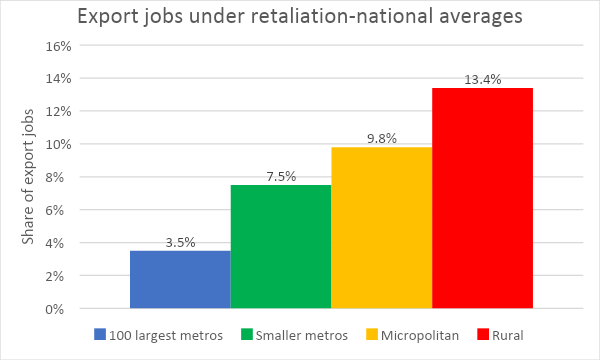 Wisconsin counties showed the same pattern: the less urban an area, the harder it was hit. Wisconsin itself came in as the tenth most impacted by the tariffs; the nine states hit harder had all supported Trump. The next chart shows the individual Wisconsin metros. While Madison and Milwaukee fared better than other locations in the state, at about six to seven percent of jobs affected, they still did worse than the average for the top 100 metro areas (in the above graph) at four percent. 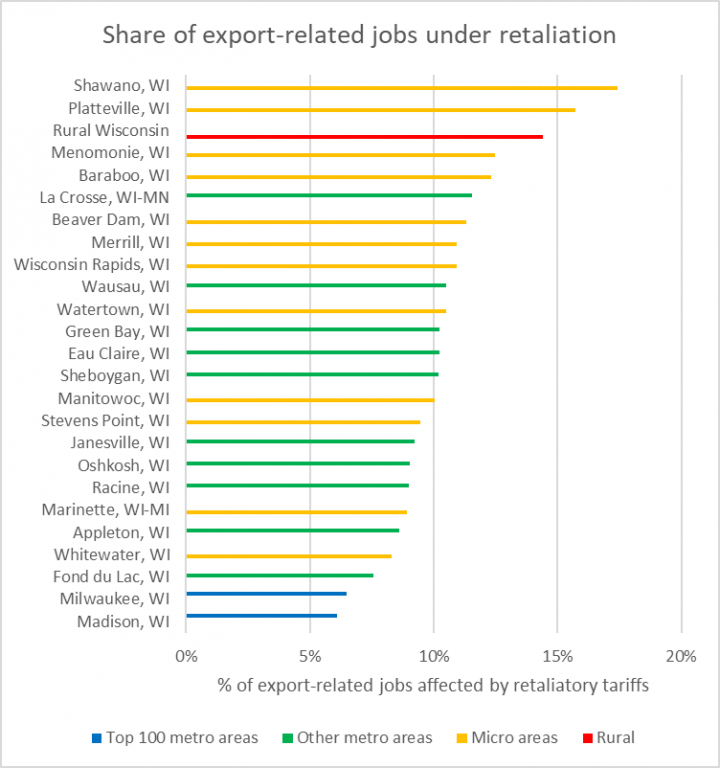 As the next graph shows, both Democrats and Republicans had been about equally positive and wary about globalization, based on surveys from the Chicago Council on World Affairs. But in recent years there began to be a shift with Democrats becoming more globally oriented and Republicans feeling more threatened by the changes. While some of this shift may result from Trump’s attacks of trade agreements and immigration, the gap seems to have started earlier, in reaction to the Great Recession. Thus, it may be that Trump sensed the shift in perspective among Republicans and has taken advantage of it. 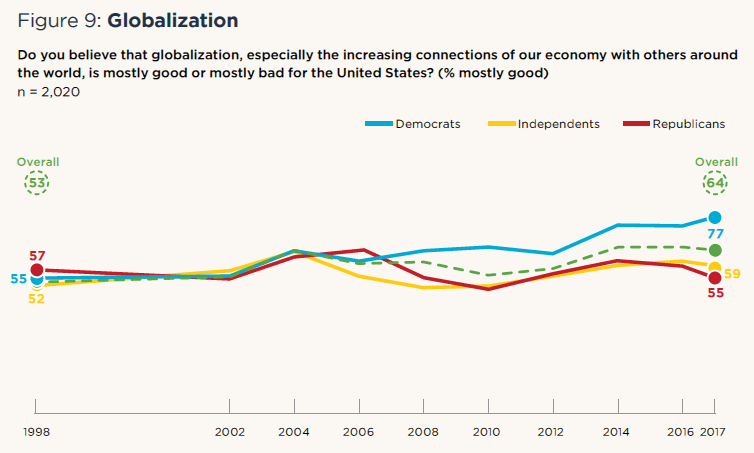 Marquette Law School poll also assessed Wisconsin attitudes on tariffs. In the run-up to the 2018 midterm election it asked: “Do you think raising tariffs on steel and aluminum imports to the US will help the US economy or hurt the US economy?” The following chart shows net support–the difference between the percentage answering that the tariffs help the economy and the percentage saying they hurt. Democrats were consistently negative; Republicans grew increasingly positive. 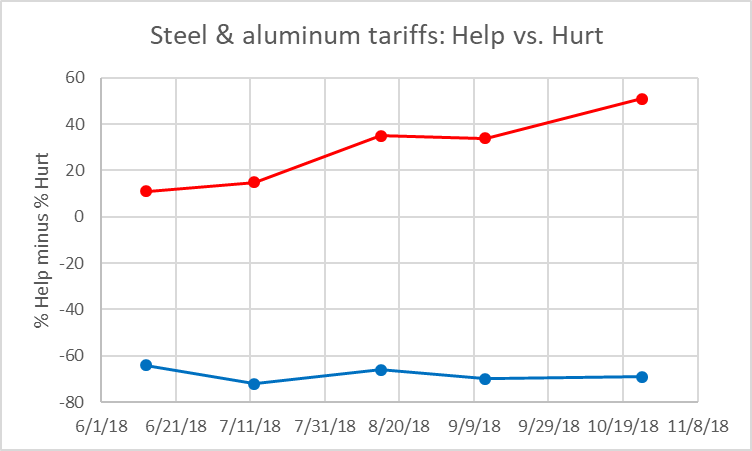 A more general question was asked periodically starting in 2016: “Thinking about free trade agreements. . . In general, do you think that free trade agreements between the US and other countries have been a good thing or a bad thing for the United States?” Democrats grew more positive over this time. More surprisingly, so did Republicans despite Trump’s bad-mouthing of such agreements. Perhaps they were thinking of the agreements that might come out of the Trump administration. 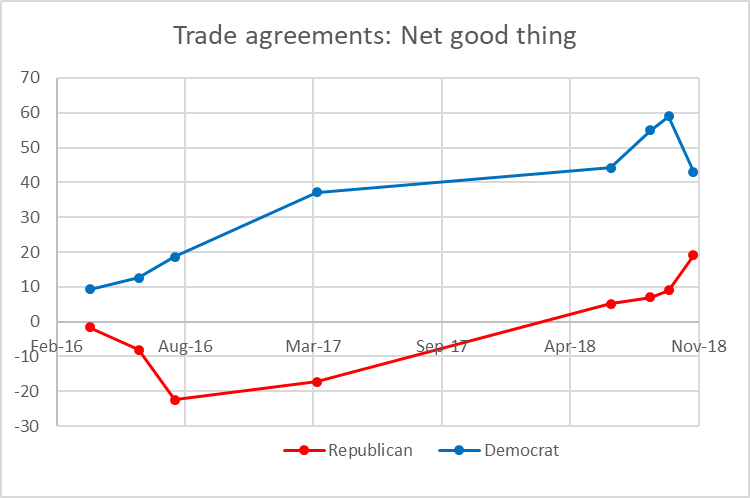 One question is how permanent the trend is. How much is due to attitudes towards Trump, with Democrats reacting to Trump’s attack on trade by embracing globalism? Brownstein argues that there is a genuine shift going on:

Republicans have become the party of blue-collar, older and non-metro white America, where suspicion of trade is just one strand in an insular nationalism that also includes skepticism about international military alliances and immigration. … Democrats now rely on a preponderantly urban-based coalition of minorities, millennials and white-collar whites largely receptive to global engagement in all of its forms.

It is particularly ironic, then, that the Trump tariff wars seem most primed to hurt the economic future of the regions, in Wisconsin and nationally, that most enthusiastically embraced him.