Wisconsin’s family dairies are increasingly threatened. In part, this crisis stems from public policies decisions by two administrations: the Scott Walker administration in Wisconsin and the Donald Trump administration of the United States.

These policy decisions were made in the context of long-term shrinkage in US agriculture employment. At the time of the American Revolution, 90 percent of Americans were farmers — it took nine farmers to feed one town dweller. Today less than 2 percent of the American population is directly employed in agriculture.

Long term dairy farm employment has suffered a double whammy. Like most agriculture, technology advances allow more production with fewer people. In addition, demand for milk has experienced a long-term decline, as shown in the next graph, based on data from the US Department of Agriculture. Since 1975, milk consumption per person has declined by 40 percent 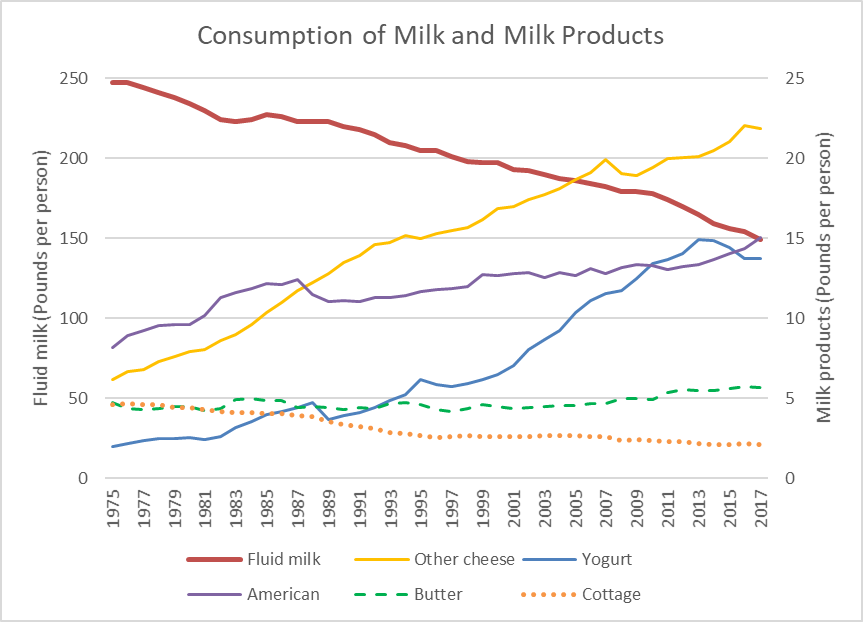 Consumption of Milk and Milk Products

Given declining demand for milk, one might expect that the last thing state government would decide to do is encourage more milk production. Yet, on March 13, 2012, Governor Scott Walker announced a new program called Grow Wisconsin Dairy 30×20. His accompanying news release explained the name came from the intention to “achieve an annual milk production of 30 billion pounds by 2020.” The release went on to say, “The goal of the Grow Wisconsin Dairy 30×20 program is to improve the long-term viability of Wisconsin’s dairy industry through services … to meet the growing demand of the marketplace.”

As the next chart shows, Grow Wisconsin Dairy 30×20 quickly achieved its goal. Rather than waiting until 2020, Wisconsin milk production passed 30 billion pounds in 2016. This belief that increased milk production was a good thing may also have also encouraged the Wisconsin Department of Natural Resources to overlook the impact of large dairy operations (call CAFOs) on the increase in ground water pollution. 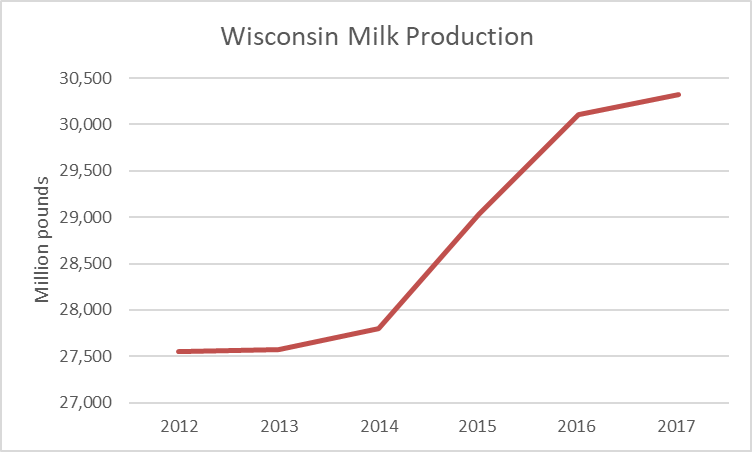 The Walker administration’s enthusiasm for increased milk production is puzzling. Basic economic theory predicts that increasing supply, without increasing demand, would lead to lower prices. This is visualized in the supply-demand below. Increased supply shifts the equilibrium from point A to B, lowering the price. 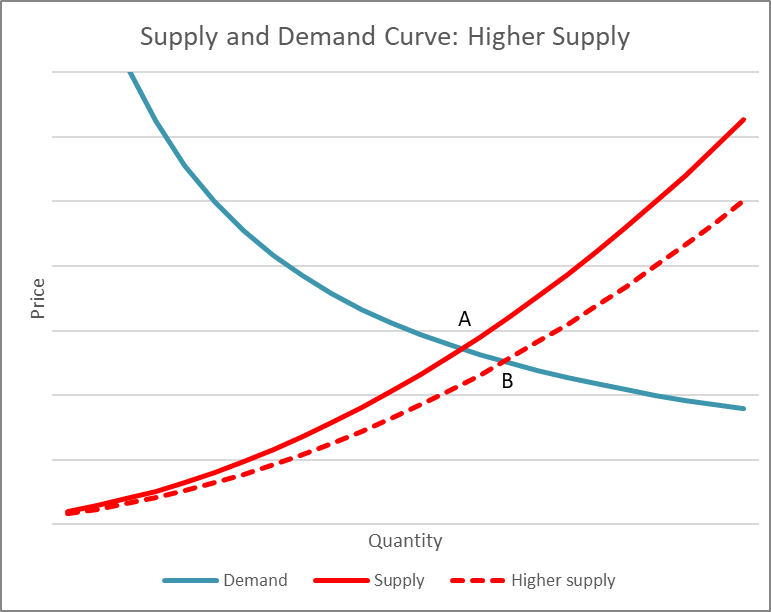 This odd misdiagnosis is reflected in a 2012 op ed by Ben Brancel, at that time Wisconsin’s secretary of agriculture:

Production grew less than 1 percent in 2011 to 26.1 billion pounds. Good, but not good enough to keep us on pace to meet the demands of the state’s growing processing industry and customers around the world. Wisconsin dairy farmers produce approximately 90 percent of the milk volume needed by the state’s dairy processors. We need it to be 100 percent.

This suggests that Walker and his administration were influenced less by farmers than by “the state’s growing processing industry.” Unfortunately, the demand for milk did not grow along with increased production.

A second blow to dairy farmers came more recently as the result of President Trump’s tariff war against America’s trading partners. This war was triggered by the Trump administration’s series of tariffs on imports of certain products from America’s trading partners. Several countries responded by imposing retaliatory tariffs on selected American products, including agricultural.

A recently released study — by four economists from the University of California at Los Angeles, Yale University, the University of California at Berkeley and Columbia University — includes a comparison of American counties impacted by the tariffs to the 2016 election results. Their findings are summarized in the study’s graph which I have reproduced below. The horizontal axis shows the 2016 presidential vote with the Republican share increasing to the right. The left and right vertical scales show the average percentage increase in average cost of living due to the tariffs.

The solid line shows the average economic impact of the Trump tariffs on imports, the tariffs aimed at protecting American manufacturers by raising the cost of their foreign competitors. These tariffs had the greatest effect on enterprises located in counties that were highly competitive in the 2016 election. By contrast, import tariffs “dropped off particularly precipitously as the Republican vote share increased.” 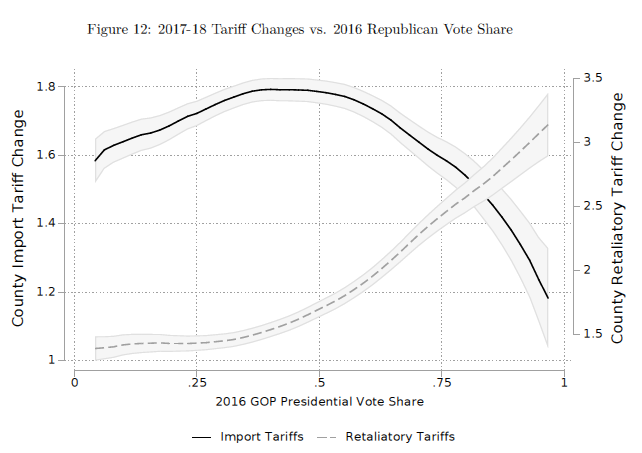 The dashed line in Figure 12 plots the impact of retaliatory tariffs imposed by US trading partners versus the 2016 presidential vote. These countries strategically targeted exports originating in counties that had supported Trump. The authors conclude that counties that lean Democratic suffered little and even experienced relative gains while “very Republican counties bore the brunt of the costs of trade war, in part because retaliations disproportionately targeted agricultural sectors, and in part because U.S. tariffs raised the costs of inputs used by these counties.” As for the impact of U.S. tariffs, as the U-shaped line on the graph shows, “counties with a 40-60% Republican vote share received more protection than heavily Republican or Democratic counties.” In short, while U.S. tariffs tended to protect politically competitive counties, America’s trading partners “retaliated by targeting exports in sectors concentrated in heavily Republican counties,” so the brunt of the loss was felt by Trump voters.

That strategy should surprise no one. Had the retaliatory tariffs hit liberal areas, Trump’s response would likely have been on the lines of they got their just desserts for rejecting him.

The combined impact of the Walker and Trump policies has been disastrous.

Wisconsin without its family dairy farms would be like Colorado without the Rockies. In working to save these small businesses, a start is to make sure that those who purport to speak for family dairy farms are themselves family dairy farmers and not located somewhere else in the dairy supply chain. Strict enforcement of rules and regulations—whether environmental or standards for organic labelling can have a positive economic effect. Finally, a serious examination of Canada’s supply management system and whether it could bring stability to Wisconsin should be undertaken.

Wisconsin’s dairy farmers deserved better from their elected officials. Hopefully, with a new administration, dairy cows grazing in Wisconsin fields will not become a rare sight.