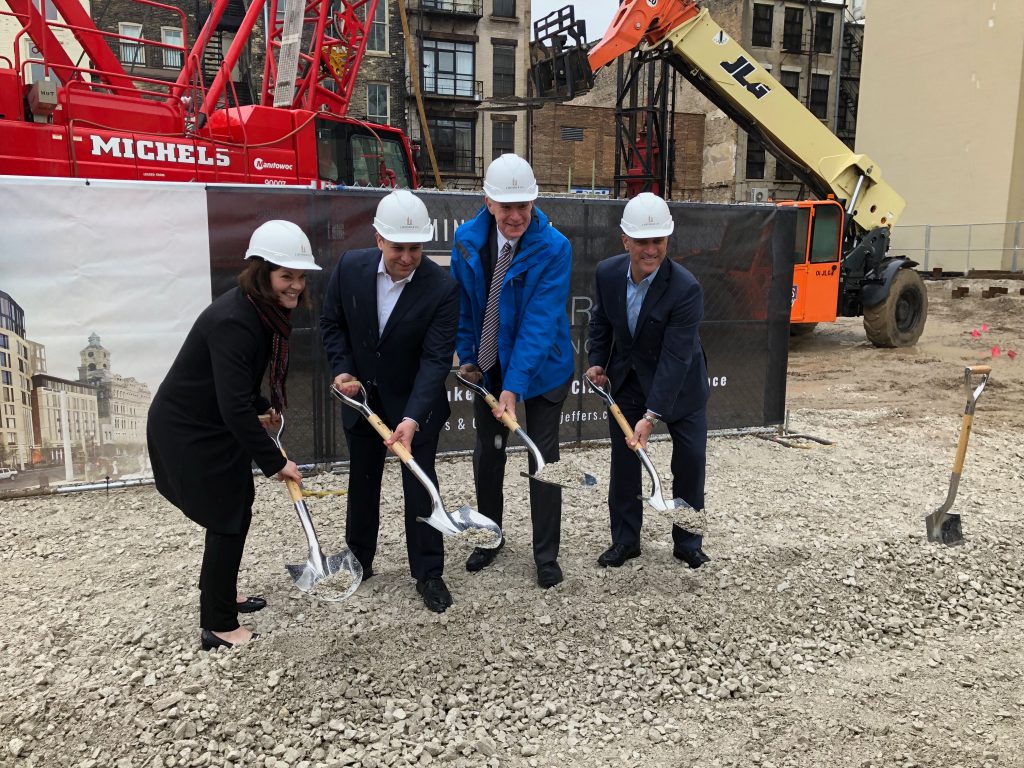 A seemingly never-ending week of rain storms wasn’t enough to postpone the groundbreaking of the Huron Building in downtown Milwaukee.

“Getting to this point actually took some time for us. We actually started the process over two years ago,” said Enea. The firm will relocate its 180 area employees to the $60 million project. Its office space will be built with a variety of “me” and “we” spaces, intended to balance the need for private offices with a growing push for spaces for collaboration in modern office layouts. The firm, headquartered in Kansas City, believes the office design will be an asset in its future recruitment efforts.

The firm, which has approximately 100 attorneys and paralegals in Milwaukee, was formed by the 2016 merger of Husch Blackwell and Whyte, Hirschboeck Dudek. The latter has been located at Cathedral Place for 15 years, which is the agreed length for the merged firm’s lease with J. Jeffers & Co. Its lease was brokered by Colliers.

The building will rise from what is currently a 7,200-square-foot surface parking lot at the northwest corner of N. Broadway and W. Clybourn St. The name, suggested by a Husch Blackwell employee, is a reference to Clybourn’s prior name as Huron St. The building contains 153,000 square feet of office space, 8,500 square feet of first floor commercial space and five levels of parking.

Jeffers, who has a number of projects now active in Downtown, drew high praise from Barrett during the ceremony. “When I see something that Josh is involved in, our attitude is ‘we don’t have to be worried about that.'” Barrett, who noted Jeffers has earned the reputation through hard work, said the developer joins a short list of his peers that propose projects that consistently go smoothly.

His reputation, or at least a very good pro forma statement, also helped the developer raised $14 million from more than 400 investors for this project, including $10 million in the first 80 minutes, on crowdfunding platform CrowdStreet. The project relies on $21 million in equity. Associated Bank is serving as the primary lender.

The construction comes after a four-year design process that included the project going from a conceptual plan to a seven-story apartment building, then a nine-story office building and finally an 11-story office building. J. Jeffers & Co. representatives made multiple appearances in front of the Historic Preservation Commission to seek approval for the project’s many variations. The commission has oversight over the project because it sits within the East Side Commercial Historic District.

Why did the developer switch from apartments to offices? “There are some features on this site that are a detractor to get the top-of-the-market rents, most notably the highway. You end up with a lot of units looking at Interstate 794, which is not a great amenity,” Jeffers told the commission last year. The highway access is an asset for an office tenant, allowing an easy in-and-out for employees and clients. The law firm also cited proximity to The Hop, which runs down N. Broadway, as a reason it liked the location.

In a strange quirk of the city’s zoning code, despite being directly on the streetcar route the project requires a zoning variance from the Board of Zoning Appeals because it is too large for the site. If the city wants the streetcar to be a development driver, as the mayor has repeatedly said, it stands to reason that zoning the adjacent land for larger buildings would encourage bigger proposals.

Jeffers is also leading the redevelopment of the Milwaukee Athletic Club, the St. James Episcopal Church and has secured a purchase option on the Milwaukee Journal Sentinel complex. 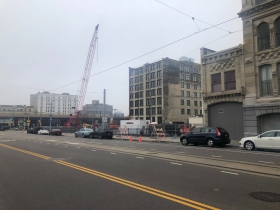 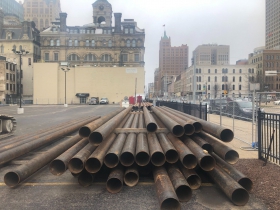 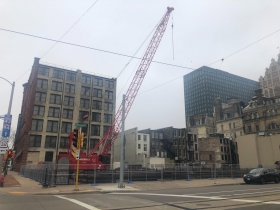 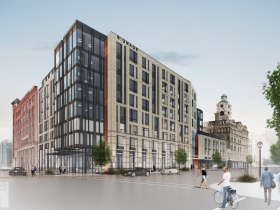 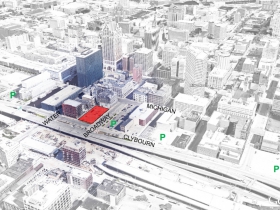 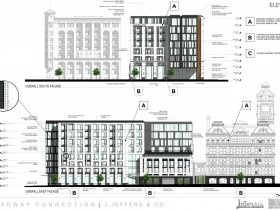 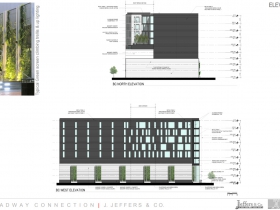 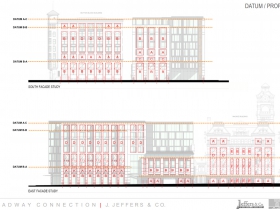 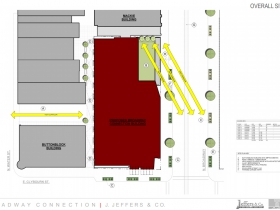