And so many memories of genteel china shop visited by folks like the 4th Baron Wedgwood. 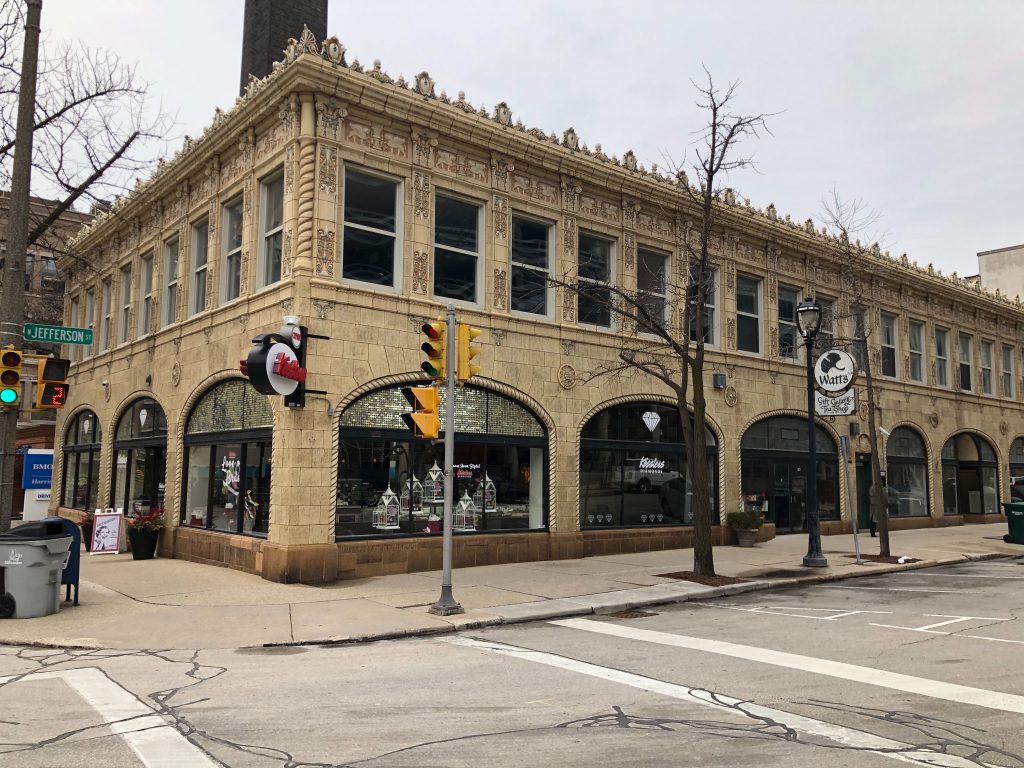 A big question mark about the future of a nearly vacant two-story downtown building was turned into an exclamation point when it was announced in April that the former George Watts and Son Building at 751-765 N. Milwaukee St. (also known by the address, 761 N. Jefferson St.) was to be purchased by Continuum Architects + Planners for $1,500,000, a figure close to its $1,385,700 assessment. The seller was the Watts Family 2012 Irrevocable Trust. The sale was brokered by Transwestern Commercial Services.

The architectural firm plans to relocate its offices to the historic building, which will retain the current retail tenants, including Kessler’s Diamonds and DeLind Fine Arts. Beyond that, plans are in the works. One thing for sure: unlike other recent similar projects in which relatively short buildings downtown hope to expand vertically when redeveloped, this gem will stay as is.

According to an email from Falamak Nourzad of Continuum, principal of the woman-owned architectural firm:

We are remodeling the space with Historic tax credits, to that effect we will not be putting anything on top, as it’s not allowed.

Our plans for our offices are in the making and love to share but it’s a bit early. Let’s talk in a couple of months.

Historic Tax Credits have been employed in many projects Continuum has been involved in: It led the design for redevelopment of the historic Mackie and Mitchell buildings by J. Jeffers & Co. Its current office is located in the 1876 Mitchell Building.

Historic Tax Credit certification requires that the proposed structure be on a registry of approved buildings. This process takes time, but the city’s preservation officer Carlen Hatala has what she calls “good news” on this front. In an e-mail, she writes:

A Lovely Example of its Type

In the mid-1920s the Mediterranean Revival storefront building proved to be a popular architectural design. These structures, with their fine detailing, included such features as terra cotta cladding with vivid coloration, and were commonplace in the new cities of Florida and California, where the style set the design standard for buildings of all types.

The storefront buildings were also to be found in more northerly climes like Milwaukee, usually built on what was then the urban edge, where the automobile was supplanting the bus and streetcar. This one, designed by Martin Tullgren & Sons, cost $120,000 when it was built in 1925. It occupies a 75-foot-by-120-foot site at the southeast corner of the intersection of N. Jefferson and E. Mason streets. Even at the time of its construction, it was unusual in that it was surrounded by many much taller structures, especially upon a lot of such considerable area in the heart of Downtown. It then looked across the street at the stately Layton Gallery of Art, which more nearly equaled it in size and mass, compared to its neighbors. That building is sadly lost, except for a few fragments embedded in an interior wall of the parking garage that replaced it.

One Owner for Nearly a Century

George Watts & Son was a merchant of fine crystal and china established by Thomas Massey in 1870. The Watts family operated the business at various locations from 1885 until the last day of 2016, when the shop’s fabled Tea Room sold its last chicken salad sandwich, and poured its final cup of tea. By that time, it could have been named George Watts & Great-Great-Grandson.

From 1925, when it was built, until the current century, Watts operated on the street and upper level floors of the elegant store. Bargain hunters sorted through the odds and ends in the basement discount space. Gleaming arrays of Baccarat crystal, Rosenthal china, Buccellati silver and other fine items (Herend porcelain miniature rabbits! Quimper dinner plates!) were displayed in an atmosphere that rivaled that of any similar emporium in America, and that found no equal here. In 1978, Watts was one of the few shops to sell licensed reproductions from the Nelson Rockefeller collection.

So highly esteemed was the store, and its operators, that Piers Wedgwood [1954-2014], the 4th Baron Wedgwood, of the pottery dynasty, was a regular visitor. His function was not much different than that of a pot-and-pan hawker at State Fair, but he performed it with such aplomb!

Over the years the firm downsized, as retail shopping, at one time about the only way to shop, became as rare and quaint a pastime as an afternoon high tea ceremony. The business was a victim at first of national catalog merchants, and then, the internet. The glittering gold Watts boxes, embossed with the firm’s signature Gingko leaf, became an increasingly rare sight beneath fashionable Christmas trees. The firm leased out its retail space to DeLind Fine Arts, and Kessler’s Jewelry, which remain the only tenants in the 15,360-square foot building. Zita’s Bridal Boutique, which had a very brief marriage with the north half of the street level, departed two years ago, leaving what is now an empty 4,500-square foot storefront.

The first George Watts was born in Uffcolmbe, England, and came to Milwaukee from England at age 21 in 1870, setting to work with Massey, a merchant who had a store on Reed street, which he moved to Milwaukee St. in 1885, when Watts acquired an interest in the store, purchasing it entirely upon Massey’s death.

His son Howard M. Watts, then 25, became a partner in 1915, at which time the firm adopted the name of George Watts & Son.

In 1929 Howard spent time in Europe producing motion pictures of factories in Limoges and Stoke-on-Trent to document the manufacture of glass and china. “He is called upon to lecture before art and study clubs all over the state or Wisconsin and he is recognized as an authority in his line,” according to Gregory’s History of Milwaukee, Vol. III. The current fate of these films could not be immediately determined, but if extant, they would be of considerable interest to the Decorative Arts community, as well as Milwaukee history buffs.

Howard Watts was succeeded by his son George Watts, a former Marine, who was involved with the store until 1998, when he left for an unsuccessful — but close — mayoral run against John O. Norquist. Watts died, at 82, in 2005.

His 2000 challenge was largely a single-issue race. Watts opposed the demolition of the Park East Freeway stub, a signature project of Norquist’s. Watts used this short connector on the drive to work from his home in Grafton, as did many of his North Shore customers in their commute to Downtown.

Watts was a courtly, kindly gentleman, who maintained good relations with his suppliers, whether peers of the realm, like Wedgwood, or the untitled folks who supplied his Tea Room with fresh produce, not to mention his faithful employees and customers. The Watts store glittered even in the gloom, and was a wonderful respite on a chilly April day. Visitors could walk around a dinner table, set with a variety of china, crystal, silver and linens. Each place setting was marked with the names of the prospective bride and groom who had chosen the patterns for their Watts Bridal Registry.

Watts was one of the first merchants to employ African Americans on the sales floor. Some of these employees remained for decades; they knew their business, and they knew their customers. The Tea Room was once one of many genteel luncheon spots located in downtown stores, and for decades until the end, it was the only one. Its clientele included such regulars as Sen. Herb Kohl. For generations mothers and daughters would have tea at Watts — and then maybe do a little shopping for a trinket downstairs, perhaps in the discount shop in the basement, or maybe a foray into the bridal registry department.

Although the store is gone, the building and the memories remain, as do three of the male Gingko trees planted by a young George Watts himself. 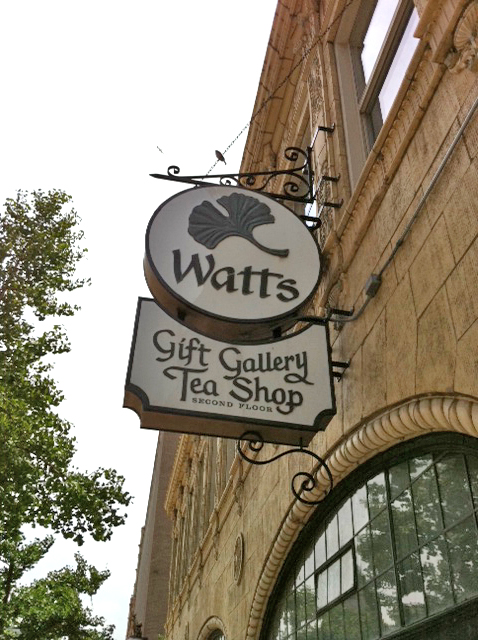 The “George Watts & Son” sign with its distinctive Gingko leaf design, hanging from the Jefferson street facade of the building dates to 1960. The portion below reading “Tea Shop Gift Gallery 2nd Floor,” was added in 1983. 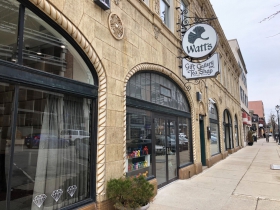 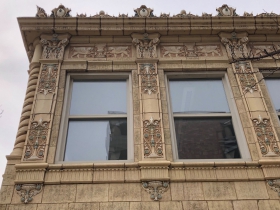 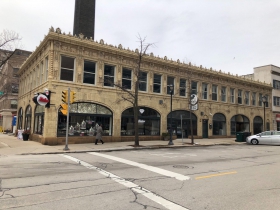 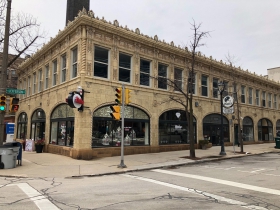 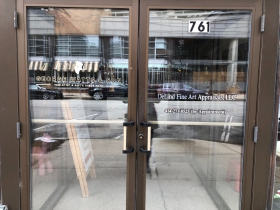 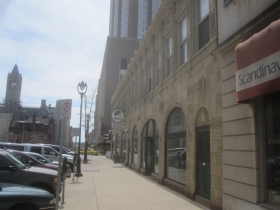 One thought on “What’s It Worth?: George Watts Building Worth $1.5 Million”