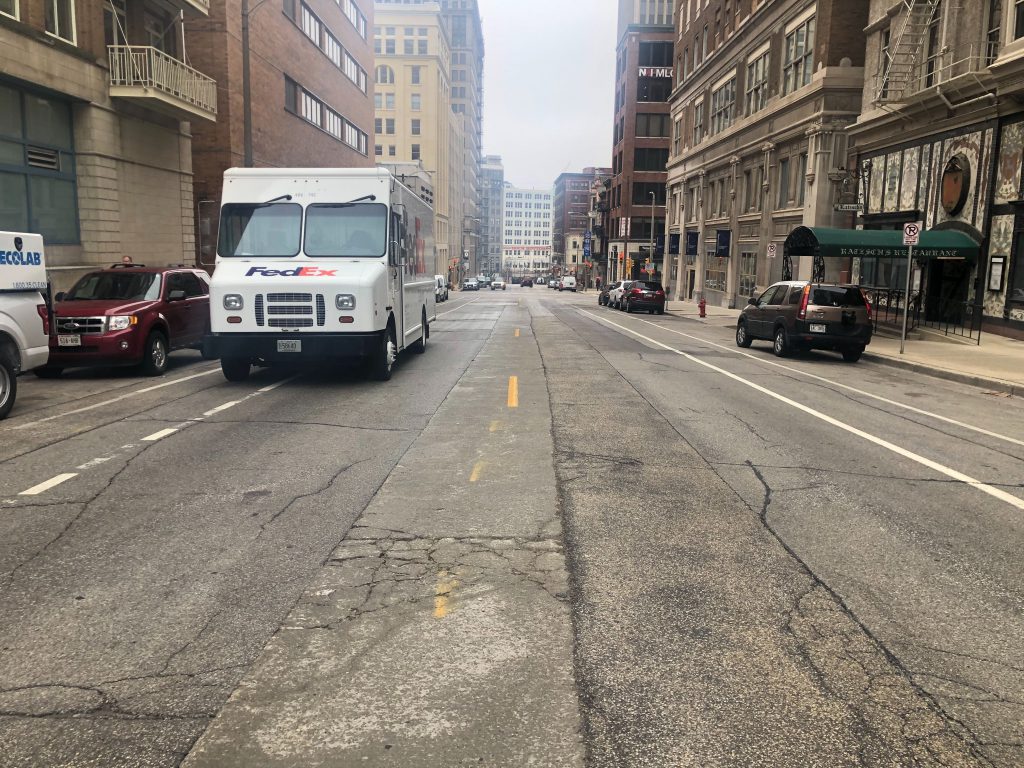 A FedEx truck is parked in the bike lane on E Mason St. Photo by Jeramey Jannene.

Painted bicycle lanes on city streets are intended to create a well-defined, safe space for cyclists. But a new study found that they’re having the opposite effect as motorists change their behavior to drive closer to cyclists, with bigger and faster vehicles getting the closest to bicyclists.

When both a striped bicycle lane and parked vehicle were present, motorists passed bicyclists 1.3 feet closer on average than they otherwise would have according to data from 18,500 vehicle passing events spread over 422 bicycle trips. SUVs were found to pass cyclists six inches closer than sedans in similar situations.

Compounding the issue, the distance decreased as the road’s speed limit increased, the report by researchers from Monash University in Australia found. When the speed limit exceeded 60 kilometers per hour (37 mph), the number of vehicles passing cyclists at a distance of fewer than 60 centimeters (3.2 feet) increased from 5.9 percent to 33 percent.

“We know that vehicles driving closely to cyclists increases how unsafe people feel when riding bikes and acts as a strong barrier to increasing cycling participation,” said Dr. Ben Beck, the study’s lead author, in a statement. The university used on-bicycle sensors to measure the distance.

Why are the drivers moving closer to cyclists? “When the cyclist and driver share a lane, the driver is required to perform an overtaking maneuver. This is in contrast to roads with a marked bicycle lane, where the driver is not required to overtake. This suggests that there is less of a conscious requirement for drivers to provide additional passing distance,” said Beck.

Milwaukee has over 100 miles of painted bike lanes on its streets.

So what does Beck, the president of the Australasian Injury Prevention Network, recommend? Separating cyclists from motor vehicles by a physical barrier.

The City of Milwaukee has recently taken small steps in this direction. Protected bike lanes have been installed on the Locust St. and North Ave. bridges over the Milwaukee River. The city has also created protected lanes on E. Kilbourn Ave. by reversing the position of the parking lane and bike lane. Both approaches have met with problems: vehicles have demolished the barriers on the bridges and can be seen parking in the bike lanes on Kilbourn.

The Department of Public Works has added painted buffering to bike lanes where space permits.

DPW has also initiated a bike boulevard program where vehicle speeds are reduced and through-traffic is encouraged to use parallel streets.

Both the Bicycle Federation of Wisconsin and Wisconsin Department of Transportation have guides encouraging riders to “take the lane” if you are able to maintain speeds comparable to traffic. Wisconsin law allows riders to take the travel lane when the road is too narrow to bicycle alongside vehicles. WisDOT encourages a distance of three feet be maintained from both the curb and any parked cars (to avoid being “doored”).

Riders age 11 or older are prohibited by law from bicycling on the sidewalk in Milwaukee.