Tech publication The Verge tries to figure out what Foxconn is actually doing here. LOL. 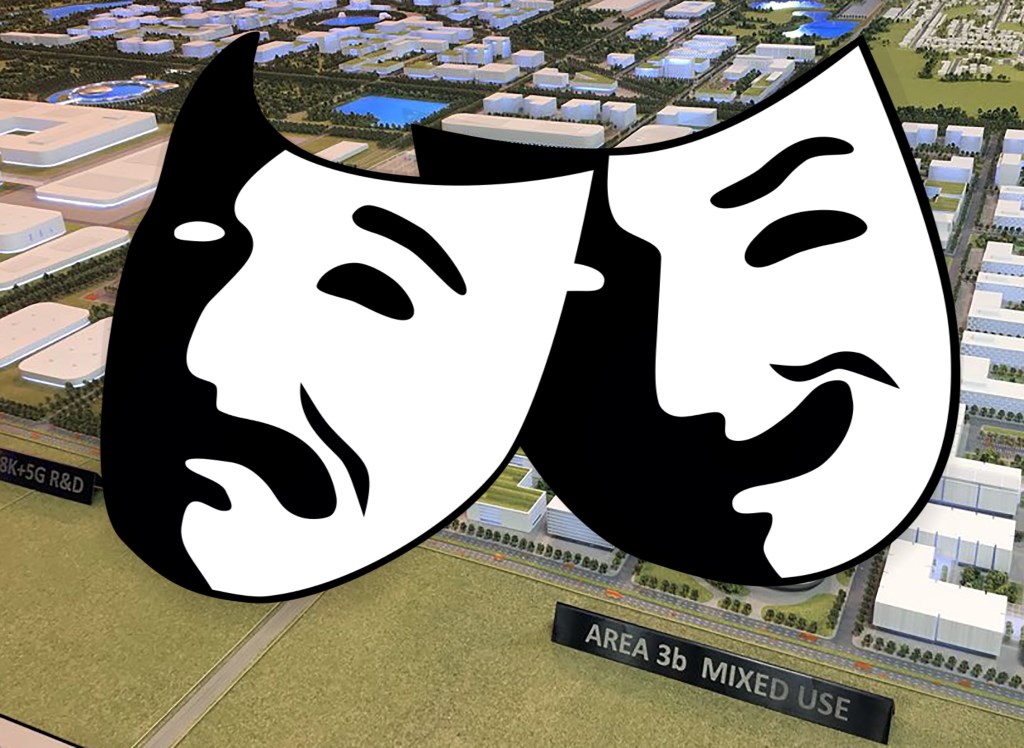 It was back in July that I did a column suggesting the Foxconn satellite centers in Milwaukee, Eau Claire and Green Bay had no discernible business purpose and were simply show places meant to help then Gov. Scott Walker get reelected, by convincing skeptical voters that Wisconsin’s $4.1 billion investment would have benefits throughout the state.

Yesterday the international tech publication, The Verge, published a story that tried to determine what exactly was happening in those three cities, and for good measure, in Mt. Pleasant, where the LCD plant promised by Foxconn is supposed to be built. Reporter Josh Dzieza didn’t find much in these cities and couldn’t get many answers to his questions, and his whole journey here turned into a funny expose.

“Adding to the confusion is the comical level of secrecy that’s shrouding the Foxconn project,” he writes. “The company almost never grants interviews. Even Mount Pleasant’s Village Board is supposed to route all Foxconn-related questions through a public relations firm. Getting answers is so difficult that a local TV reporter recently drove to the house of village president Dave DeGroot, who, hiding behind his half-closed door, told the reporter to go away.”

Dzieza began his journey in Milwaukee, which was supposed to become the North American headquarters for Foxconn. “When people come to Wisconsin to visit Foxconn, the Milwaukee headquarters will probably be one of the first stops they make,” Foxconn’s frequent spokesperson Louis Woo has declared. If so, they won’t find much.

Foxconn first announced its intention to create this headquarters more than a year ago, and by the summer had announced its purchase of a seven story building in Downtown which would be transformed into an “innovation center” and “office” employing 500 people, with work on this scheduled to start in two months.

Nearly six months later Dzieza found almost no signs of Foxconn there: “The ground floor consisted of glass-walled conference rooms. They were never occupied when I passed by over the next two days. Their whiteboards remained immaculate; a lone green Ethernet cable coiled on a table never moved,” he writes.

“I walked into the front lobby, a small space undecorated except for a narrow strip of Foxconn-spangled wallpaper behind a receptionist desk… The receptionist politely declined my requests to speak with someone from Foxconn, directing me to a media email. When I told her I’d tried it already and received no response, she assured me Foxconn people do exist, but finding them would take some investigating…

“The Foxconn employees I approached invariably said they couldn’t talk to the press… One even shouted, “Oh no, sorry!” while literally running down the sidewalk away from me.

“What I can confirm: there are Foxconn people there… A search of LinkedIn and local job boards indicates that there are likely a few dozen of them, mostly recruiters, project managers, and ‘concierge’ employees.”

“When I called the architect at the head of the firm that sources said had won the redesign project (for the downtown building) and told him I was working on a story about Foxconn, he promptly hung up. Subsequent attempts to reach him were not returned.”

Next Dzieza went to Eau Claire, where Foxconn had promised last July that it would create “an incubator and laboratory for next-generation technological solutions,” and a second office space that would be “part of a talent and innovation network for the AI 8K+5G ecosystem,” which would be operational by the beginning of 2019. Meaning by now.

What Dzieza found was a building that was supposed to be the Innovation Center, whose “floor-to-ceiling windows were dark, with moisture-wrinkled signs saying to keep the doors closed. Peering through the glass, I saw a bare concrete space with a few fire extinguishers, sawhorses, and unopened bags of concrete on the floor. Its transformation into an innovation center appeared far off.”

“Public records show that a renovation permit has been taken out for the space, but multiple sources involved with the innovation center process say no one working on the project has a contract, and no one has been paid.”

As for a second building that was supposed to be part of this Eau Claire technology hub, “the building never sold.” Its owner, Brian Johnson told Dzieza he “had planned to turn floors three through six into apartments, but Foxconn said it wanted the third floor for offices, so he held off. Then Foxconn said it didn’t need the floor. Then it said it did. ‘We went back and forth on that three or four times,’ he said, with Foxconn asking for repeated extensions. Then Foxconn tried to renegotiate the contract for $500,000 less. That was the final straw.” In December Johnson terminated the contract.

Next Dzieza went to Green Bay, where Foxconn announced last June it would build yet another innovation center in a six-story building that, like the others, would employ workers developing Foxconn’s AI 8K+5G ecosystem and would be open by the end of last year.

“And like everywhere else,” Dzieza writes, “there was no sign of Foxconn. Instead, there was a children’s museum, a bike shop, an architecture firm, and three unlabeled floors on the elevator guide…The shipping company on the top floor directed me to the building manager who directed me to a maintenance technician who said he didn’t have a lot of details himself, but he wasn’t at liberty to discuss it further…”

“Kevin Vonk, the development director for Green Bay, said that Foxconn has fallen behind schedule…As for what it plans to do with the space, Vonk thought Foxconn would occupy only a single floor of the six-story building.”

Then it was on to Mt. Pleasant in Racine where that massive LCD plant is supposed to be built, the one that industry expert and Harvard Professor Willy Shih estimated would cost $5 billion and take two years to build in a recent story by Urban Milwaukee. Nearly two years after the Foxconn deal was first announced, Dzieza didn’t find much on the 800-acre site now owned by Foxconn, which President Donald Trump promised would become “the eighth wonder of the world.”

“In the southeast quadrant,” Dzieza writes, “stands the only structure built so far, a looming gray warehouse that people involved with the project call the ‘multipurpose building,’ without ever quite explaining what its multiple purposes include. Asked what the building was for, a representative of Mount Pleasant deferred to Foxconn, which did not respond.

“Foxconn’s own plans for the space are amazingly vague. In September, it released a ‘sneak peek’ video showing a sleek campus full of glass orbs and gardens patrolled by self-driving cars, but no officials I spoke to had seen an explanation of what any of the buildings were, and Foxconn declined to provide one to The Verge.”

When Democratic Assembly Minority Leader Gordon Hintz pointed out that one of the fountain-fronted structures in the video “was actually just a photo of a city park in Bradford, England, Foxconn took the video down,” Dzieza writes. But “a version remains on Mount Pleasant’s website, now bearing the disclaimer that the plans are ‘subject to change under future design circumstances.’”

Dzieza notes the recent announcement by Foxconn that it had awarded $34 million in contracts for roadwork and infrastructure on its Mt. Pleasant land and quotes Shih and Bob O’Brien, president of Display Supply Chain Consultants, who both say an LCD plant couldn’t be built on the compressed gravel foundation that’s been created at Mt. Pleasant, a problem I reported last week. To date, no one else in this state’s press has checked with Shih or O’Brien about this.

Dzieza also contacted Foxconn to ask “what factors led it to again believe it was economical to build a factory in Wisconsin (after Woo had said it was no longer a cost effective venture), where the glass would come from, what devices would be made there… and why factory construction was delayed several months. Foxconn replied with a broad statement, saying the factory was, in fact, ‘on time as scheduled’ and that construction would begin this summer, but it did not address the other questions.”

Rep. Jonathan Brostoff told Dzieza the Foxconn project is “100 percent scam,” a Midwest version of the fraudulent Fyre Festival. Hintz, who now serves on the Wisconsin Economic Development Corporation board, said state officials needs to “right-size” the project “to something realistic, likely a few hundred research jobs, and that Foxconn needs to be honest about its plans.”

“For something that had a 25-year payback, building a factory because the president wants you to for reasons that have nothing to do with market viability is insane,” Hintz declared.

Meanwhile, when Foxconn sees a real market opportunity, it moves very quickly. In December the company announced it would be spending $356 million to expand its plant in India to assemble top-end iPhones. Just four months later it announced it would start a trial run of production at the plant.

As blogger Jim Rowen recently observed: “The average annual wage for a production worker in India is just over !175,000 rupees” or about $2,500 in U.S. dollars. “One hiring website pegs the average production worker pay in Racine at $10.15 an hour, or just over $21,000 annually – – not a family-supporting wage – – but more than a Racine worker’s Indian counterpart would earn in over eight years.”

That might help explain why Woo once noted LCD television screens simply can’t be manufactured in America in a cost-effective way. As he put it, “We can’t compete.”

It might also explain why Foxconn has yet to produce anything in Wisconsin nearly two years after Walker first announced the company’s historic deal to turn Wisconsin into a high-tech powerhouse.

-And a quick note: if you’re wondering why your pot-holed roads aren’t getting fixed, this story might help explain.

Categories: Back in the News, Business, Politics

8 thoughts on “Back in the News: Foxconn As High Comedy”