The Rise and Fall of John Keefe

John C. Keefe seemed to have it all. He was married to the daughter of a wealthy banker who helped him become the president of a baking business and allowed him to dabble in real estate. But Keefe had long had a desire to be a lawyer – and reaching that goal led to his downfall and disgrace.

Keefe was born in Massachusetts in 1846 but spent most of his childhood on his grandfather’s one-square-mile timber land near Jackson in Washington County. At the age of 17, he began teaching at local schools and then attended the University of Wisconsin, receiving a bachelor’s degree, and at 26, became the principal of the Barton High School near West Bend.

In 1873, he moved to Milwaukee and changed careers, becoming a journalist at the Evening Wisconsin. Four years later he purchased a one-half interest in the Milwaukee News and became its editor. He acquired many friends in literary and business circles because he was well-read, conversant on many topics, and a good speaker. During this time a local book of poetry was dedicated to him.

At the age of 32, Keefe married Maria O’Neill, the only child of Edward O’Neill. O’Neill had been the first Irish-Catholic mayor of Milwaukee when he was elected to four terms in that office during the 1860s. He had become wealthy as a merchant and bank president and his money put Keefe in the president’s seat of the Milwaukee Cracker and Candy Company. O’Neill was a generous benefactor of Catholic institutions in the city and when he died in 1890 he left major chunks of his estate to Milwaukee’s Irish-Catholic churches and orphanages.

Meanwhile, Keefe’s fortunes grew. He built a mansion at the south end of Terrace Avenue overlooking the lake. And Keefe Avenue on the North Side was named for him by real estate associates. In 1892, he sold his share of his business and did some traveling before announcing that he was going to achieve his life-long ambition and become an attorney. Two years later, he passed the bar and formed a partnership with Moses H. Brand. Keefe became a prominent lawyer, winning high-profile cases, and his trajectory continued upward.

But during the next five years, Keefe was sued by several clients for misuse of their funds and was also charged with perjury. His court case drew a full house, with many attorneys among the spectators, when he was disbarred in 1899. Newspaper headlines on the front page called attention to his disgrace. Although his disbarment prohibited him from ever practicing law in Wisconsin again, he still listed his occupation as lawyer in the 1900 United States census and in city directories through 1902, when he left town.

Milwaukee courts were not through with him yet, though. In 1912, Keefe was brought back to town and put in jail. A Milwaukee detective arrested him in California on charges of embezzlement. The 66-year-old Keefe was described in the Milwaukee Sentinel as “broken down, unkept, and with several day’s growth of beard.”

The charge might have left his father-in-law turning over in his grave. Since 1900, Keefe had embezzled more than $4,000 as guardian of the estate of two orphan girls at St. Rose’s Orphanage, a major beneficiary of Edward O’Neill’s generosity and an institution close to his heart. A settlement was reached, but not before Catherine Dunigan, one of the sisters, who suffered from tuberculous, fainted on the witness stand.

Keefe left Milwaukee and returned to his small fruit farm in Orange County, living amid lemon, orange, and walnut trees. Maria O’Neill Keefe died in 1915 and, according to biography of the man in a history of that county published soon after, “Mr. Keefe has been in communication with the spirit world.” His one-thousand-word biography fails to mention his Milwaukee law career. He died there in 1929 and is buried in Santa Ana.

When Keefe Avenue was named, it was the northern border of the city; now it is more than seven miles south of Milwaukee’s northern edge. Keefe Avenue stretches, with a few interruptions, from N. Humboldt Avenue on the east to N. Mayfair Road on the west. A trip down this mostly residential street reveals housing built between the 1890s and the mid-20th century. 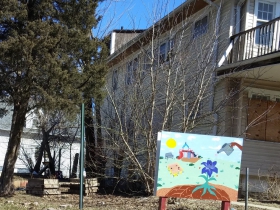 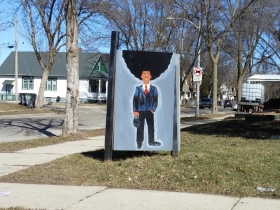 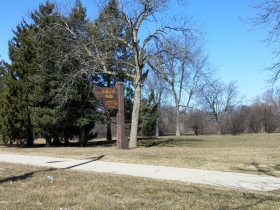 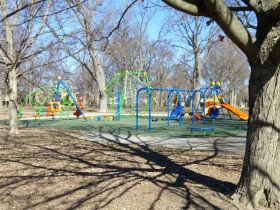 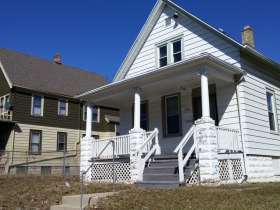 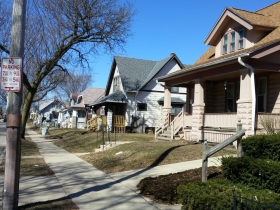