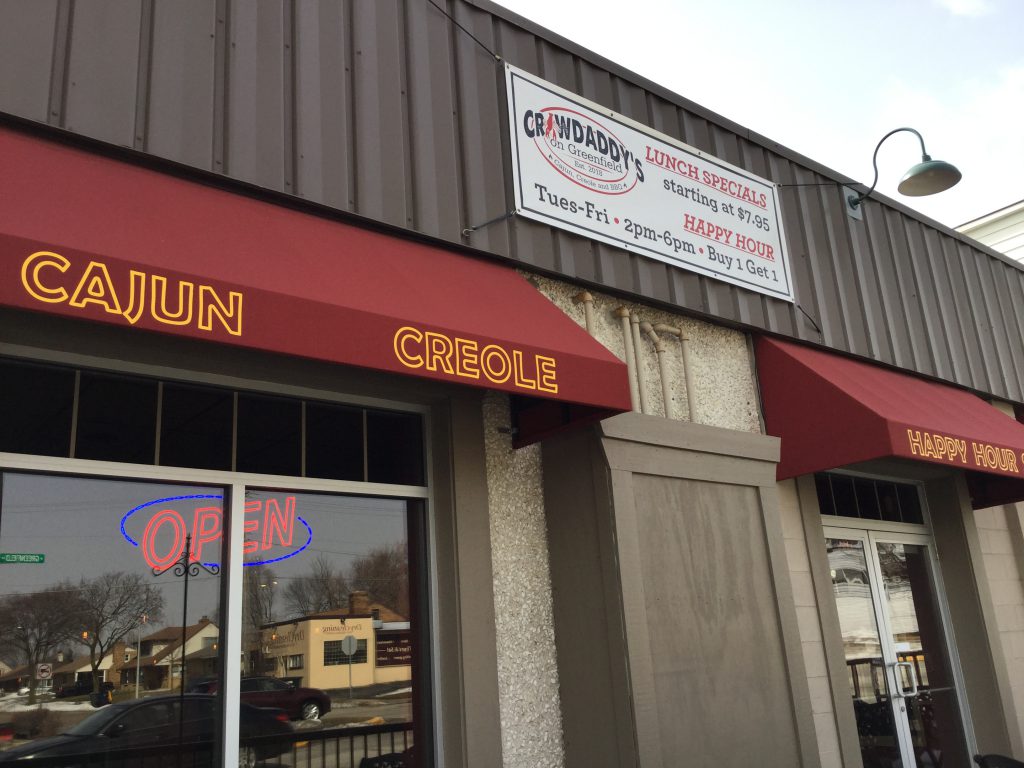 We started lunch with VooDoo Juice, just one, to share after our server Mary Beth mentioned it’s a potent combo of orange, banana, pineapple, and coconut rum. A combination of cranberry, orange, and pineapple juice camouflaged the intense alcohol in this fine complement to the complex flavors we enjoyed in our southern-inspired lunch. Despite its unattractive muddy purplish color, it tasted like a fruit drink, something you want on the patio on a steamy July evening. It went down real easy.

Since Crawdaddy’s specializes in Cajun, Creole, and BBQ, we went directly to the Cajun Chicken and Sausage Gumbo, traditionally thickened with a dark roux to give it deep rich flavor. This gumbo did not let us down. Our cups, sized more like bowls, had the requisite bell pepper, celery, and onion, as my southern lunch companion noted, “It has the holy trinity that must be present to call it an authentic Cajun or Creole recipe.” Our gumbo had a dark brown color, characteristic of a roux that’s been nurtured to the point where the flavor is potent. It also incorporated enough chunks of chicken and andouille sausage to call it a hearty lunch along with the fresh rolls our server brought to the table as soon as we were seated.

We continued on to Jambalaya and Fried Catfish Etouffee, Bayou Classics on this extensive menu. The jambalaya, with peppers, onion, and celery, again the “trinity,” mingled with chicken, andouille, and five large succulent shrimp. It reminded us of paella, an indulgent bowl full of seafood and meat in a spicy sauce. The chef paired it with the traditional rice to soak up the juices, and a small corn muffin.

The Fried Catfish Etouffee had a crisp cornmeal crust on the fish that sat on top of the sauce to retain its crisp. Half a dozen crawfish tails rounded out the bland gravy-like sauce that looked better than it tasted. Red beans and rice, in a separate dish, added calories, but not much flavor.

After a second visit to Crawdaddy’s, I might suggest you avoid the Blackened Scallops and Grits if you’re looking for a filling lunch. The scallops were tasty, all six bites, nicely blackened, with the buttery richness you expect, and cooked to the right degree of doneness. This Lunch Bayou Classic, served in a “Lunch Sized Portion,” would have made an adequate appetizer, not a complete meal. Half-roasted cherry tomatoes added color, but they were cold; a few bites of smoked bacon were a nice surprise; the grits that surrounded the scallops were meh.

My companion, who ordered the Chicken and Grits, partially rescued them with juice from the collard greens that came with the dish. The fried chicken breast, on the bone, had a crisp, non-greasy crust, while the white meat was juicy and tender. The meal hit its stride with the greens, soft, sweet from a hint of maple syrup, with a tart vitality that balanced the grits.  That said, the chicken and grits were a bargain, a Lunch Special for $10.00.

If you go to Burgers and Sandwiches as another companion did, you will like the Butcher’s Burger, a mix of short rib, brisket, and chuck, ground into an 8oz. burger served on a toasted brioche bun. It came with fries or onion strings, nothing special, but those strings will always be a greasy decadent pleasure.

Other burgers on the menu include one with house-smoked pork belly, and one with andouille sausage, arugula, caramelized onions, and chipotle remoulade.

Crawdaddy’s is a large restaurant with a back room for private parties and a sizable bar. Exposed brick walls, large photos of jazz greats, and a hanging saxophone set a stage to let the good times roll.

You might also want to explore the dessert menu as I did. As server, Mary Beth, recited Pecan Pie, Crème Brulee, Bread Pudding with cherries, not raisins, I stopped her at Caramel Pecan Bourbon Cake. Please excuse the cliché, but every bite of that four-layer cake literally melted in my mouth. 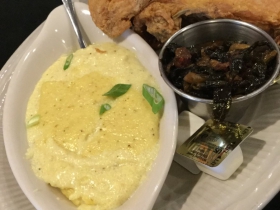 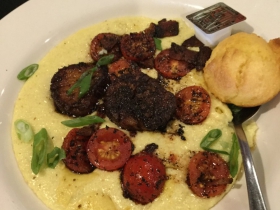 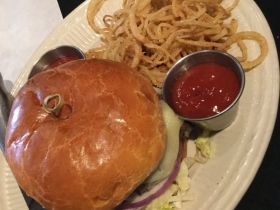 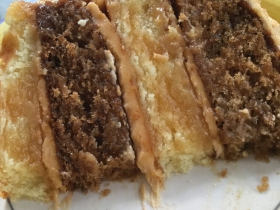 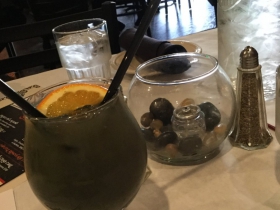 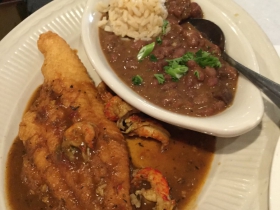 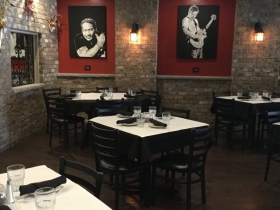 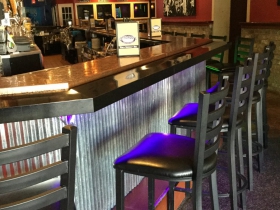 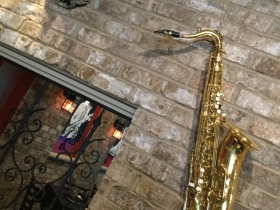 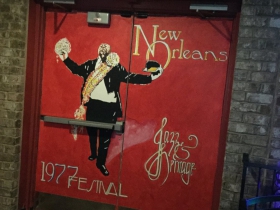 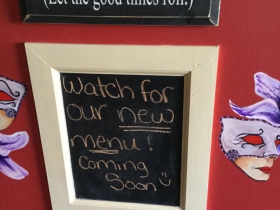 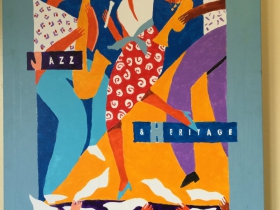