New Peruvian Restaurant for West Side 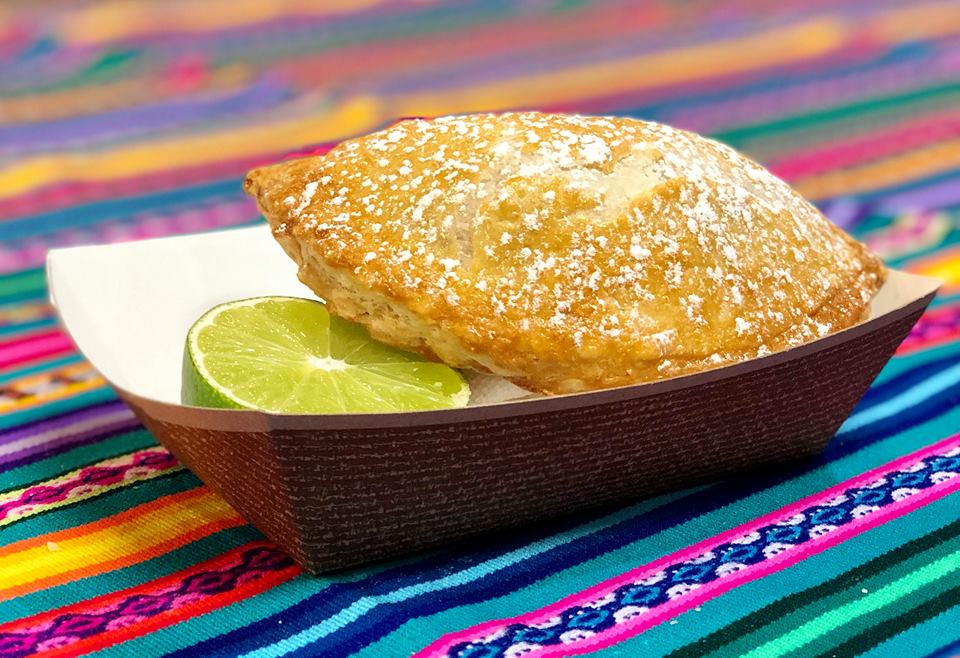 The food trailer Triciclo Perú, which specializes in Peruvian-style empanadas, is opening a restaurant at 3801 W. Vliet St. Owners Amy Narr and Mario Diaz Herrera have been running the food trailer for a year and a half, opening it after moving to Milwaukee in 2016. Narr is a UW-Milwaukee alum, while Diaz, a native of Lima, Peru, has experience in public relations, event planning and marketing. Narr met Diaz while working in Peru for the Peace Corps, and the two eventually married.

The empanadas, flaky-crusted turnovers, hold fillings with Peruvian flavors, such as chicken with green olive, raisins and hard-cooked egg.

Triciclo Perú, which regularly sells five kinds of empanadas at its trailer, will open with 10 varieties, including lomo saltado, the traditional Peruvian dish of stir-fried steak and french fries with tomato, onion, garlic and soy sauce; Peruvian beef stew with peas and carrots; and fusion empanadas such as soy chorizo, with potatoes and red pepper.

Besides empanadas in their usual buttery pastry, the restaurant will have vegan and gluten-free versions, Narr said. The space will allow Triciclo Perú, which now rents a shared kitchen, to designate an oven for baking gluten-free empanadas.

Triciclo Peru is part of the sequence of buildings that contains Pete’s Pops (3809 W. Vliet St.). The restaurant will use a kitchen located in an adjoining building (3805 W. Vliet St.). 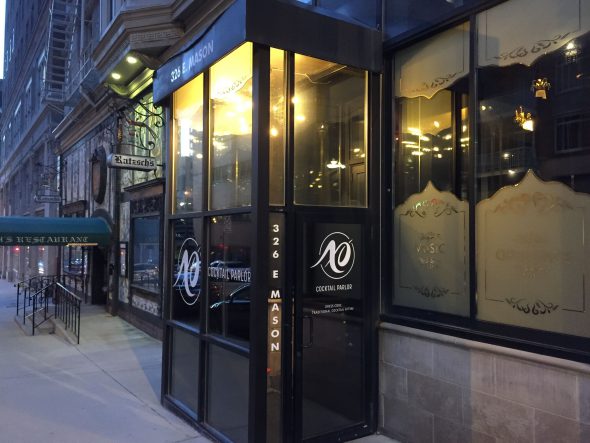 XO Cocktail Parlor, located in the former 42 Lounge space (326 E. Mason St.), held a soft-opening over the weekend in East Town. XO will cater to a young, professional crowd. While there will eventually be appetizers and small plates, XO’s small kitchen prevents a larger food menu.

The initial drink menu contains eight craft cocktails. Early on, the cocktail recipes will be kept simple to gauge the customer base and its demands. The simple recipes are also meant to prevent the staff from being overwhelmed, as Taylor says some staff are newer to the industry. “I want to invest in my staff,” he says. “We will have training with various distributors and other people in the industry. Eventually, I want them to become mixologists.”

Taylor describes XO as an “anti-club.” There will be no live entertainment or DJs. In order to maintain a relaxed mood, Taylor says there will only be background music. While the music will be noticeable, it will not be so loud that it drowns out conversation. The space has modular furniture with handpicked fabrics and styles. “It’s all done to provide a comfortable and opulent vibe,” Taylor says. “It’s a place where as soon as you walk in, you want to sink into one of the seating areas.”

A grand-opening date has not been set, but Taylor hopes for sometime in mid-to-late April. Until then, the lounge will have limited hours. XO Cocktail Parlor will be open from 5 p.m. to 11 p.m. Wednesday and Thursday, and 5 p.m. to bar close Friday and Saturday. 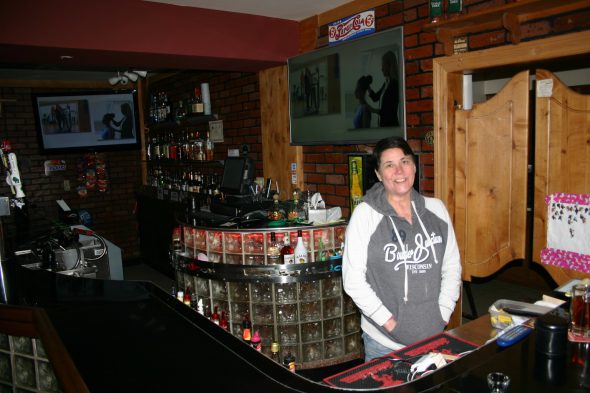 Debbie Dean behind the bar at Neighborhood Bar. Photo courtesy of Warren Johnston.

A new business, called Neighborhood Bar, opened on March 28. Proprietors Warren Johnston and Debbie Dean plan to create a welcoming and “stress-free” establishment at 4607 S. Whitnall Ave. in St. Francis. Johnston and Dean, who live in the area, frequented the bar under its previous owner, and decided to take over when it announced its closure.

While this will be Johnston’s first time opening the bar, it will not be a first for Dean. Urban Milwaukee details the couple’s connections to downtown Milwaukee:

…each worked in downtown Milwaukee for over a decade. Johnston has been bartending at My Office (763 N. Milwaukee St.) for over 14 years, while Dean served as a public service ambassador for Milwaukee Downtown, BID 21 for 17 years. Dean also operated Club Garabaldi (2501 S. Superior St.) with her ex-husband, Joe Dean, when the bar opened in 2000.

As well as some plans for Neighborhood Bar:

The drink and food menus will be kept simple. There will be basic cocktails and an occasional bloody Mary special. During those times, there will be a signature garnish and house-made bloody Mary Mix. There are no appliances in the kitchen so there will not be a large food menu. However, small basic bites will be cooked in a pizza oven. Johnston also notes there are other restaurants in the area where customers can have food delivered or brought in.

Neighborhood Bar will open at 3 p.m. Monday to Friday and 11:30 a.m. on Saturday and Sunday. Johnston says they will also open early for Packers’ games, and will adjust closing times as needed. 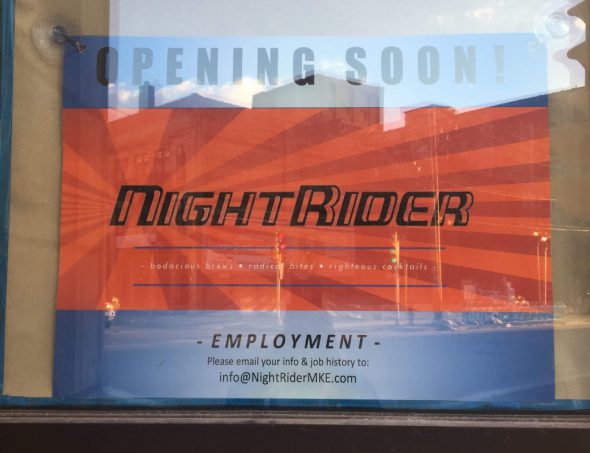 A new bar, called Night Rider, could be headed to the space at 133 W. Pittsburgh Ave. However, few details around the business are known. Last year, licenses for a business called Pub Fiction were approved for the space. Urban Milwaukee reports:

A business called Night Rider is “opening soon,” according to a sign attached to the space at 133 W. Pittsburgh Ave. The sign gives an email for employment inquiries, and also promises the new bar will have “bodacious brews, radical bites and righteous cocktails…”

According to the City of Milwaukee License Division, licenses were approved for Pub Fiction. However, the licenses have not been issued due to an occupation hold and unpaid fees. It is unclear if Kidwell and Cave are involved in Night Rider.

Nite Owl Drive-In (830 E. Layton Ave.) officially reopened for 2019 on March 26. The eatery is only open spring through fall, and its renewed operation is an unofficial — and very welcome — sign that winter is no longer here.

OMC’s Lori Fredrich provides this take on the fare:

It’s the 71st season for the iconic spot, which serves up a menu of classic offerings including hamburgers, cheeseburgers, grilled cheese sandwiches, fish dinners and all the fixins. There are also fries, onion rings, shakes, malts and sundaes … pretty much everything you need to celebrate the spring awakening.

Paul and Joe Bartolotta of The Bartolotta Restaurants were semifinalists for the outstanding restaurateur category. Nominees in the category are:

Bryant’s Cocktail Lounge was a semifinalist for the outstanding bar program award. Nominees that advanced are:

Milwaukee chefs were also again semifinalists in the best chef category for the Midwest division. This year’s class included Dane Baldwin of The Diplomat, Karen Bell of Bavette La Boucherie and Dan Jacobs and Dan Van Rite of EsterEv.

Nominees who advanced are: