Council could override but two aldermen have switched to Barrett’s side.

By Edgar Mendez, Milwaukee Neighborhood News Service - Mar 15th, 2019 11:49 am
Get a daily rundown of the top stories on Urban Milwaukee 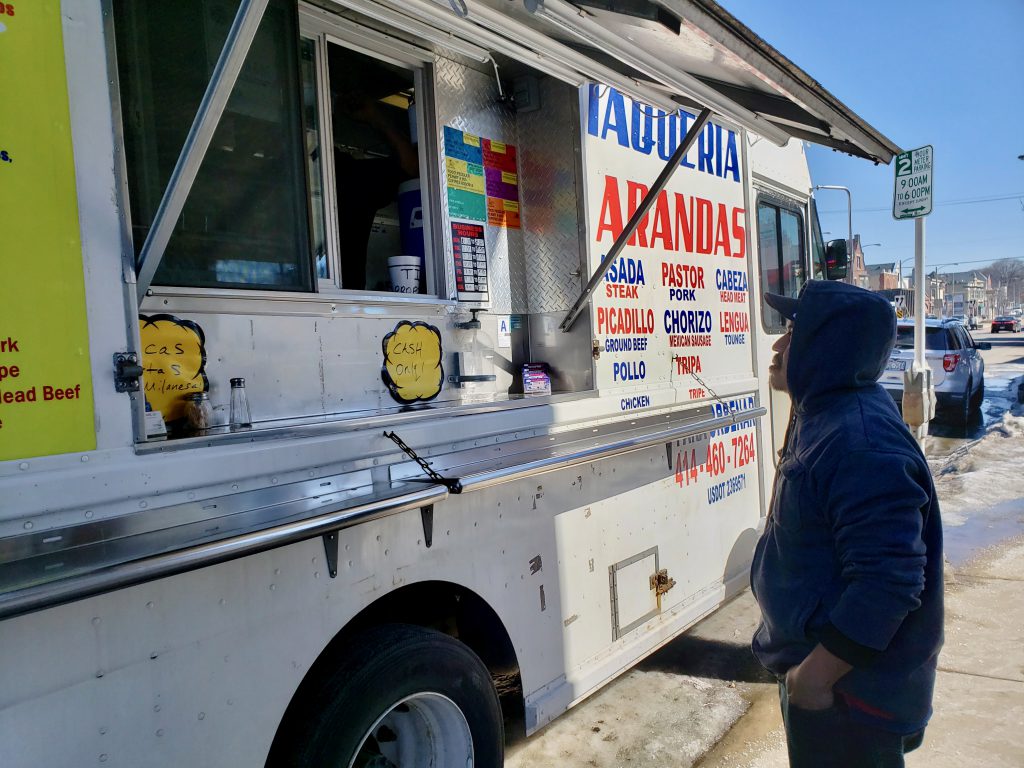 A customer waits for his food at Taqueria Arandas taco truck. Photo by Edgar Mendez/NNS.

Although Mayor Tom Barrett has vetoed a ban of food trucks along a stretch of West National Avenue that runs from South 27th to South 39th streets, the issue appears to be far from over.

Patty Doherty, a longtime aide for Ald. Bob Donovan, believes the Common Council will vote to override the veto.  A two-thirds majority vote is needed to do so.

Donovan, who recently announced he will retire after his term ends in 2020, sponsored the proposal to prohibit food trucks, which the Common Council passed unanimously in late February.

Donovan championed the ban because of safety concerns and complaints from business owners. He also has supported food truck bans elsewhere in his district, including along some stretches of South 35th Street, West Mitchell Street and West Lincoln Avenue.

Two aldermen who initially supported the ban told the Milwaukee Neighborhood News Service they have changed their minds.

Tony Zielinski, who represents parts of the South Side and Bay View on the Common Council, said in an email: “I did not hear any opposition to the proposal before the vote-that is why I supported it at the time. After hearing from residents, I am opposed to the proposal.”

In addition, Ald. Cavalier Johnson also stated he would vote in support of the mayor’s decision but did not explain why.

The mayor’s veto, which was communicated to council members on March 6, but not made public until Tuesday, temporarily eased the mind of Francisco Santos, the owner of Taqueria Arandas taco truck. His truck was parked near the corner of South 37th Street and West National Avenue, an area that will be off-limits if the ban is reinstated.

“I’m happy that I won’t have to leave for now because that would really hurt my business,” Santos said. “My clients know where to find us.”

Santos’ truck, which had a steady flow of customers around midday, appears to be the only food truck along the proposed route of the ban, which is why he thinks he was singled out.

“It seems like it was only me that they are going after, but what can I do?” he said.

Donovan mentioned the truck during an interview with Urban Milwaukee shortly after the ban. He said he had reached out to the owner about complaints, but said the owner “just didn’t want to work with us.”

Santos, whose truck was parked next to a two-hour parking sign, acknowledged that his truck does not usually move every two hours.

“We move when we can, but sometimes it’s only once a day,” he said. Moving more often could cause accidents, he said.

It’s a claim that Doherty finds ridiculous. She said problems have increased because no one enforces the area’s two-hour parking limit.

In the letter to the Common Council that explained his veto, Barrett said a ban would only move trucks to other locations, could stymie entrepreneurs and that a “de-facto district-wide ban enacted over time” could become a liability for the city.

“I have consulted with the Milwaukee Police Department, DPW Parking Enforcement, and the Health Department on enforcement practices for the ordinances we have in place,” Barrett wrote. “I am positive that current enforcement activity is adequate and responsive.”

Donovan plans to dispute those claims during the council’s March 26 meeting.

For Doherty, the issue is simple.

“If the trucks would follow the rules in these areas, no one, not the business owners, the residents, or the alderman, would object to them parking on National for the time limits allowed,” Doherty said.

One thought on “Will Mayor’s Veto of Food Truck Ban Stand?”