The Fortress on Fourth looks much less imposing these days.

You watched the roof being blown off the Bradley Center, now see how contractors are stripping the shell of the building down to the ground.

With the roof now gone, the building, or what’s left of it, already looks dramatically different. But in recent weeks the demolition team has begun dismantling the two glass lobbies. The west lobby is gone, with the entire facade having been stripped to the bone. From N. 6th St. one can see straight into virtually every part of the building. The east lobby, with every window removed, will soon sport the same barely-there appearance.

The end goal is for 90 percent of the structure, including everything from bathroom partitions to the massive scoreboard, to be recycled or reused according to CAA Icon’s Mike Abrams. The firm is representing the Milwaukee Bucks on the construction of Fiserv Forum and demolition of the Bradley Center.

Then comes the recycling. The remaining seats, thousands upon thousands of them, were sent to a local recycling firm to be dismantled and recycled. No market was found for them in sufficient numbers according to Abrams.

Brookfield-based Hunzinger Construction is supervising the work for the Milwaukee Bucks, while Veit & Co., a Minnesota-based firm, is performing the demolition work.

The Bucks were required to pay to demolish the formerly state-owned structure as part of the arena financing deal. The stadium, deemed obsolete by NBA standards, opened in 1988.

What comes once the 7.2-acre site is completely cleared? That remains to be seen. The Bucks’ real estate affiliate, which acquired the arena and associated land as part of the Fiserv Forum funding package, has yet to release specific plans for the site. With a full-fledged push for the 2020 Democratic National Convention underway and major construction projects often taking over two years, it’s more likely the site will be used as a staging areas for politicians, reporters and delegates than a new building in 2020. But long term, the Bucks ownership and the city would both like to see the site developed.

And while it’s not immediately obvious, the Bradley Center and last week’s Friday Photos site, River One, are connected. During a hearing regarding a street closure permit, a member of the demolition team said that a market for the facade’s granite panels wasn’t found and they would instead be crushed and used in construction projects, likely within 10 miles of the former arena. That crushing and distribution will be led by Michels Corp. at the site of River One. Michels has space because River One’s first phase doesn’t fill the entire site.

Can’t get enough Bradley Center demolition? Watch shaped charges destroy the roof from the outside and inside. 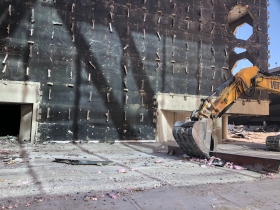 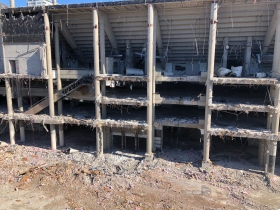 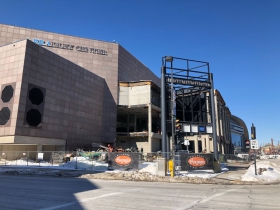 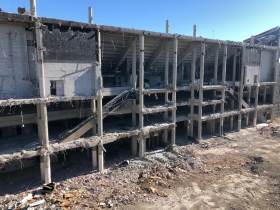 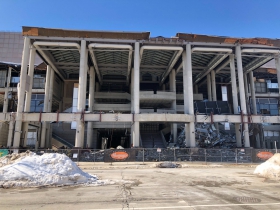 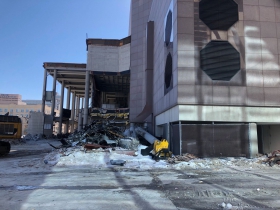 One thought on “Friday Photos: The Vanishing Bradley Center”