We the Irrelevant People 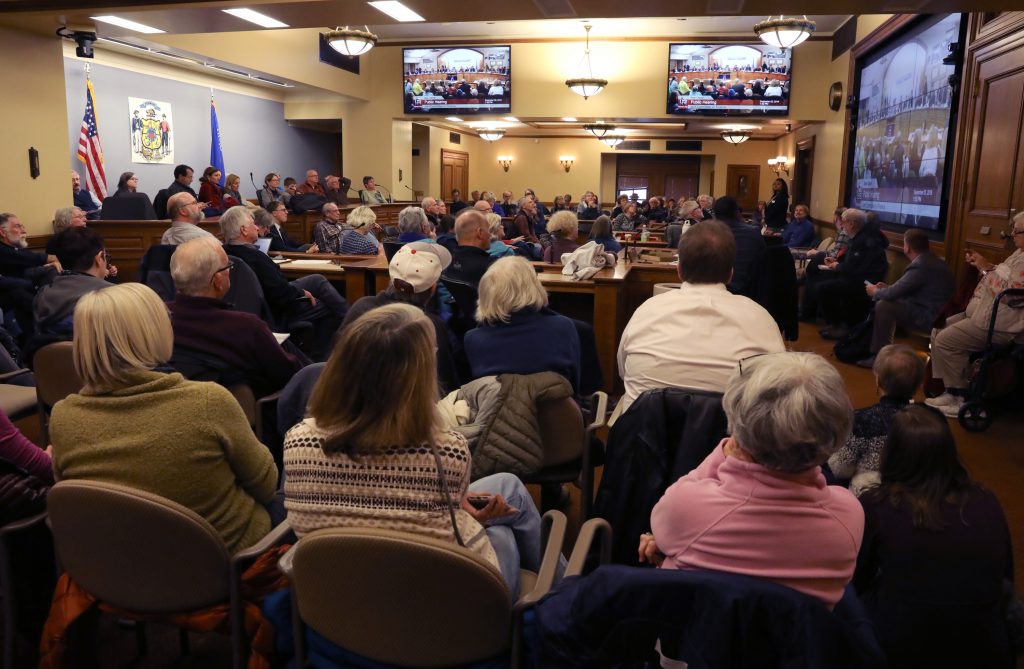 Members of the public occupy an overflow room during the Joint Finance Committee public hearing to discuss bills voted on during an extraordinary session of the Legislature on Dec. 4 and 5, 2018. Photo by Coburn Dukehart/Wisconsin Center for Investigative Journalism.

How much does it matter to the Republican leaders of the Wisconsin State Legislature what the people they are elected to represent think?

Time and again, we’ve seen, the answer is hardly at all.

Late in the day on Friday, Nov. 30, the Legislature’s GOP leaders unveiled a raft of so-called lame duck legislation. The bills sought to significantly limit the powers of the incoming Democratic administration and make it harder for people in Democratic strongholds to vote.

About 1,400 people turned out to register their opposition during the sole hearing devoted to the bills, on Monday, Dec. 3. More than one hundred people waited as long as ten hours to testify for up to two minutes each. All but one person was opposed. The bills passed easily in the Republican-controlled legislature, on mostly party-line votes.

This has happened before. In 2015, the GOP leadership set out to dismantle the Government Accountability Board (GAB), the state’s ethics and elections watchdog. Despite a strong public outcry, the bills were promptly passed and signed into law by Gov. Scott Walker.

That’s when I began documenting the gap between public opinion and legislative action, and publishing data on my website, we-the-irrelevant.org. That name is no accident. The more data I collected, the clearer it became that the voice of the people didn’t matter.

I asked GOP legislators to send me all citizen correspondence they received on a number of controversial issues. Time and again, the same pattern emerged. Regarding the GAB, campaign finance changes, and exempting themselves from John Doe investigations, roughly 95 percent of the input lawmakers received on bills they then passed was in opposition.

Among the only support I found for the bills was from Americans for Prosperity, a conservative advocacy group founded by the Koch brothers that spent $269,000 on lobbying during the 2015-16 legislative session. The group thanked lawmakers “for taking bold leadership to restore accountability in our state’s government.” Accountability to whom? To lobbyists or to the people who wrote and called? My data suggests the former.

Recently, I sent open records requests to the entire Legislature, asking for citizen correspondence regarding the three lame duck bills that passed in the early morning hours of Dec. 5, after an all-night session. The responses are beginning to come in.

Rep. Rob Stafsholt (R-New Richmond) and Rep. Ken Skowronski (R-Franklin) were among the first. Stafsholt’s email said this: “Attached is a document with all of the constituents that contacted our office opposing the extraordinary session bills. The physical emails are no longer in our files, but this is the information that remains. This open records request is now considered closed. Have a wonderful holiday season.”

The attachment lists 115 people who called and 88 who emailed. All 203 opposed the legislation. Rep. Stafsholt voted “Yes” on all three bills. The actual emails were presumably destroyed, as the law allows. (Legislators, alone among Wisconsin state and local officials, are exempt from records retention rules.)

Gov. Walker signed the legislation on Friday, Dec. 14. My request to the lawmakers arrived Monday, Dec. 17. The emails had already been trashed.

Skowronski sent phone call records and actual emails. Of these, 244 contacts were in opposition, and only two in favor. He voted “Yes” on all three bills.

Many questions remain, but I am seeing a very familiar pattern emerge: Those in power use their power to perpetuate itself. Opposition receives the legally required hearing after which, it is ignored. The people’s voice is irrelevant. That needs to change.
Sheila Plotkin, a resident of Madison, is the Founder of We the Irrelevant. This column was produced in collaboration with the Progressive Media Project, affiliated with The Progressive, a Madison-based magazine.

One thought on “Op Ed: We the Irrelevant People”