The Tandem Has Good Southern Food 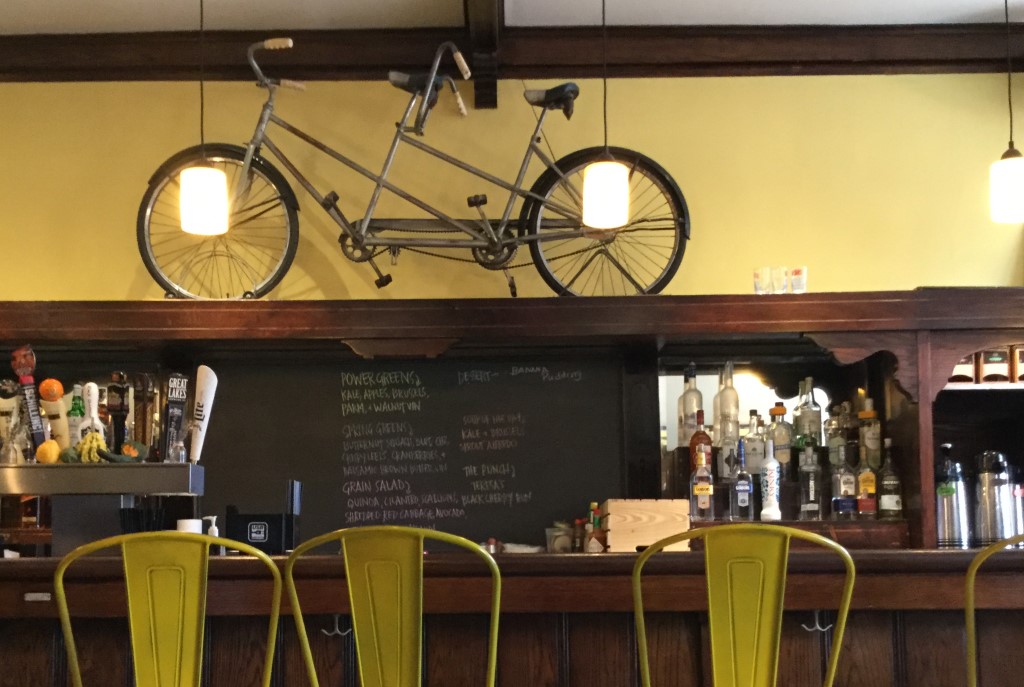 The Tandem. Photo by Cari Taylor-Carlson.

Two years ago, Caitlin Cullen opened The Tandem, in a north-side neighborhood mainly bereft of restaurants, in the Former Wally Schmidt Tavern. She took a bar that stood empty for 12 years and transformed it into a restaurant worthy of her skills as chef-owner and chief overseer, serving southern comfort food.

The Tandem, located two blocks south of North Ave. and 20th St., sits opposite Johnson Park, a large green space which almost lets diners forget they’re in the heart of the city when they sit by a window. With a location close to Downtown, the restaurant attracts business customers as well as locals.

The name, The Tandem, suggests working together, exemplified by the two-seater bike on the wall behind the bar. This former tavern also has the charm of a classic Milwaukee joint rescued from the wrecking ball with an artfully patterned original tile floor, luscious dark paneled walls, and gorgeous iron work above a back booth. A long wooden bar with bright yellow bar chairs adds a happy note to this rehabbed space. The place also lives up its name by bringing young people from the neighborhood to the restaurant to train as servers and gain experience in the kitchen.

A walk through Appetizers led companions and I to choose Buttermilk Fried Chicken Livers, Hush Puppies, Fried Okra, and Grape Jelly Meatballs. The chicken livers and the okra had just the right balance of crusty coating. A ranch dip elevated the okra. Both were deep-fried, yet not greasy. They went down easily, as did the grape jelly meatballs, a savory treat transformed by the subtle hint of sweet from the jelly. The Hush Puppies, another nod to southern cuisine, were crisp, full of corn flavor, and served with the buttery richness of maple butter, making a perfect foil to the crunch.

The Grain Salad, described on the board behind the bar, sounded boring until I tasted the mix of quinoa, red cabbage, shredded carrots, and chopped cilantro. An avocado-lime dressing upgraded the dish into a memorable salad with a piquant blend of flavors. For an additional $3.00, I found bacon, an incongruent add-on. I could have added chicken for the same price. This generous bowl of grain serves at least two, or four as a side dish.

A companion found the Carrot-Cilantro Soup bland, but the accompanying Corn Bread, slightly sweet, both light and moist, and like the hush puppies, full of corn flavor.

A nice list of sides can be added to any sandwich for an additional $2.00 if you want an alternative to the fries. Sides include: Baked Beans; Mac N Cheese; Greens; Coleslaw; and Red Beans and Rice. We ordered Potato Salad and Buttermilk Grits. The potato salad had a tart edge, as did the grits from the tangy buttermilk.

We found only winners on the Sandwich lineup. The 4oz Burger led a companion to exclaim, “I’ve never had a burger this good.” And why not: the meat came from a local farm, it had never been frozen and it was shaped by a human hand.

The Sweet Potato Burrito and the Deluxe Grilled Cheese were flawless. For the burrito, the chef stuffed a flour tortilla with chunks of roasted sweet potato, rice, beans, sour cream, cheese, and a spicy green salsa. This made a happy party in my mouth and with a side, the buttermilk grits, enough for a second meal at home.

For the Deluxe Grilled Cheese, a generous portion of grilled onion, bacon, and house-made tomato jam, garnished the cheddar cheese in a sandwich that went far beyond an ordinary grilled cheese. My companion especially appreciated the tomato jam which set off the other flavors.

Other Sandwiches include a Veggie Burger, Hot Dog (Plain, Detroit, or Chicago), Pulled Pork, BLT with Avocado, and something less traditional for vegetarians, a Beet Reuben.

I can’t speak to Tandem’s Fried Chicken, a whole chicken you can order three ways, BBQ Roasted, Georgia Fried, or Spicy Memphis Fried. The bird can be ordered solo at lunch for $20.00, or for dinner when it comes with three sides for $36.00 making a complete meal for four.

Thanks to the oversized portions, we passed on dessert, however, the Banana Pudding observed on an adjacent table looked like a mandate to return to The Tandem, where it’s all about good southern food served with a dash of soul. 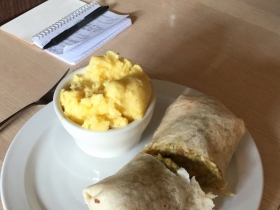 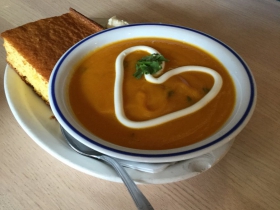 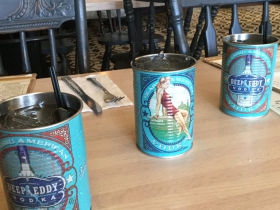 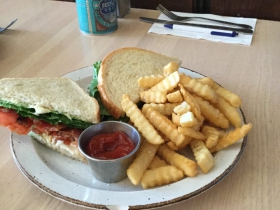 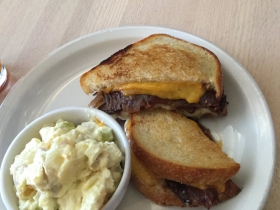 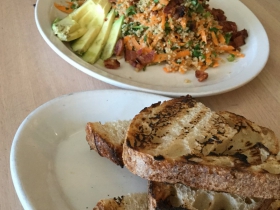 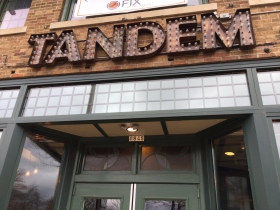 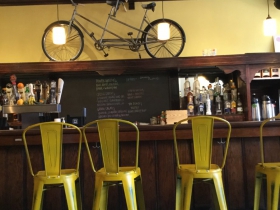 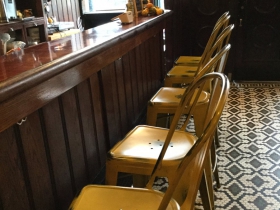