$100 million Harbor District project gets even bigger, but lower subsidy has a down side for workers. 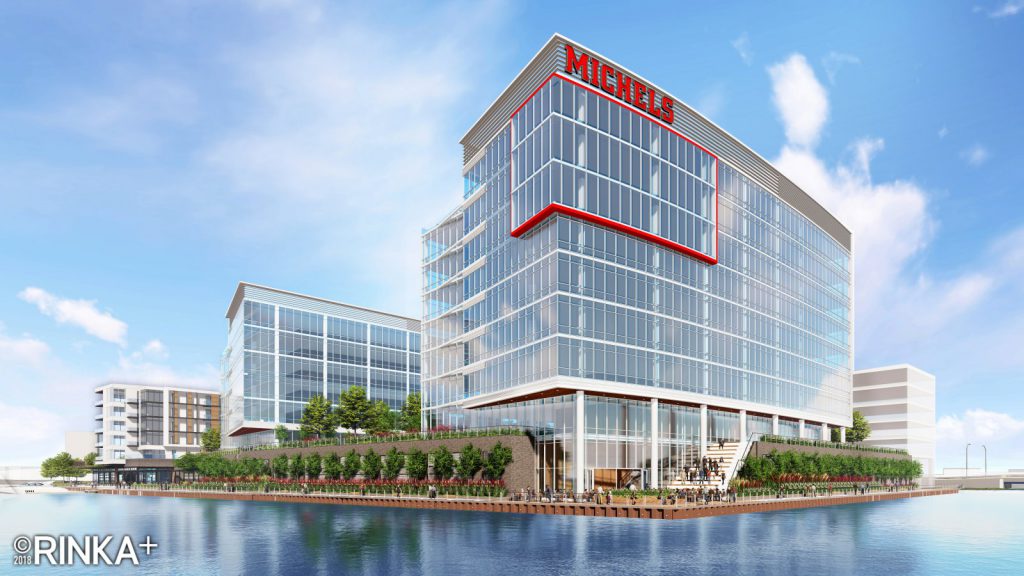 Utility contractor Michels Corp. continues to refine its vision for a $100 million corporate campus at the south end of Milwaukee’s Harbor District. The signature office tower in the five-building campus, planned for the northwest corner of the intersection of S. 1st St. and W. Becher St., has become bigger under revised plans and the company has agreed to forego its request for a $1 million city subsidy.

The company, in partnership with design partner Rinka Chung Architecture, presented updated renderings of the proposal to the Common Council’s Zoning, Neighborhoods & Development Committee Tuesday as part of a hearing on a proposed $7.1 million tax-incremental financing (TIF) district to support the development. The $49 million first phase, which would include an office building for the firm’s new infrastructure division, is planned to house 250 employees when it opens in 2020.

In exchange for forgoing the $1 million subsidy, Michels avoids the requirement that the entire project’s construction be subject to a 40 percent hiring requirement for unemployed or underemployed city residents and that 25 percent of the contracts by dollar value be assigned to city-certified, disadvantaged Small Business Enterprises. It also avoids the sometimes costly compliance costs associated with ensuring the targets are met. The hiring requirement is required on all TIF deals valued at $1 million or more under the city’s 2009 MORE ordinance.

The TIF, with the subsidy and hiring requirements, was originally approved by the city’s redevelopment authority in September. When it came before the council committee on Tuesday, neither Michels’ Chief Legal Officer David Stegeman nor any of the committee members mentioned that it changed. The financing package was unanimously passed.

Michels did not respond to a request for comment on the change, nor did council president and MORE ordinance sponsor Ashanti Hamilton. Committee member Robert Bauman in an interview with Urban Milwaukee said: “I was told Michels did the math and found its more expensive than not to take the money.” Jeff Fleming, Department of City Development spokesperson, offered this to Urban Milwaukee: “deals are negotiated and as negotiations progress the terms often change.”

The remaining $7.1 million TIF will pay for the city’s share of the new riverwalk segment ($3.4 million), environmental cleanup ($400,000), rebuilding W. Becher St. ($2.5 million) and city administrative and contingency costs ($750,000). Because Michels is only directly receiving funds for the riverwalk, only the riverwalk’s design and construction will be subject to the Residents Preference Program and SBE hiring requirements, defined in the agreement as a “best effort.”

Stegeman had indicated in late October that the company was looking to expand the size of the first building, and the new renderings do indeed show a much larger building. A number of other tweaks are visible in the design. “I would say we’ve maximized the density possible on the six acres,” said project architect Matt Rinka.

Many of the positions in the 250-employee division will be in engineering or other highly-technical fields. “People that, quite frankly, are easier to recruit in Milwaukee than other places,” said Stegeman in September. The fast-growing, privately-held firm is currently headquartered in rural Brownsville, just outside Fond du Lac. Firm vice president Tim Michels said at the August project announcement that he envisions eventually having 800 employees at the site, known as R1VER, in addition to a hotel, apartment building and office space for additional tenants.

The proposal, which still complies with the existing zoning code according to Rinka, now has a more active riverwalk, and a more unified facade along S. 1st St. the renderings show. “This should make it more pedestrian friendly and attractive than it is now,” said the architect. A restaurant planned for the northeast corner of the site now extends further along the riverwalk to the west. In addition, the two buildings along S. 1st St., envisioned as a hotel and apartment building, angle towards one another and are depicted as connecting with a top-level skywalk.

Specific details on the revised size of the first office building were not available, but Rinka told the ZND committee yesterday that the floor plates were enlarged. The TIF documents specify that the company is required at the minimum to build a 130,000-square-foot building. But back in October, Stegeman had said the building could grow in size to 180,000 to 200,000 square feet and it looks like that is what has happened; the project may have grown by at least 50,000 square feet.

The company won’t meet Stegeman’s optimistic goal of starting construction by the end of 2018, but is pushing to get shovels in the ground soon. “We’re hoping to break ground, subject to permits, within the next 60 to 90 days,” said the attorney.

Urban Milwaukee broke the news that Michels was considering a massive Milwaukee complex in May. The company has over 6,000 employees and 12,000 pieces of equipment spread across the globe. 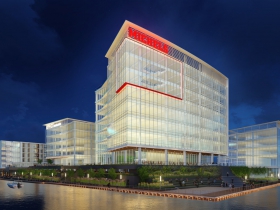