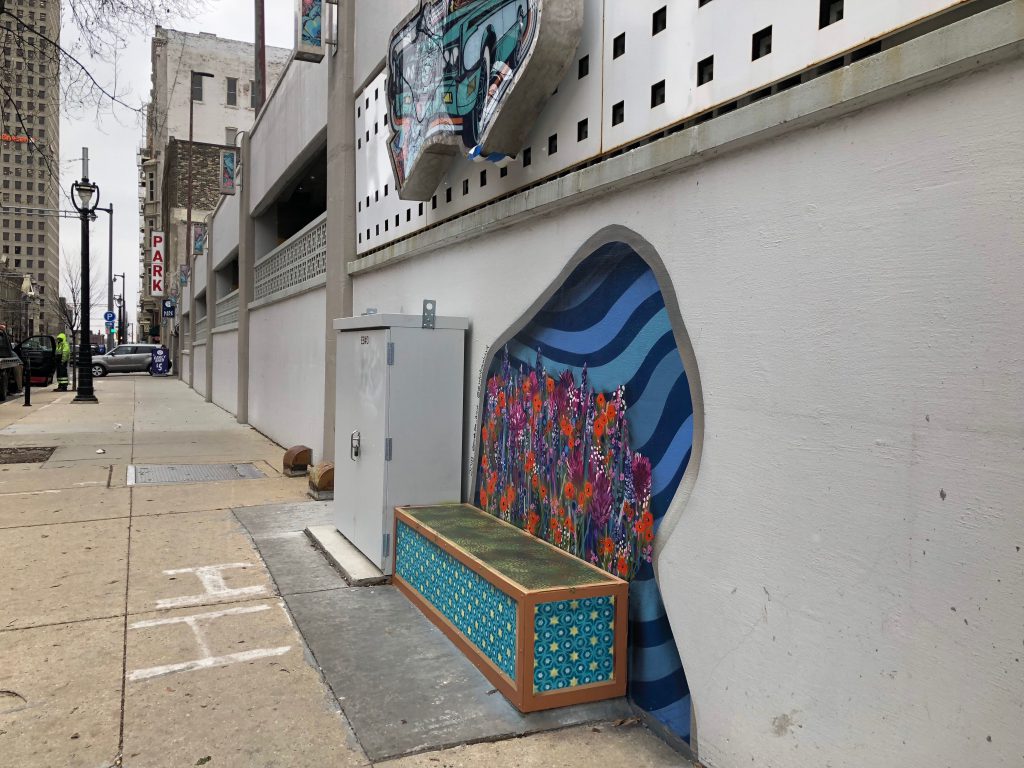 With little fanfare, non-profit Milwaukee Downtown has unveiled three new art pieces in as many weeks. Designed by local artists, two new bus shelter art installations can be found on N. Water St. near its intersection with E. Wisconsin Ave. A new mural has also been painted on a parking garage at the intersection of N. Milwaukee St. and E. Wells St.

The two new bus shelter pieces are a continuation of the Bus Art Project MKE unveiled by the Milwaukee County Transit System in early June.

The heavily-used shelter at N. Water St. and E. Wisconsin Ave. for routes 15 and 57 as well as the Green Line now features photos of Milwaukeeans from all corners of the city. Dubbed “28 ZIP Codes, 1 City,” the piece by Dominic Inouye is a continuation of the artist’s ZIP MKE program designed to capture Milwaukeeans from each of the zip codes.

An infrequently used shelter one block north at N. Water St. and E. Mason St., served only by Route 57, now features four distinct patterns dubbed “The Collide” by artist Tzeng Lee. The shelter, on a heavily trafficked street for both pedestrians and vehicles, might not get a lot of riders, but it’s at least much more visually interesting now. Sadly because of the placement of the shelters and orientation of the art, the vinyl installations are only visible from the opposite side of the street.

The most striking piece is a new mural by artists Fred Kaems and John Kowalczyk at the southwest corner of the intersection of N. Milwaukee St. and E. Wells St. The two-dimensional painted mural appears to be actually cut into the side of the building to pedestrians that are walking south on N. Milwaukee St. It’s painted on a blank spot on the side of a two-story parking garage where a control box for nearby street lights recently sat. The new box, installed in 2017, is much smaller and Milwaukee Downtown partnered with garage owner Interstate Parking to fund the whimsical art installation.

The otherwise anonymous garage, most regularly used by Milwaukee Athletic Club visitors, now features not one, but two art installations. A series of backlit cars designed by artist Reginald Baylor were installed in 2015.

How long the garage and the associated art lasts is anyone’s guess. It’s located at an increasingly prime downtown corner, across the street from a streetcar station, and just east of last week’s Friday Photos honoree BMO Tower. A small parking garage doesn’t seem the highest and best use for the property anymore.

Milwaukee Downtown, known officially as Business Improvement District #21, has invested heavily in reimaging downtown’s public infrastructure in the past two years. In October the organization unveiled an immersive mural in the N. Jefferson St. pedestrian tunnel. The year before the organization awarded artist Mauricio Ramirez a grant to repaint 10 utility boxes lining Wisconsin Ave. And most notably, for the past two years, the organization has provided staff support for Sculpture Milwaukee and the approximately 20 large sculptures that are seasonally installed on Wisconsin Avenue.

Milwaukee Downtown, which financially supported at least part of each installation, derives its revenue from an annual special assessment on commercial properties within its boundaries. 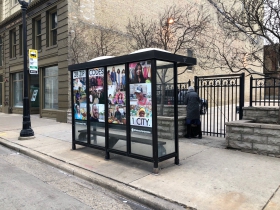 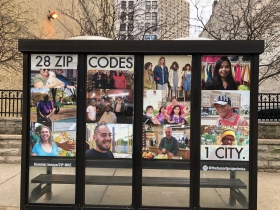 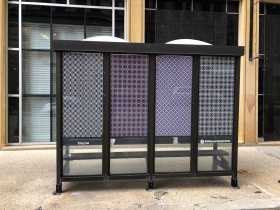 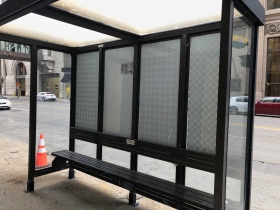 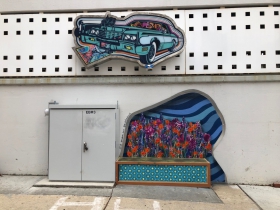 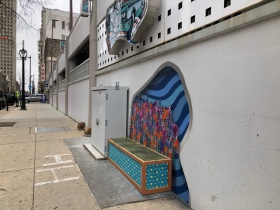