Tavo’s Is Mexican With a Twist 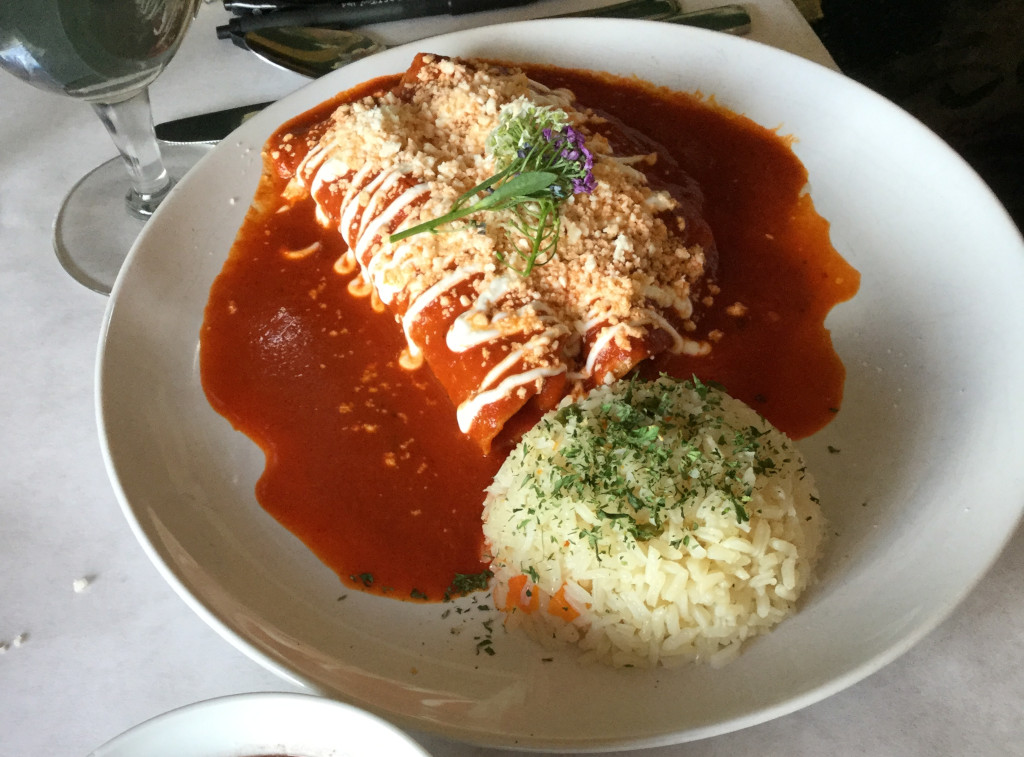 There’s not much traffic, yet, at Tavo’s Signature Cuisine, located at W. Bluemound Rd., but don’t take that as a sign the food is sub-par, because it’s not. Tavo’s is tiny, just five tables and a mini-bar, but it’s mighty when it comes to their food, a mix that includes flavors and dishes from many parts of Mexico and Latin America. 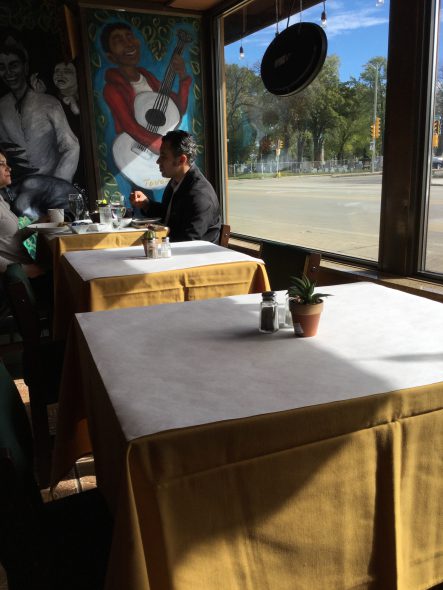 Wall murals add character, especially the large one featuring revolutionary Emiliano Zapato. If you look carefully, you will also see a portrait of Frieda Kahlo hiding behind the TV.

According to our server and co-owner Anthony Gallarday, the restaurant takes original dishes from Mexico and upscales them. He and his father, co-owner Gustavo Camacho, want to present really fresh, high quality food. For example, he told my companion and I, they are working on sourcing the best fish for fish tacos, soon to be on the menu, and it won’t be the common tilapia. Instead, he said, they will use “mahi mahi, perch, or Chilean sea bass.”

We were surprised when Anthony set a complementary bruschetta-like appetizer on our table: two slices of bread layered with basil olive oil, black beans, chopped tomato, and a sprinkle of cheese. These two unexpected bites whet our appetites for what was coming. Here’s where “Signature” from the name of the restaurant came to the table: two Enchiladas Rojas stuffed with shrimp, and topped with a flower. “It’s alyssum,” said Anthony, “and it’s edible.”  He told me to mix it with my enchiladas to intensify their flavors. I did. He was right, not that the succulent shrimp needed extra help.

My companion’s Steak Tacos were equally impressive. The chef filled them with small pieces of chewy ribeye along with chopped onions and cilantro. The meat had good flavor and there was a lot of it.

For our proteins, we chose from a list of Steak, Chicken, Pastor, Ground Beef, Shrimp, Veggie and Cactus. In addition to tacos and enchiladas on the lunch menu, they offer Chile Relleno, Sopes, Gorditas, a Burrito, and Enmoladas, chicken-stuffed corn tortillas topped with house mole.

All the meals, lunch and dinner, come with rice and black beans. The beans are worth a mention as they are not cooked with lard, making them 100 percent natural and healthy, according to Anthony. He added that vegan and gluten-free dishes are also available.

In my opinion, it’s almost de rigueur to order Horchata to accompany a Mexican meal. In this case, we found it had more robust cinnamon and sweet milk flavor than my friend and I had experienced in the past.

On my second visit, a burrito stuffed with carnitas and an enchilada filled with pastor, kept the good vibes coming. Since my prior visit, they added carnitas to the menu, an excellent addition. This treatment of pork can be dry and flavorless, but the plentiful carnitas in my oversized burrito were crisp and juicy as they should be when cooked properly. Real crema, not sour cream, added another authentic note.

As for the pastor, it had a distinctive flavor, almost like barbequed pork, very different from the carnitas, pork cooked in its own fat. Server Anthony refused to divulge any of the ingredients in the secret marinade for the pastor, saying everyone has their own recipe and that’s the reason no two pastors will taste the same. Whatever, this was a tasty variety with enough kick to make it interesting.

Dessert! That’s when our meal got exciting. You won’t see desserts on the menu, but if you ask, there’s Flan, house-made Vanilla Ice Cream, and the one we ordered, Sweet Plantains. Ripe plantains came to the table in a bowl that looked like a version of a molecajete. There was fire in the bowl, flaming brandy, which Anthony said they use to caramelize the surface of the plantains, thereby creating a caramel sauce. As soon as the fire burns itself out, don’t sit around admiring your creation as the house-made vanilla ice cream immediately begins to melt. Truly a spectacularly delicious dessert.

The menu at Tavo’s will change as it follows the seasons, but Anthony couldn’t, or wouldn’t, tell us what will be coming in the coming months. In the future, I would suggest adding a few upscale choices on their menu to more accurately reflect the “Signature Cuisine” they advertise in the restaurant’s name.

They’re off to a good start since they just opened in May 2018. I’ll return for another shot at that flaming dessert and because I want to support this tiny, yet mighty, family-run restaurant, where they serve really tasty food. 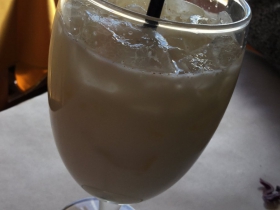 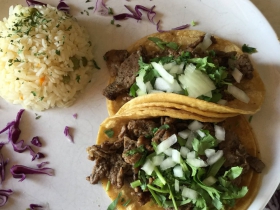 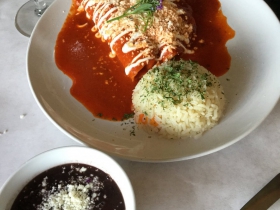 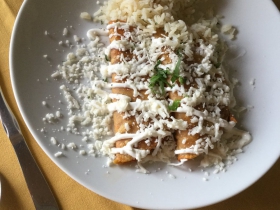 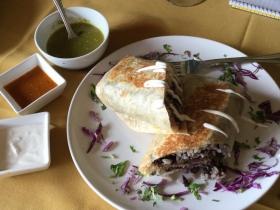 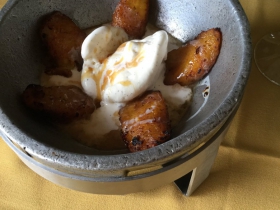 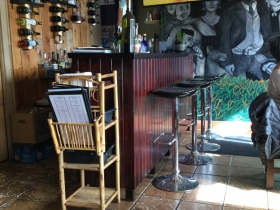 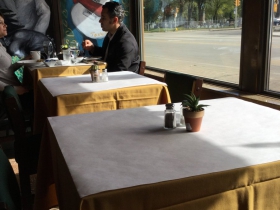