The Incoherence of Scott Walker

His suddenly changing policies make for a confused campaign.

Like Leah Vukmir, Scott Walker is underwater on his approval rating from independents, according to the Marquette Law school polling. The chart below shows the difference between the percentage of registered independents who approve of Walker minus the percentage who disapprove of him; the net number (solid green line) is minus 14 percent. It also shows the net approval rate among the smaller subset of independent voters who are both registered and likely to vote, which is minus 20 percent (dashed green line). 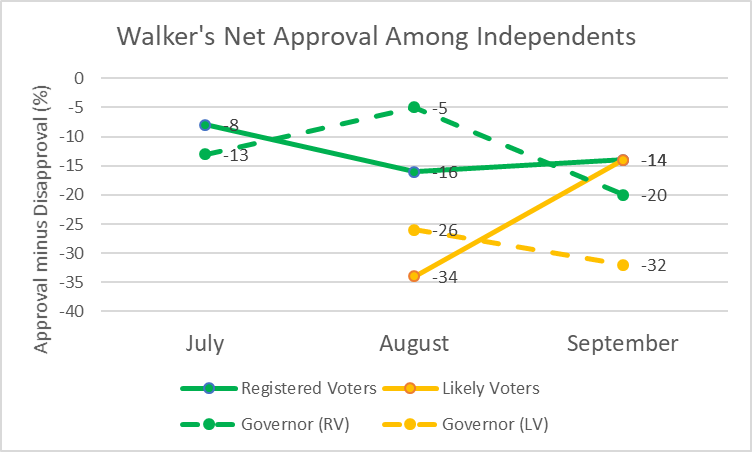 Unlike Vukmir’s approval ratings, which seemed to get worse over time and were lower among the subset of registered voters most likely to vote, in Walker’s case it is hard to discern any sort of trend. For instance, the September sample of likely voters was less disapproving of Walker than was the August sample, yet more disapproving of Walker in his role of governor. Walker’s total disapprovals continue to outnumber his approvals.

In contrast to Vukmir, who seems to make little attempt to broaden her appeal beyond her base, Walker’s campaign does appear concerned about the negative views among independents and is trying to counteract it. One manifestation is his rebranding himself as the “Education governor.”

This tack is reflected in some of the headlines on the Walker ads that pop up on websites: “Put more money into education.” This sudden generosity to education is a bit ironic, since one of his first acts as governor was to cut aid to schools in his 2011-13 budget, as shown below. 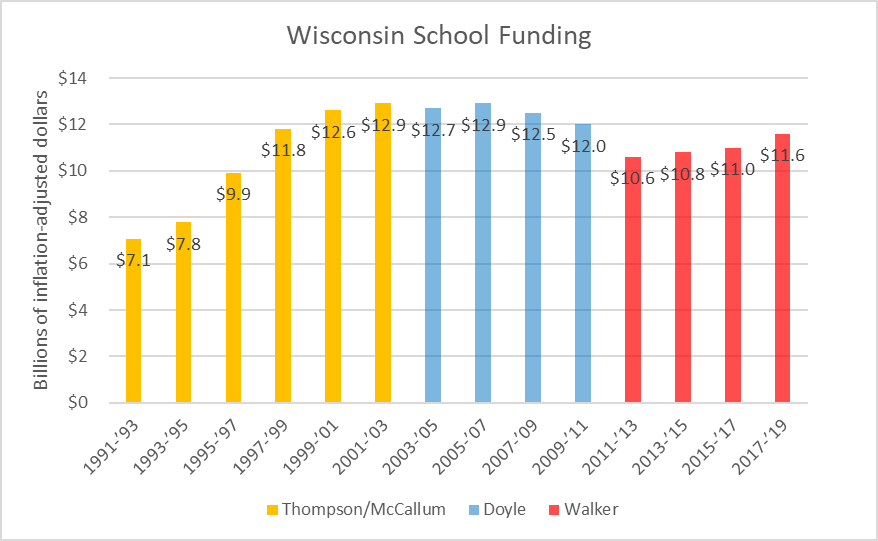 With typical Walker hyperbole, the Friends of Walker website describes his proposed 2017-19 budget as “more actual dollars than ever before.” But “actual dollars” doesn’t take into account inflation; when you do his proposal is less than those from the early part of this century. Even at the height of the recession, Doyle was able to find more funds for education in his last year than Walker did in his first.

The Friends of Walker website brags about the condition of education in Wisconsin: “Wisconsin is in the Top 10 for high school graduation rates and ACT scores … .” This is a somewhat puzzling boast since it seems to redound to the credit of the person responsible for Wisconsin education, Tony Evers, who just happens to be Walker’s challenger for governor.

A compelling case could be made, I think, that Wisconsin public education has stood pat, while other states have worked hard to catch up and, in some cases, to pass us—as judged by educational outcomes. But Walker doesn’t make it.

Rather than argue for educational reforms, Walker and his supporters put most of their energy into attacking Evers over a triviality: for not overriding an arbitrator and courts to take away the license of the teacher who made the mistake of viewing pornography in his school’s lunch room. If nothing else, this obsession strikes me as reflecting a disturbing lack of respect for due process.

Walker’s involvement with education over the last eight years has been hit and miss. He announces initiatives but doesn’t follow through. He first backed the Common Core Curriculum, but then, pandering to the Tea Party faction, announced that Wisconsin would replace the Common Core with something made of Wisconsin. That never happened. (There are echoes here of Trump’s promise to replace the Affordable Care Act (ACA) with something “better and less expensive.”

Early in his administration Walker pulled together a diverse group (“Wisconsin Read to Lead”) aimed at making sure children were able to read competently by third grade, an admirable enterprise but one that has been left to drift without leadership. Alan Borsuk’s series of columns on that initiative makes for depressing reading.

Expanding the availability of health insurance is another example of how acceding to the demands of the Republican base (including the donor class) conflicts with appealing to independents. Walker approved Attorney General Brad Schimel’s request to co-lead with Texas a court challenge to the continued existence of the Affordable Care Act.

As described in an earlier column Schimel asks a judge to (1) end the ACA’s ban on discrimination based on pre-existing conditions and (2) declare the whole ACA unconstitutional. The Schimel lawsuit, even in the likely event it is thrown out, has the effect of increasing uncertainty and thus inducing insurers to raise their rates.

Yet at the same time Walker supports a reinsurance plan that would limit the risk to insurers facing high-cost cases. Reinsurance aims at reducing the insurers’ risk and thus hold down prices. Walker is simultaneously pursuing policies to tear down the ACA and reinforce it.

The core of Walker’s political success has long been his claims to positively impact the Wisconsin economy. He took office shortly after the economy hit bottom. In words of his campaign website:

During the four years before we took office, Wisconsin was headed backward with the loss of 133,000 jobs and an unemployment rate that peaked at 9.3 percent.

He then takes credit for the subsequent recovery. In the words of a Walker tweet, “Our bold reforms have Wisconsin’s unemployment rate down to an all-time LOW of 2.9 percent, and the number of people working at an all-time HIGH!”

The problem is that most other states—and many other countries—followed the same pattern. Walker never addresses the challenge of separating the effect of his policies from that of the recovery of the global economy.

In an earlier column, I addressed this problem. I found that in the period between 1990 and 2011, the job numbers from six of Wisconsin’s neighboring states could be used to accurately estimate the number of jobs in Wisconsin. Yet after Walker took office, the model broke down, overestimating the number of Wisconsin jobs created by about 70 to 80 thousand.

The graph below shows jobs in this state grew as predicted until Walker took office and then gradually began to fall short, resulting in a jobs gap of 70,000 to 80,000. Something changed when Walker became governor. 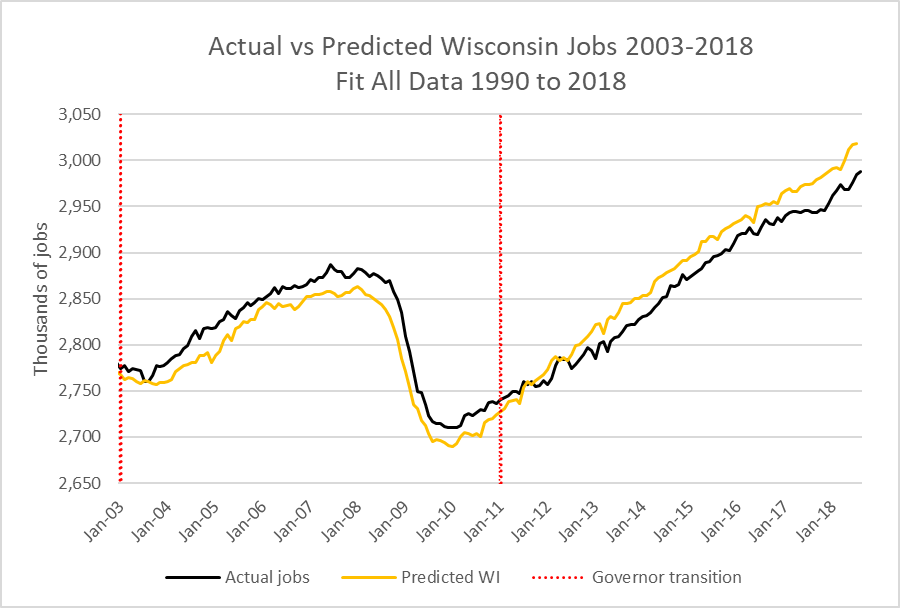 To get at a possible explanation I looked at another measure that has been reported monthly since 1990: the Wisconsin labor force. The labor force is calculated from a survey of households. People are counted if they are working or are looking for work. 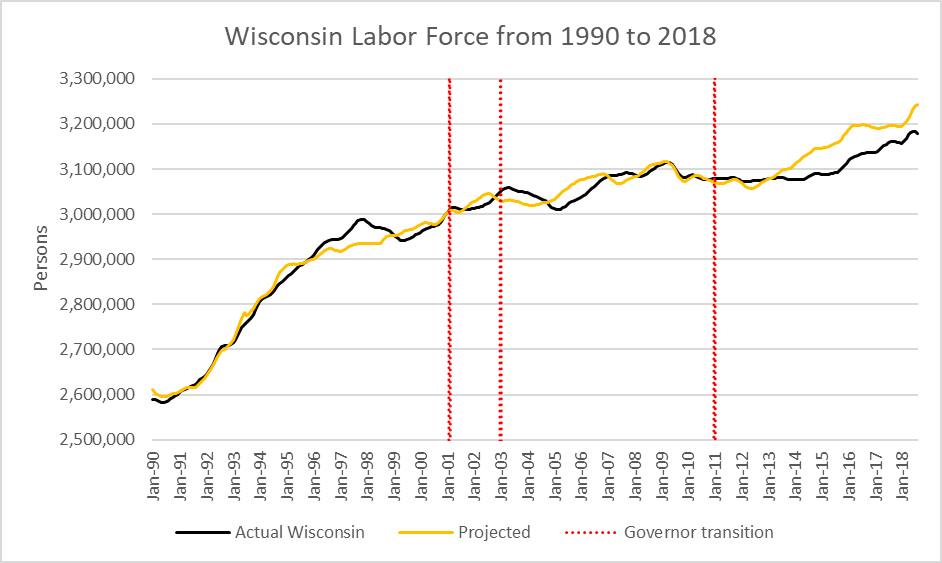 The answer, I believe, lies in the Walker administration’s neglect of—and disdain for–public goods, whether public education, a strong safety net, environmental protection, a robust transportation system, or expanded well-maintained parks. Public goods, like any goods, have both costs and benefits. The challenge is to make sure that the benefits exceed the costs. In practice it is usually much easier to quantify costs than benefits.

In recent years, the preferred solution for Republicans is to assume benefits from government programs is zero. That assumption is increasingly dominant on the right. For example, ALEC rates states entirely on the cost, not the benefits, of their public goods—giving extra weight to the cost for rich people. This neglect leads to bad decision meeting.

The graph above shows that in recent years Wisconsin’s labor force has grown less than what would be expected based on labor force growth in neighboring states, perhaps because workers are moving to other states.  This is consistent with both Wisconsin’s abnormally low unemployment rate and the increasing complaints from businesses that they cannot find employees. The result is a more stagnant economy with less job growth than neighboring states.

In his attempt to appeal to the Republican base, Walker hasn’t been able to deliver the kind of job growth he promised. And in his recent change in policies to appeal to independents, he runs the risk of pushing incoherent policies.

3 thoughts on “Data Wonk: The Incoherence of Scott Walker”