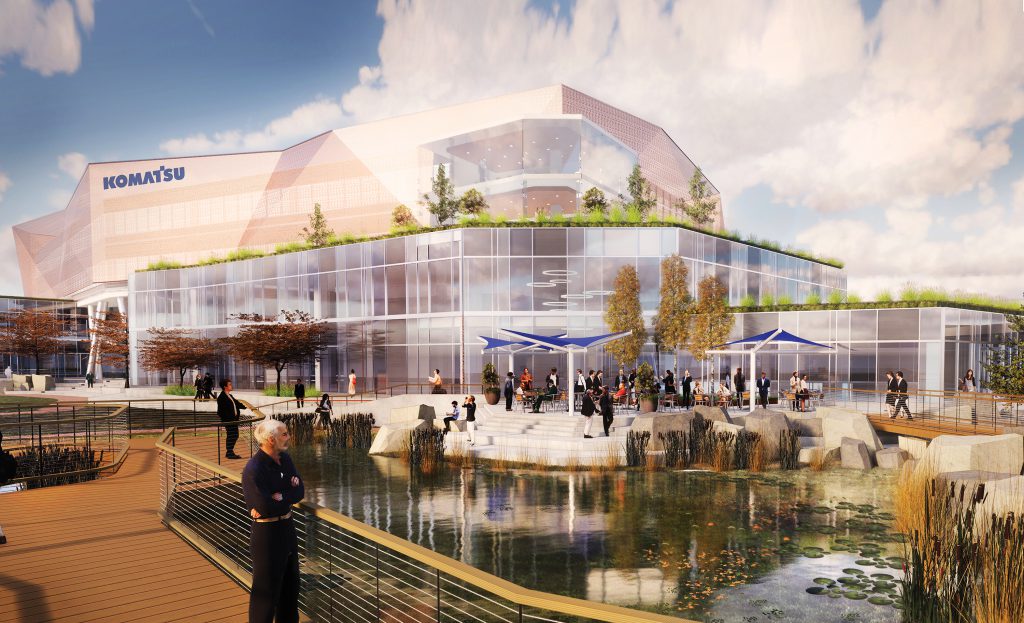 One of Milwaukee’s legacy indistrial giants is coming home.

Komatsu Mining, the successor firm to P&H, will move its mining equipment manufacturing campus from suburban West Milwaukee to the Harbor District. P&H was founded in the city’s Walker’s Point neighborhood in 1884.

The $285 million campus will initially be home to at least 650 current company employees, but Komatsu plans to add at least 400 more to what it calls the South Harbor Campus.

”The new campus provides us opportunity for advancement in state-of-the-art facilities that expand our capabilities on a global scale,” said Komatsu Mining CEO Jeff Dawes.

The campus will include advanced machine, heat treatment and fabrication shops, research and development laboratories, a training and conference center, office building, museum and gift shop.

Compared to the West Milwaukee campus, the new facility is expected to use 75 percent less electricity and 80 percent less water.

The state will provide $59.5 million in tax credits, tied to the creation of new jobs and other performance metrics. The city, leveraging incremental property tax revenue from the 59-acre site, will invest $15 million in a lengthy new riverwalk segment and award up to $25 million to the company for job creation.

The site is formed by the combination of the 46-acre Solvay Coke site, now owned by We Energies, and a 13-acre, city-owned site long used for coal storage. A substantial amount of water frontage is included along the Inner Harbor and Kinnickinnic River.

We Energies is currently leading an environmental cleanup of its site through its Wisconsin Gas affiliate. CEO Gale Klappa said that the company expects to sell its land for approximately $7 million, recouping its costs from cleaning up the site used for gas manufacturing by a predecessor firm. The city will sell its site for a prorated amount based on the sale price of the We Energies site.

Komatsu, which acquired Joy Global and P&H in 2016, has been searching for replacement sites for the West Milwaukee campus. Mayor Tom Barrett stated: “the concern we always have with a new buyer is what’s going to happen next.”

But the result appears to be a win for Milwaukee, and maybe for Wisconsin.

Governor Scott Walker, the only speaker to not wear a suit, is pleased with the outcome. Ticking off a list of things happening in Milwaukee, Walker referenced the state’s motto (“Forward”) and declared “with all the dynamic things happening here, we are certainly moving forward.” He said the tax credits will be entirely tied to performance-based metrics. The governor, caught in a tightly contested reelection battle, also expressed support for the $150 million in business Komatsu does annually with Wisconsin suppliers.

The city’s financing is substantially more complex. The city will create a large Tax-Incremental Financing (TIF) district, that includes $15 million in bonding for the new riverwalk segment. An additional $13 million to $25 million will be awarded to Komatsu over the 25-year life of the TIF district should the company maintain between 946 and 1,300 employees at the campus.

Department of City Development Commissioner Rocky Marcoux is pleased with the deal, saying it was a very competitive process. “One of the most challenged sites in our city, it is worth the investment,” said Marcoux in an interview.

The company has not announced long-term plans for the West Milwaukee site located along W. National Ave.