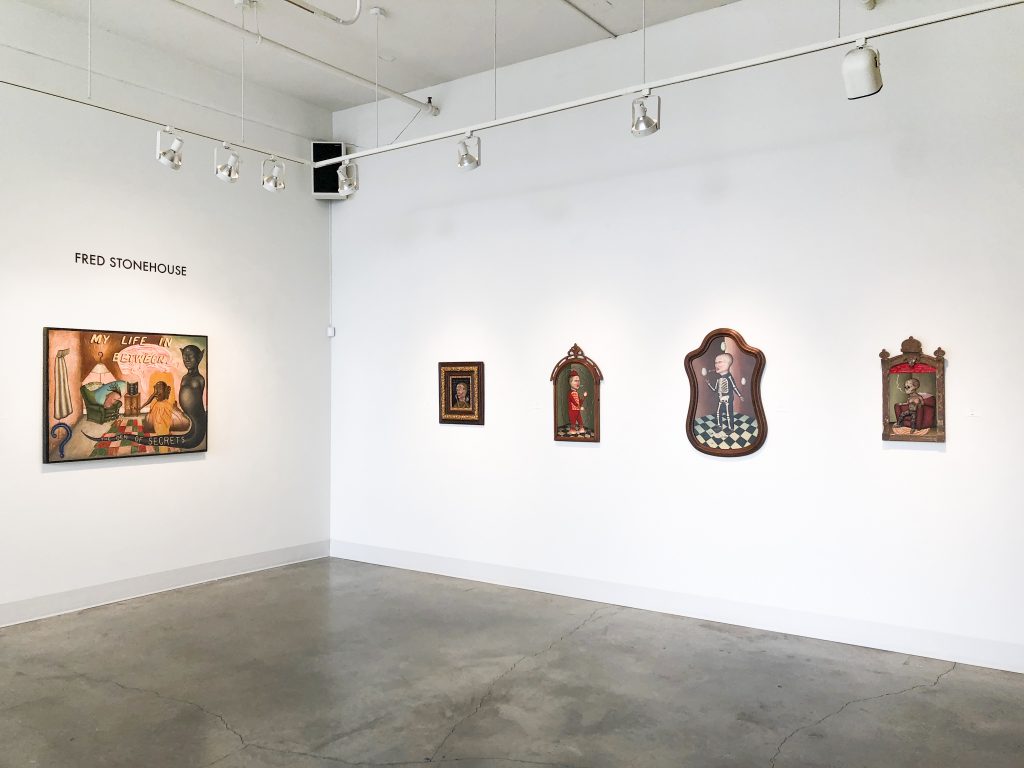 In “Night Vision,” running through October 13 at Tory Folliard Gallery, Stonehouse invites viewers into his fragmented, bizarre, dream-like worlds. Creatures that are half-human (the human and half-human creatures represent Stonehouse himself) and half-beast are set against black backgrounds; a nocturnal forest houses fantastical creatures.

The artist’s affinity for nature and animals, especially deer, is evident in “Blood Buck,” (graphite and colored pencil on paper) a drawing of the head of a deer with drops of blood dripping down its face, “Night King” (48 inches x 72 inches acrylic on canvas), in which the animal appears much larger than the other creatures in the painting, and “Night Flight” (acrylic on panel with an antique frame, 17 ½ x 15 ½ inches), which portrays a deer head and a large bee.

A number of the exhibit’s works are paintings on wood panel, set in vintage frames that Stonehouse carefully selected from antique shops and flea markets. Acrylic paint is his main medium, although several graphite and colored pencil drawings in plain white frames are displayed. Carefully-applied layers give the artists’ paintings a varnished appearance, reminiscent of Old Masters paintings (Stonehouse is particularly attuned to Renaissance painters).

The narratives incorporated in a number of Stonehouse’s paintings appear to have a hidden meaning, open to audience interpretation. To the artist, who grew up with a mother who was deaf, a picture is truly worth a thousand words.

In “Jesus Crust,” for example (flashe, a type of acrylic paint, on paper, 10 x 8 inches) words printed in white against a black background read: “Every morning was a miracle, every night was a death, in between was always lost.” The unshaved figure wears a multi-striped beach ball on his head. Words to the right of his lips read “When?”

Much of the Stonehouse’s works, including “Den of Secrets” (36 x 48, acrylic on canvas) and “Better Self” (acrylic on panel with an antique frame, 18 ½ x 15 ½ inches framed) could be perceived as studies in human psychology and phrenology. In “Den of Secrets,” a windowless room with tan walls (possibly a basement apartment), half of a head rests on a green easy chair, leaning towards an open book with a question mark of the cover on top of an end table, while an armless black vampirical creature with a long, prehistoric tail stands on the right side of the room. Perhaps Stonehouse is exploring his subconscious and inner demons.

“Better Self” depicts the bust of a man with an opaque skull for an upper torso (a symbol which echoes Mexican folk art and artists like Frida Kahlo and figures in a handful of Stonehouse’s works). The character’s brain is divided into different colored segments corresponding to emotions and experiences: joy, anger, sadness, hope, despair, love, and luck.

The artist’s use of recurring symbols provides some clues to the meaning of his works. Speckled eggs, representing new life and the birth of fresh ideas, are present in some of his paintings. In “Night King,” “Thief” (28 ½ x 20 ½ inches framed) and “Messages,” human or animal figures hold on to large and small eggs as if they were good-luck charms or oracles predicting the future.

“He’s a mystery to all of us. He loves to create that ambiguity,” said gallery owner Tory Folliard of Stonehouse, whom she has been representing for nearly two decades.

Although there is a palpable uneasiness to much of the Stonehouse works (“a sadness and tenderness,” said Folliard) the artist’s absurdist humor surfaces in works like “Summer Sounds.”

The painting depicts a half-human, half-batlike creature gripping a bottle of beer, beads of sweat dripping down his face, a trail of sausage links starting at its mouth and wrapped around its body.

As Stonehouse is a West Allis native, this could be a gentle poke at the city’s love of brew and bratwurst.

“Cheap Shot” features a deer-like head on a shirtless human torso, dressed in basketball shorts and sneakers, the Stonehouse figure (this time, as a devilish creature with red skin and horns, also dressed in casual clothes and basketball sneakers) sitting on his knee and holding a beach ball. The latter is a symbol inspired by the influential American surrealist painter John Wilde, who used the colorful spheres in his works “Jane and Joan Enter The Kingdom of Heaven” and “Jane and Joan Enter the Kingdom of Heaven II” (2002).

Is this painting a commentary on the Milwaukee Bucks? Fear the deer — or maybe embrace it?

Stonehouse’s personality seems to belie his art. A UW-Milwaukee graduate with a Bachelor of Fine Arts, the artist teaches drawing and painting at the UW-Madison, and is a good mentor to his students, said Folliard.

“He has a big presence. Everyone gravitates towards him. He’s so lively and friendly,” said Folliard gallery assistant director Rebecca Sidman.

One thing is for certain: Stonehouse likes to keep his audiences guessing. Although there is no right or wrong answer to how to read his work, it’s a fascinating puzzle to try and solve. 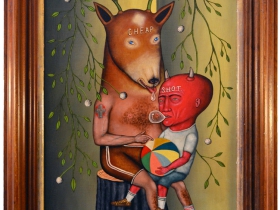 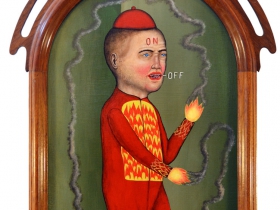 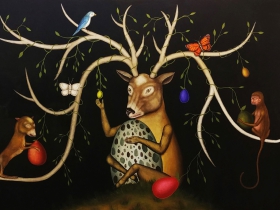 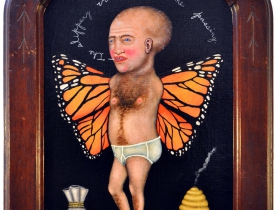 “Night Vision,” through October 13 at the Tory Folliard Gallery, 233 N. Milwaukee St. The gallery with host an artist’s reception for Stonehouse Friday, Sept. 21 from 5-8 p.m., with an artist’s talk at 7 p.m.