Proposal to bring hundreds of jobs to Harbor District to get financing help. 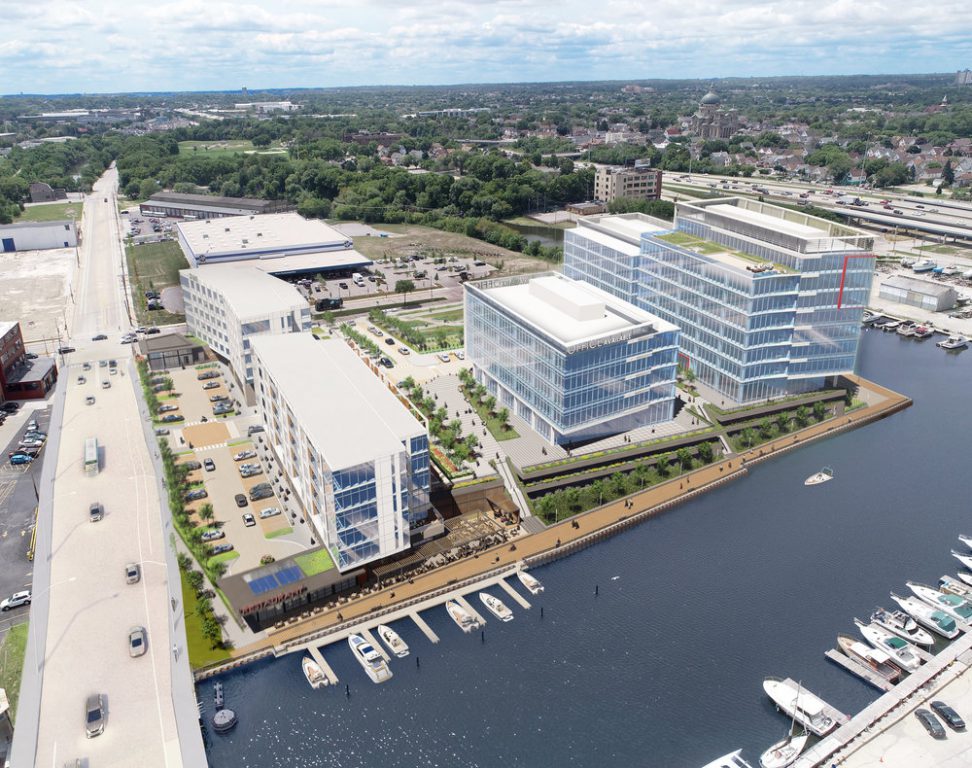 The $100 million, multi-phase development planned for the north end of Bay View by Michels Corp., an infrastructure and utility contractor, may receive $7.8 million in city financing.

Tom Daykin reported the Department of City Development has a proposal for a tax incremental financing district that will go before the Redevelopment Authority of the City of Milwaukee in September. The city funds would be directed towards constructing a riverwalk and environmental cleanup with an additional $1 million grant for job creation.

A developer-financed portion of the district, where the developer fronts the cash and is repaid through future property taxes on the city, would assist in financing the parking structure and first office building, Sean Ryan reported.

The multi-phase development, dubbed River 1, has plans for offices, apartments, a hotel and commercial space. It represents a $100 million investment for the company. A $49 million first phase is planned to open in 2020.

With the TIF in play for the first phase of the project, this gives the city a lever to guarantee that Milwaukee residents will be involved in the construction of the project. Through the city’s Resident Preference Program unemployed and underemployed city residents will work a significant portion of the hours worked on this project.

It was reported widely this week in local media, as well as in a Twitter thread by building owner Matt Garrison, that Garrison’s firm R2 sent a notice of eviction to the federal agency citing its failure to make repairs to the property.

Garrison tweeted that R2 Companies has been waiting for five months to hear a response from USPS. He told Tom Daykin that they repeatedly attempted to resolve this amicably.

In 2016, R2 released renderings for a $100 million redevelopment of the site featuring space for retail, offices, a grocery and bars. USPS has exercised an option in its lease to stay at the facility until 2025 though, putting Garrison’s plans on hold.

Garrison told Sean Ryan in March: “We want to develop the site now, but we will get paid to wait for at least the next seven years, maybe longer.”

Garrison said they filed the eviction notice five months ago, one month after the postal service renewed the lease. As Ryan reported, USPS can continually renew the lease until 2040.

As Corrinne Hess reported in BizTimes, Garrison moved forward with the eviction citing some moss, bird droppings and needed maintenance on a ceiling, a floor and a ramp, the extent of which is not clear.

Evictions based upon property conditions are unusual, rare, and difficult to prove. The dispute is headed for Milwaukee County Small Claims Court in October. And legal experts Hess quoted don’t paint a rosy picture for Garrison’s chances of prevailing in court.

Wangard Pulls Out of Project in Park East

Wangard Partners will no longer develop a large Park East parcel, and now the county, which owns the land, is re-issuing a request for proposals for the site. Wangard had previously agreed to purchase the 2.1-acre site for $2.4 million.

At 320 E. Ogden Ave. Wangard had planned a mixed-use development valued at $52 million. And as Corrinne Hess reported in BizTimes, that project has been scrapped. Stewart Wangard told Hess that his firm will instead focus on some of their other projects. But one of those won’t be the adjacent second phase of the Avenir apartments. The company has also listed that project, with one apartment building and two future phases, for sale, citing the desire of a partner to liquidate.