Bucks Will Play in Fiserv Forum 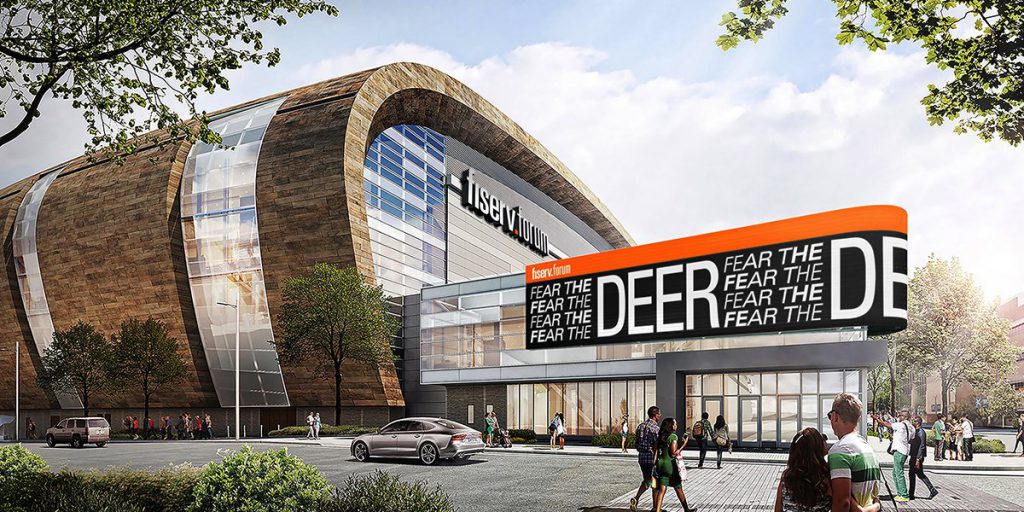 After the company denied it twice to Urban Milwaukee, news broke Thursday afternoon that the arena will be known as the Fiserv Forum.

“We are not the naming rights sponsor,” Fiserv vice president of corporate communications Britt Zarling told Urban Milwaukee on May 31st. Apparently what they left out was “yet.”

A Sports Business Daily report said the company was negotiating a $6 million annual deal lasting 20 years. The deal announced Thursday is for 25 years. Financial terms were not disclosed.

The company had previously denied they were involved in late April when I contacted them as speculation was peaking on internet message boards. It had been discovered that FiservArena.com and FiservCenter.com were both registered in January. Interest was further heightened when commenters started to connect the dots between the Bucks desire for an office tenant in the Deer District development and Fiserv’s search for a new site for its headquarters that has been delayed for months.

Fiserv certainly has the cash to buy the naming rights. The company reported $1.246 billion in net income in 2017. Fiserv is publicly traded on the NASDAQ stock exchange, with a market cap of $31 billion, and has approximately 24,000 employees spread across the globe, with about 900 working at its Brookfield headquarters.

Fiserv has not committed to a location for its new headquarters yet. The last report from the company was that it was evaluating sites in The Corridor in Brookfield, the UW-Milwaukee Innovation Campus in Wauwatosa and the Reed Street Yards in Milwaukee for its corporate headquarters, as well as sites outside of Wisconsin. It previously ruled out a possible site in Schlitz Park. Potential sites outside of Milwaukee include Alpharetta, Georgia where the company has approximately 1,600 employees.

But CEO Jeffery Yabuki said the search is focused “primarily within the Milwaukee area” at the company’s May 2017 shareholder meeting. An indicator that Fiserv might stay here emerged two months before that: in March Todd Horvath, president of the company’s bank solutions division, purchased a $1.4 million home on N. Lake Dr. in Milwaukee.

The company has not provided an update on the headquarters search for some months.

The state has become involved in attempting to keep Fiserv in Wisconsin. Included in the state’s Foxconn financing package is $10 million in tax credits for Fiserv if it maintains 93 percent of its employees and the corporate headquarters in the state. An additional $2.5 million could come from the Wisconsin Economic Development Corporation for capital costs and the selected municipality for the corporate headquarters is likely to contribute additional funds via tax-incremental financing.

The new arena, funded with $250 million in public support, is scheduled to open on August 26th and besides being the Bucks’ home, will book entertainment. The team announced Thursday morning that rock band The Killers would play the opening show at the arena on September 4th.

11 thoughts on “Eyes on Milwaukee: Bucks Will Play in Fiserv Forum”