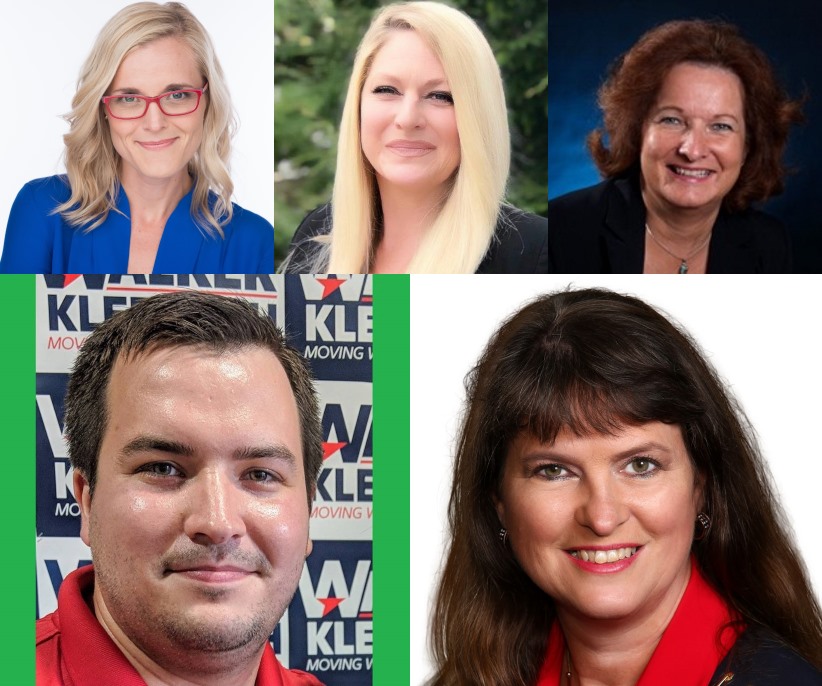 The Office of the State Treasurer has only one employee – the treasurer – who works in a basement office in the Capitol. A sign – “open” or “closed” – could be posted on the door.

The office has lost so many responsibilities over 30 years that the current treasurer, Republican Matt Adamczyk, worked to abolish it and is running for the Assembly. In April, however, voters overwhelmingly refused to amend the state Constitution to abolish the job.

So It’s surprising that such an inconsequential job, which pays about $70,000 a year, has attracted so much energy, campaign spending and drama.

Three Democrats and two Republicans want the job. Winners of the August 14 primary will face off in the Nov. 6 general election, when the name of Constitution Party candidate Andrew Zuelke will also be on the ballot.

*Sarah Godlewski, an energetic financial adviser who moved to Madison from Eau Claire, calls herself a “financial expert.” She and former Republican State Treasurer Jack Voight led a campaign to keep the office.

Godlewski wants the job so badly that, according to campaign-finance records, her husband loaned her campaign $150,000. And Godlewski’s campaign began running an upbeat Madison-market TV ad – something that never happens in campaigns for state treasurer.

“In Wisconsin, we saved this office to double check the Legislature and make sure companies like Foxconn hold up their end of the bargain,” Godlewski says in the ad.

Republicans have controlled state spending since 2011, and Republican Gov. Scott Walker pushed the Legislature to give Foxconn a huge subsidy to build a plant in Racine County.

If she can’t get some of the old functions of the Treasurer’s office returned, Godlewski said she would use the office as a “bully pulpit” to call attention to practices that cheat consumers.

*Cynthia Kaump, of Madison, is a former top aide in the Treasurer’s Office and former TV journalist. She summarizes her accomplishments in the office this way: “Kaump built a series of new revenue-generating and community-facing programs while the office set state and national records for the performance of those programs. Many involved better financially positioning children and women of color in Wisconsin.”

*Dawn Marie Sass, of Belleville, wants her old job back; she was state treasurer from 2007 until 2010, when she lost a bid for re-election. Sass’s pitch: I’m the only one running who has done the job, and done it well.

There’s also drama on the Republican side of the Aug. 14 primary.

One of the two GOP candidates, Travis Hartwig, of Oak Creek, said he lost his job because he refused to end his campaign.

In June, Hartwig told reporters he had a $62,500-a-year job as a mutual fund administrator for U.S. Bank until he was told to end his campaign or be fired. Hartwig said bank executives had conflict-of-interest fears, which were unfounded, if he was treasurer.

Hartwig also champions his Pro-Life Wisconsin endorsement on his campaign Website: “I promise to stand by organizations like Pro-Life Wisconsin and protect each and every innocent human life, in every way that I can. We need elected leaders in all levels of government that are dedicated to protecting the sanctity of life.”

Never mind that the state treasurer plays no role in women’s health policy.

It’s also ironic that Hartwig voted to abolish the office he is seeking.

Hartwig’s opponent in the Republican primary, Jill Millies, of Big Bend, is also making her first bid for state elected office. She has managed floral shops.

If elected, Millies said she would ask legislative leaders to have her office perform audits, now done by the Legislative Audit Bureau. To conduct audits, Millies would either have to hire office staffers or consultants.

Millies also promised to sell land owned or managed by the Board of Commissioners of Public Lands. The treasurer is one of thee part-time commissioners.

“I will vote to reduce the 77,000 acres of land [the Board] currently owns and manages,” Millies said on her campaign Website. “I see no reason why private individuals and business can’t own and manage this land just as well.”

Yes, voters will definitely have choices in this race.

Steven Walters is a senior producer for the nonprofit public affairs channel WisconsinEye. Contact him at stevenscotwalters.com

2 thoughts on “The State of Politics: State Treasurer Race Heating Up”