As parties flip-flop on free trade, can Wisconsin’s export economy be protected?

For a middle size state, Wisconsin and it employers have borne a remarkable portion of the brunt of President Donald Trump’s war against America’s trading partners. Partly this reflects the targets of Trump’s tweets–Canada, the European Union, Mexico, and China— which account for two-thirds of Wisconsin exports, as shown below, based on 2015 data from the US Census Bureau. 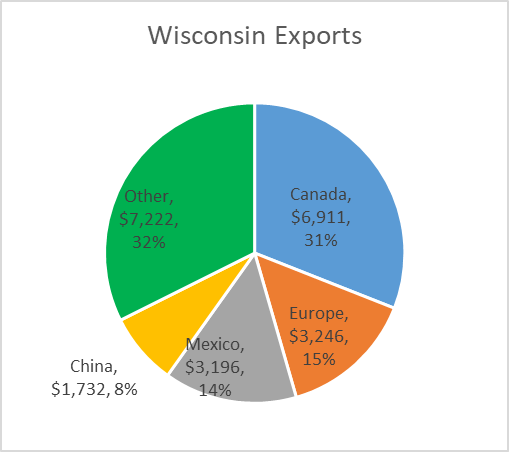 Because of the importance to Wisconsin of these countries, Wisconsin jobs are at risk. As these countries look for ways to strike back at Trump’s tariffs, it’s not surprising if their targets are products from Wisconsin.

Trump’s strategy was problematic for Wisconsin right from the start. A tariff on imports of steel and aluminum, taking a page from the unsuccessful George W. Bush steel tariffs imposed in 2002, will inevitably cost far more Wisconsin jobs than it saved even in the absence of retaliation by America’s trading partners. That’s because there are many more jobs in Wisconsin that depend on using steel than on making it.

According to the American Iron and Steel Institute, there are four steel facilities in Wisconsin employing less than 2,000 people. By contrast, Wisconsin makers of products like lawn mowers, small engines and outboard motors face higher materials costs. Harley-Davidson reported that tariffs on imported steel and aluminum will raise its manufacturing costs by $20 million this year. While these companies’ cost of materials will rise, their foreign competitors, by importing steel in the form of finished products, avoid the tariffs.

Another factor helping make Wisconsin a battlefield likely results from the trading partners’ analysis of American politics. It is no secret that Wisconsin was one of three states whose flip in the 2016 election gave Trump an electoral college majority. In addition, both Governor Scott Walker and House Speaker Paul Ryan have established themselves as major Trump allies. If one was looking for a strategy to pressure the president, targeting Wisconsin industries (including cheese and farm products, which have also been hit with tariffs by the Europeans and Canadians) makes more sense than, say, targeting products made in California, a state Trump treats with disdain.

Finally, there is the case of Harley-Davidson, an early victim of Trump’s trade war. After it was hit with higher costs because of the tariff on imported steel and aluminum, the company made two other business decisions that drew Trump’s ire.

The first was to build a plant in Thailand as reported by Bloomberg:

Harley-Davidson Inc.’s chief executive officer said he decided to build a plant in Thailand when it was clear the U.S. would abandon the Trans-Pacific Partnership, the free-trade agreement President Donald Trump withdrew from last year.

The second came as a response to the EU’s tariffs. Harley submitted a “Regulation FD Disclosure” to the SEC which said (in part):

The European Union has enacted tariffs on various U.S.-manufactured products, including Harley-Davidson motorcycles. These tariffs, … were imposed in response to the tariffs the U.S. imposed on steel and aluminum exported from the EU to the U.S. … Harley-Davidson expects these tariffs will result in an incremental cost of approximately $2,200 per average motorcycle exported from the U.S. to the EU. … In the near-term, the company will bear the significant impact resulting from these tariffs, … On a full-year basis, the company estimates the aggregate annual impact due to the EU tariffs to be approximately $90 to $100 million. To address the substantial cost of this tariff burden long-term, Harley-Davidson will be implementing a plan to shift production of motorcycles for EU destinations from the U.S. to its international facilities to avoid the tariff burden.

Both these decisions by Harley stem directly from Trump policies, but characteristically, Trump takes no responsibility. Instead, he seems to threaten the continued viability of Harley, tweeting without evidence: “I guarantee you everybody that ever bought a Harley Davidson voted for Trump.” And “A Harley-Davidson should never be built in another country-never! Their employees and customers are already very angry at them. If they move, watch, it will be the beginning of the end – they surrendered, they quit! The Aura will be gone and they will be taxed like never before!”

Other companies, including Daimler Benz, General Motors, and Mercury Marine, have pointed out tariffs are likely to lead to job cuts. But in Trump’s view, Harley-Davidson owes a special loyalty to Trump rather than its shareholders.

It is easy to conclude from Trump’s tweets that free trade is on life support. Shortly after Trump took office, Urban Milwaukee published a column from former Milwaukee mayor John Norquist lamenting the decline in support for free trade among prominent politicians: “Bernie Sanders did it. Hillary Clinton changed her pro-trade position during the campaign. Almost no prominent politicians make the case anymore for free trade …”

Yet there is evidence that as many Democratic politicians were flipping to opposing free trade, Democratic voters were becoming the free-trade party. The next graph shows the breakdown by party of voters with opinions on whether they expected Trump’s tariffs on steel and aluminum imports to help the US economy or hurt the US economy, based on the Marquette June poll. 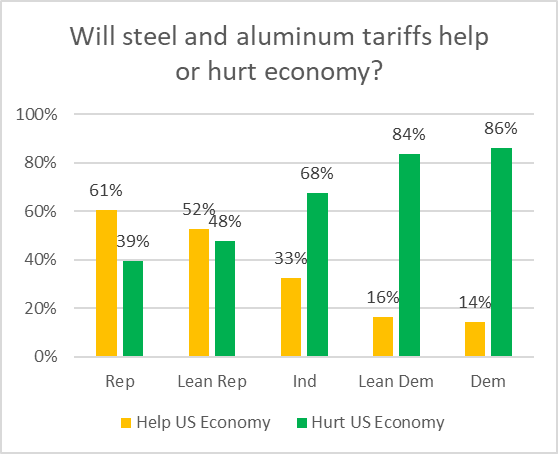 Will steel and aluminum tariffs help or hurt economy?

Perhaps partly in reaction to Trump, Norquist’s party is increasingly the party of free trade. Here is the partisan breakdown in the latest Marquette poll of responses to: “In general, do you think that free trade agreements between the US and other countries have been a good thing or a bad thing for the United States?” (As before, I include on those willing to take a position.) 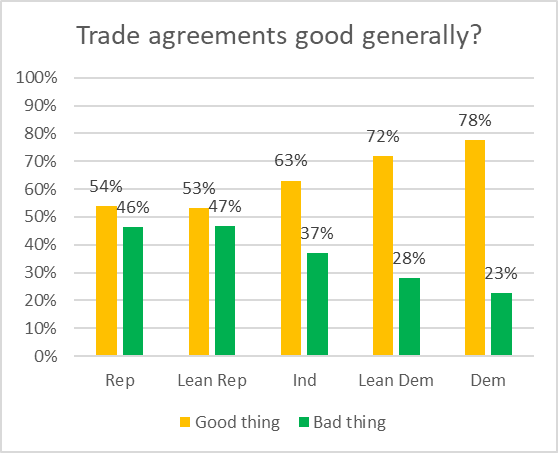 The Marquette Poll has asked this question five times—three during the 2016 election campaign and twice since. Not surprisingly perhaps, the more that Trump has attacked trade agreements, the more Democrats support them. Trump seems to have helped turn Democrats into emphatic free marketers.

More surprising is opinion among Republicans. During the campaign, as Trump won the Republican nomination, Republicans seem to have modified their beliefs to put themselves in sync with their candidate. Since then, however, Republicans have moved in a direction opposite to that suggested by their president. 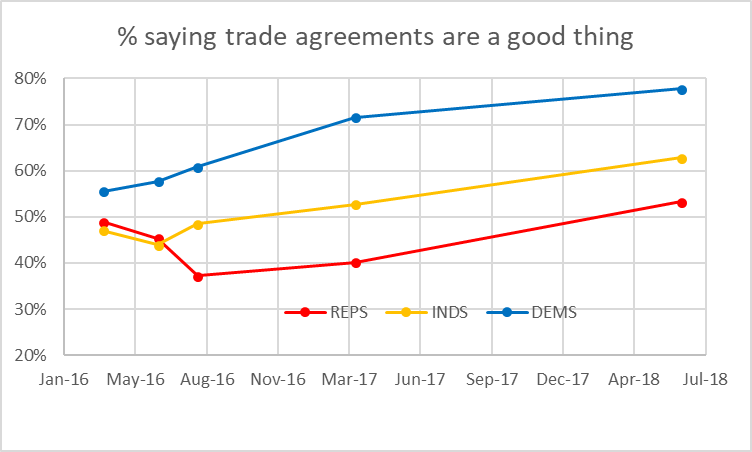 A global free economy offers many long-term advantages. In the short-run, however, it creates winners and losers. Traditionally, the United States has done a poor job of protecting the losers. The ability of Trump to appeal to people who see the economy as leaving them behind appears to go a long way to explaining his success. If in response, the Democratic Party continues to evolve as the free market party, its willingness to expand the safety net could also be good for capitalism.