Battle Over The Winter Farmers Market

By Andrea Waxman, Milwaukee Neighborhood News Service - May 24th, 2018 02:24 pm
Get a daily rundown of the top stories on Urban Milwaukee 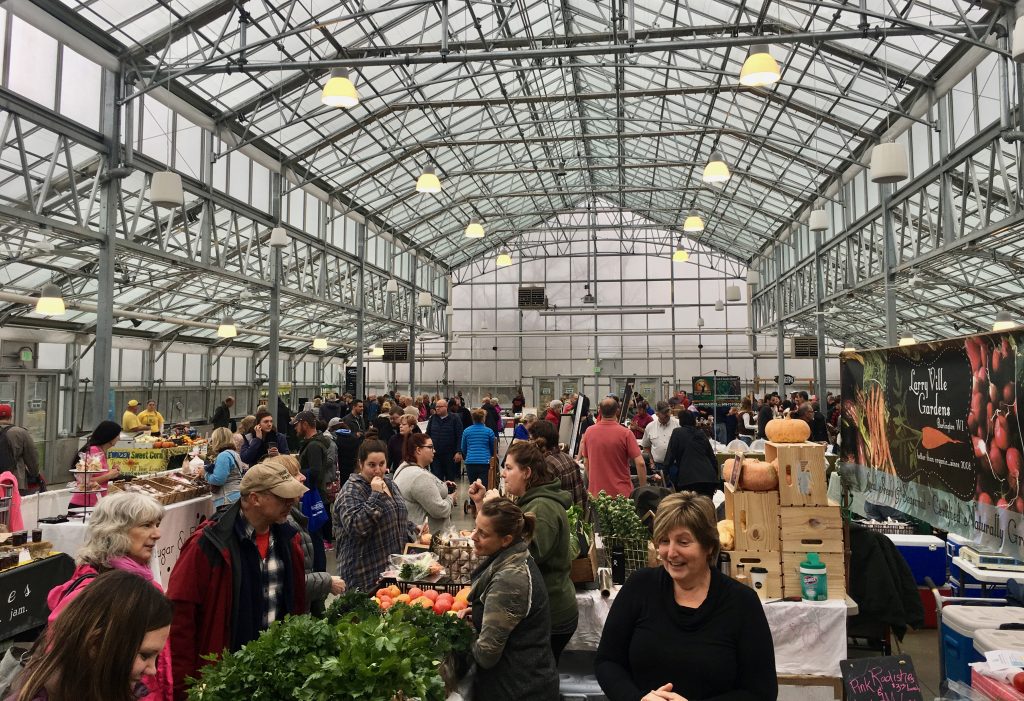 The Milwaukee Winter Farmers Market moved from the Mitchell Park Domes lobby to the greenhouse annex in January 2015. Photo by Katie Hassemer.

On a vote of 14 to 2 the Milwaukee County Board has called for the return of the Milwaukee Winter Farmers Market to the Mitchell Park Domes for the 2018-19 season. The issue had previously come before the county’s Parks, Energy and Environment Committee. The market has been run by Fondy Food Center at the Domes.

At a recent meeting of the committee, Jim Tarantino, Parks Department director of recreation and business services, attempted to explain the department’s apparently sudden decision to deny the Winter Farmers Market the lease.

Although he noted that the market has been “tremendously successful,” Tarantino said, “It’s been an incredible stress on Domes staff, (who) are already spread pretty thin … It was really just a logistics issue for us at the annex.”

The market rents the annex on Saturdays from 7 a.m. to 2 p.m. for 23 weeks from November to April. Tarantino reported that the rent of $13,800 paid by Fondy Food Center for the season does not cover the cost of staff time and other expenses each weekend, resulting in a loss of $5,300. With setup, teardown and cleanup, use of the space stretches from Friday evening into Sunday, he said, adding that the market’s shoppers crowd the parking lot and its presence precludes more lucrative wedding rentals that could bring in as much as $188,000 during those 23 weeks. 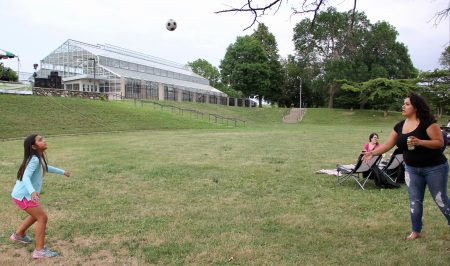 Valeria Cerda (right), a Mitchell Park resident, kicks a ball around with one of her neighbors in front of the Domes greenhouse annex. Photo by Rebecca Carballo.

However, asked how the decision to end the Domes’ relationship with the winter market was made, Parks Department interim director Guy Smith said, “It really comes down to” keeping the annex available for an exclusive catering contract that is part of an ongoing unrelated legal negotiation.

The catering company, Zilli Hospitality Group of Waukesha, sued the county because it lost money at the Coast restaurant and two event spaces in the county-owned O’Donnell Pavilion, where it had contracts. The park and garage were closed for a year following a June 2010 accident in which a concrete slab fell onto a group of people at the garage entrance, killing one and injuring two others.

Among the terms Zilli has proposed to settle the lawsuit is a 10-year lease at the Domes with two 5-year extensions. According to the proposal, the county would not have the right to refuse to extend if Zilli is in compliance with its agreements.

Tarantino said that a settlement with Zilli may require closing the Domes annex to install air conditioning. A commitment to lease to the Winter Farmers Market would complicate the negotiations with Zilli, which plans to rent out the annex for summer weddings and events.

Jennifer Casey, Fondy Food Center executive director, said she was surprised to hear the market described as a burden on the Domes staff  “because that has not been our experience. … We’ve not heard that from them. We haven’t seen evidence of five hours of staff time on Friday nights and can’t imagine what they would need to do.”

However, Casey also questioned whether the Zilli proposal is behind the Parks Department’s decision not to allow Fondy to rent the annex next season. She pointed out that the proposed settlement lists 22 winter markets among the non-catering events for which the county would earn rental income.

Casey said the market’s benefits to the community include more than $1 million for farmers and vendors each season. In addition, it provides access to high-quality fresh produce, meat, eggs, dairy products and prepared foods for all shoppers, including those on food stamps, and elderly and disabled neighbors in nearby subsidized housing.

She also asserted that Fondy Food Center is willing to work with the Parks Department so that both the winter market and Zilli can hold events in the Domes annex. She said the market can operate within the timeframe outlined in the lease and the vendors can handle the vast majority of setup, teardown and cleanup by 2 p.m. on Saturdays, as they do now.

A committee seeking a new home for the winter market has considered about 70 venues without finding any suitable site, Casey said.

Many who attended the Parks, Energy and Environment Committee meeting, including Theodore Lipscomb Sr., county board chairman, and Supervisors Marina Dimitrijevic and Sylvia Ortiz-Velez, argued that the public should not be displaced by private events.

“If you’re not going to be continuing with the farmers market and then Zilli’s has an exclusive catering contract, it seems as if the only way the public could enjoy that public asset would be through a private rental,” said Dimitrijevic. “That’s not what I envisioned when I authorized … the construction of that annex,” she said.

Ortiz-Velez, whose district includes Mitchell Park, said she understands that public events have to be weighed against potential revenue, but added, “When we’re talking about access to fresh produce in an area that is … a food desert and is being used by vulnerable people,” the residents should come first, she said.

Vendor Angela Moragne, owner of That Salsa Lady, said the reason the Domes wanted to end the lease with the market “is plain and simple: money. That’s county land. How do they have a right to it and the people don’t?”

Domes Task Force Chair William Lynch objected to Zilli’s proposed lease terms, pointing out that they lock the Domes into a 20-year agreement at a time when its future is in question.

The task force was established in 2016 after falling concrete in the Domes beginning in 2013 made it clear that the county needed a long-term plan to address the structures’ costly maintenance issues. It is charged with creating and implementing a specific plan within five years.

The committee voted unanimously in favor of an advisory resolution sponsored by Lipscomb and Dimitrijevic requesting that the county administration and parks department negotiate a new lease that will keep the winter market at the Domes annex and that will benefit the county, Fondy Food Center and Zilli Hospitality Group.

3 thoughts on “Battle Over The Winter Farmers Market”