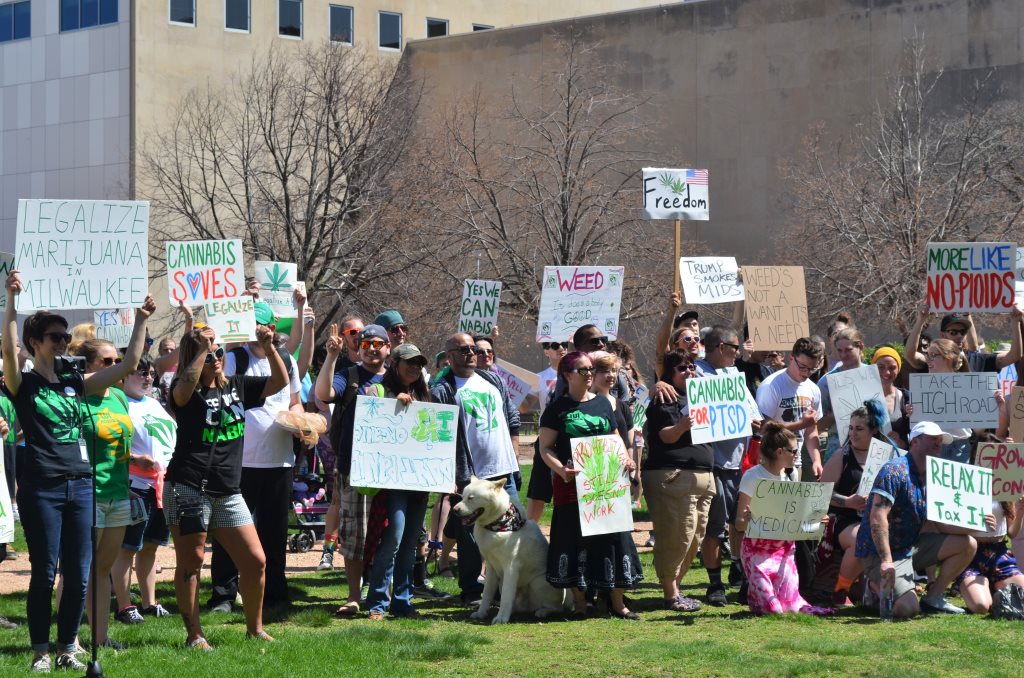 A line of protesters chanted “yes weed can” and “legalize now” as they made their way down W. Wisconsin Ave. Saturday afternoon for the 8th annual march to legalize cannabis in Wisconsin.

The March for Cannabis began at MacArthur Square near the Milwaukee County Courthouse with attendees – about 150 to 200 by our estimate – preparing their signs and listening to speakers talk about the economical, medical, environmental, racial, and criminal justice benefits that legalizing cannabis would bring to Wisconsin.

Rick Banks, an organizer for Black Leaders Organizing for Communities (BLOC), said that the organization is 100 percent in favor of marijuana legalization.

Banks said that from the very beginning prohibition on marijuana was racist and wrong. The man many credit with starting the ban, Harry Anslinger, the first federal Narcotics Commissioner, argued that cannabis caused horrible acts of violence, “satanic music” like jazz, and made black people forget their place in society.

Banks also cited research by the American Civil Liberties Union (ACLU) that said that despite similar usage rates, an African-American person is almost four times as likely to be arrested for marijuana use than a white person. “For too long, the so-called ‘War on Drugs’ has actually been a war on black and brown communities,” Banks said. “As with any war, lives have been destroyed, mothers can’t get houses, fathers can’t get jobs to support their families, and students can’t get financial aid to further expand their minds and support their future careers.”

Banks called for the release of every nonviolent drug offender as well as scrubbing their records clean. He also called for taxing marijuana to fund schools and infrastructure.

Tiffany Anderson of the Greater Milwaukee Green Party talked about all the economic benefits legalizing cannabis could bring to Wisconsin. She cited statistics by the Marijuana Policy Group that said that within a few years of legalizing marijuana in Colorado, over 18,000 full-time jobs were created and $2.4 billion was added to the state’s economy. Taxes contributed $78 million the first year after retail sales began and have only gone up from there.

Anderson also cited projections from the Wisconsin State Department of Revenue which estimated that legalizing recreational marijuana in Wisconsin would add and additional $138 million in tax revenue per year by 2021. That estimate was made on the assumption that Wisconsinites would smoke at least 55 percent of the volume of marijuana purchased in Colorado, which has about the same total population as this state.

“Our state has been so busy handing out tax cuts to the wealthy and subsidies to big business that officials have ignored this huge opportunity for jobs, growth, and revenue,” said Anderson.

David Bowen, State Representative for Wisconsin’s 10th District, began his speech with a moment of silence for Vel Phillips, former secretary of State of Wisconsin and civil rights leader who passed away last April. He said that one thing we can learn from her is to not let the odds against change stop us from fighting for it.

In February 2018, Bowen introduced a bill that would restrict employers from testing for THC. He said there are employers all over the state that continue to test for a substance that is harmless and can actually help people deal with cancer and the side effects of chemotherapy according to the American Cancer Society. He said that the policy he introduced was one of the first of its kind it in the country and that word of the proposed policy got almost a million views on social media. “People saw this as real parity and justice for people who should not be criminalized for having a medical condition and for partaking in a harmless substance any more than we do on alcohol,” he said.

“… the Governor [Scott Walker] has talked about Wisconsin being open for business, but how many of us have known folks that have had so much trouble trying to get jobs or trying to pass drug tests for partaking in what is now legal… in other states and communities?” Bowen asked. He noted that the majority of the crowd raised their hand.

He also gave a shout out to the young people protesting for gun reform. He also called for people to engage with elected officials and make sure that they are on the right side.

Six governor candidates then spoke about their support for legalization of marijuana.

Candidate Phil Anderson is a part of the Libertarian party which he said has favored legalized marijuana since its inception in 1971. He said he wasn’t in favor of taxing marijuana as it can be a way to manipulate those who consume it. He wants to make marijuana “as free as growing your own tomatoes and eating them.”

He said that money would come from legalizing marijuana and reforming the criminal justice system, including ending mandatory minimum sentencing and pardoning everyone who was in jail for nonviolent drug offenses. The economy would thrive because of less money spent on incarceration, police, social services, and public education and because of reuniting families and putting people back to work.

Mike Crute, Democratic candidate for governor and host for Devil’s Advocate Radio, said “I smell the medicine in the air today and it smells like freedom.” He said that he’s been advocating for legalizing cannabis for seven years on his show. Dr. Sanjay Gupta, practicing neurosurgeon and CNN’s chief medical correspondent, does features on the show and in a letter to Attorney General of the United States Jeff Sessions he cited a study by Rand Corp who found that states with legalized medical marijuana and functioning dispensaries had a 20 percent decline in opioid deaths between 1999 and 2010. Other studies estimated a 25 percent reduction.

“It is my heartfelt belief that the good people do smoke marijuana and until we start setting the example as business leaders and as politicians, until we acknowledge that responsible adults use marijuana recreationally and for their medicine, I don’t know how we can move this conversation forward,” Crute said.

A 2017 report by the Center for Disease Control and Prevention found that drug overdose deaths in the United States have more than tripled from 1999 to 2015. Survey data indicates that tens of millions of Americans misuse prescription opioids, sedatives, tranquilizers, and stimulants. The misuse of prescription drugs is related to high levels of prescribing such medications, with prescribers in 2016 writing 66.5 opioid and 25.2 sedative prescriptions for every 100 Americans. However opioid prescriptions have been annually decreasing by 4.9 percent from 2012 through 2016.

Democratic Candidate Matt Flynn said that legalizing marijuana was “a signature part of my campaign.” If elected he would pardon everybody in the jail and prison system in Wisconsin for nonviolent drug possession.

The issue that brought Flynn to cannabis legalization was criminal justice. He told a story of having someone in Eau Claire come up to him and ask for help getting his father a job. The father had been imprisoned for 20 years because of four marijuana felonies, “20 years for something that was innocent,” Flynn said. “There will be no mass incarceration under governor Matt Flynn.”

Democratic Candidate Mike McCabe has advocated for marijuana legalization since before he became a candidate for governor. He said that legalization was not just about personal freedom, but about reversing counterproductive and racially discriminatory drug laws. He said that we are dealing with a “tragic reality” where the state spends more on prisons than it does on the UW System. “We are literally spending more on locking people away than we are to unlock human potential,” he said.

McCabe said that legalizing marijuana was also an issue about pain management. People have told him that they wanted to be law-abiding citizens but they have chronic pain to manage and desperately want access to medical marijuana. Instead they are stuck with bags of opioid prescriptions.

Finally, Democratic Candidate Andy Gronik said that he talked to a lot of people in the crowd who suffer from problems such as drug addiction that could be handled by medical marijuana. “Every single one of you should have the right to be able to deal with that medically.”

Milwaukee County residents will be able to speak in support of a proposed referendum on cannabis legalization for the November ballot at a committee meeting at the Court House room 201B on May 11 at 9 a.m.

Check out photos from the march below: 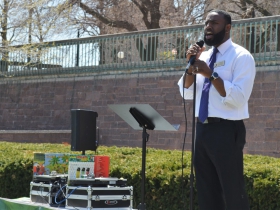 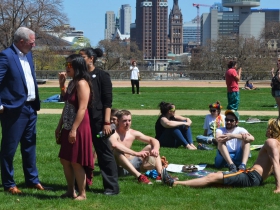 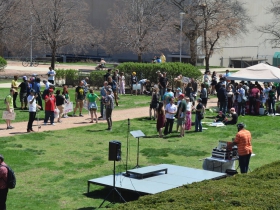 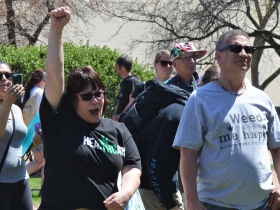 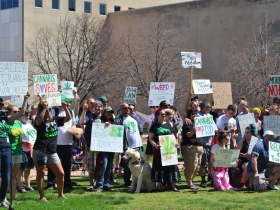 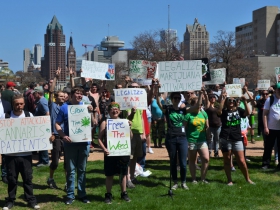