Next week The Hop hits the streets of Milwaukee, today we take you inside the Operations and Maintenance Facility. 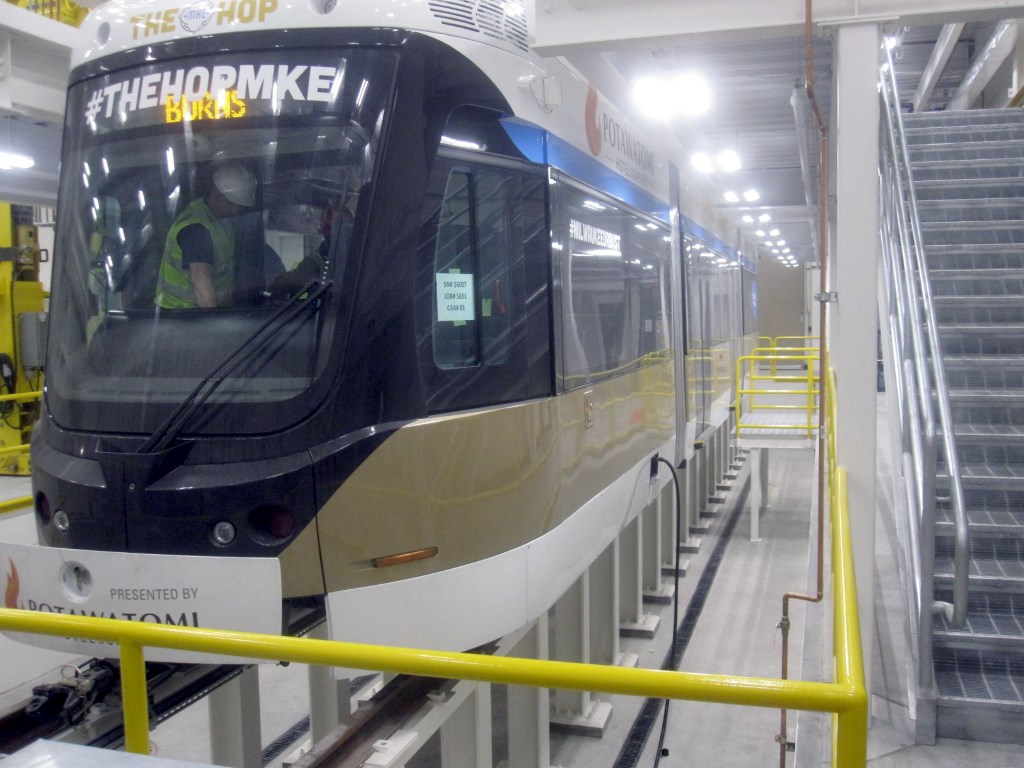 The Hop. Photo by Michael Horne.

Starting next week, The Hop, the city’s long-anticipated and much-debated streetcar, will be seen on the streets of Milwaukee, as it begins testing for public service that is expected in September.

It will be the first time a streetcar has operated in the city in 60 years. The vehicles will travel in a fenced-off stretch of track on the north side of W. St. Paul Ave. between N. Plankinton Ave. and N. 4th St.

The media was invited to take a look Friday at the MKE Hop Presented by Potawatomi Hotel & Casino in its new home, the likewise ponderously named Streetcar Operations and Maintenance Facility at 450 N. 5th St.

The facility, which is also known as “OMF,” is a two-story structure located beneath the East-West Freeway (I-794). It represents the only use of such space in the city, and is novel in that no rain or snow shall ever fall on its roof. The structure is largely cinderblock, painted an inoffensive brown. Behind the block facade, which occupies most of the northern half of the structure, is where the city’s first five vehicles will be parked and serviced. The southern portion of the structure, facing Stone Creek Coffee across the alley, is sheathed with metal cladding. On the first floor, the southern facade is punctured by windows that will allow natural light into the offices they front. The second floor is set back from the first, and consists of translucent glass panels that are very much reminiscent of those found in classic factory buildings of the city’s past.

Upon entering from N. 5th St., the visitor (and worker) is greeted by nine blue lockers, a testament to the no-nonsense nature of the structure’s use. Somebody has already claimed locker #9 by securing it with a padlock. Across the hall, facing south, is a break room with white round tables and black chairs and appliances. A couple of blue tiles spice up the otherwise white floor. Next door, down a blue hallway is a carpeted conference room painted a cream color. It holds a square table and eight chairs, with a four-paned window, offering yet another fine view of Stone Creek Coffee. Further east is a shared office space, followed by the office of Darryll Simpson, the General Manager of the streetcar system. Finally, there is a control room that awaits such things as the monitors that will provide system operations detail. Altogether well constructed and efficient, but still merely office space nonetheless.

Once the party had assembled in the break room, and at the promised moment of 2 o’clock p.m., Simpson led the reporters and television news personnel on a tour of the good stuff — the maintenance shop.

The first thing to be encountered here is Car #01 of the City of Milwaukee’s new fleet. It still boasted the signs and hashtags [“Follow Me To Milwaukee”, “#MilwaukeeOrBust”, “#TheHopMKE”] that it bore as it was transferred 600 miles by flatbed truck from Brookville Equipment Corp., its Pennsylvania manufacturer.

Still affixed to windows on the cab were paper signs identifying the vehicle as SN#16007; JOB#5851; CAR#01, just in case there might be any confusion as to its identity, the signage notwithstanding. It would be embarrassing to have sent us a Hop with the wrong serial number, or from the wrong job, or a rival casino.

Car #01 weighs 41-1/2 tons, is 67 feet long and about 8-1/2 feet wide. The car is reticulated into three sections, the end ones of which have cabs for the operators. The ends of the vehicle have destination signs composed of flashing lights. Car #01 is bound for Burns Commons, but it won’t be until June that it sees that destination in a test run. It is painted a yellow-gold color at the bottom, with a little blue stripe atop, and then white above that. The sponsoring casino’s logo is prominent on the side tops of the car. The logo is also prominently affixed to the front of the vehicle and would be the first thing to hit you if you decided to confront the train while in motion.

For now, Car #01 is parked in the service pit, designed much like one you’d find at a place that changes the oil in your car, but much cleaner and on steroids. Tracks run right atop the pit, allowing workers to safely and practicably do work on the either side of the car, which is where most of the moving parts and service needs are located. The pit is surrounded by a yellow safety railing. Above, and surrounding the vehicle, is a mezzanine, also enclosed by a yellow railing. This floor allows access to the top of the vehicle, which offers a great contrast to the general sleekness of the train.

The top is generally open to the elements, and includes the Pantograph, which is a retractable gizmo that connects with the overhead wires to provide the motive power for the streetcar’s regular operation. At the time, it was in its resting position. (The streetcar can get into and out of its barn using auxiliary power; no overhead wires are to be seen beneath the freeway.) The top of the train car also contains the HVAC systems for the train, housed in a series of boxes. You could probably lay some advertising signs flat atop the cars that could be seen by the many office workers employed in high rises along the route. (Every dollar counts, even for a system with a $10 million, 12-year sponsorship deal with Potawatomi Hotel & Casino.) Also on the mezzanine floor is a large and mostly empty utility room that houses a large green Champion air compressor which delivers its product through still-shiny copper piping that leads to the pit below. The room glows with light that enters from the translucent glass panels, and could also serve as a nice ballroom or event space if it were located somewhere else.

Back down on the first floor is a large bay to the south of the pit, with a ceiling that extends the full height of the structure. This bay too has tracks, but they are set into the concrete floor. A 7-1/2 ton crane runs on tracks above, but that tool is not ample enough to lift the entire streetcar. That feat can be accomplished by a battery of four wheeled screw jacks, also painted yellow, that stand like giant columns in the room they dominate. Finally, at the north end of the plant, is a narrow bay that is walled-in on all four sides. This is the car wash. This is not a particularly automated facility, and appears to consist largely of a hose, a power washer, and a means to spray soap on the dirty vehicles. It appears to be somewhat incomplete, which is fine, since it won’t be needed for some time. 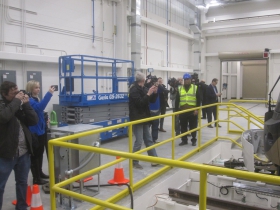 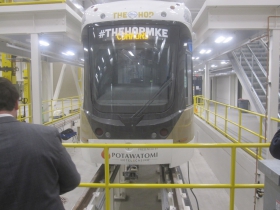 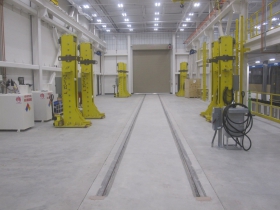 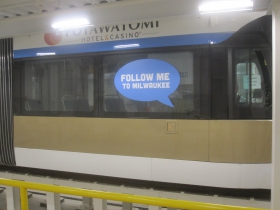 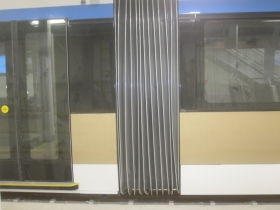 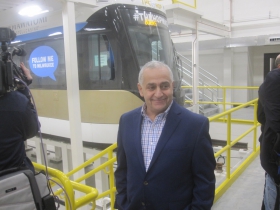 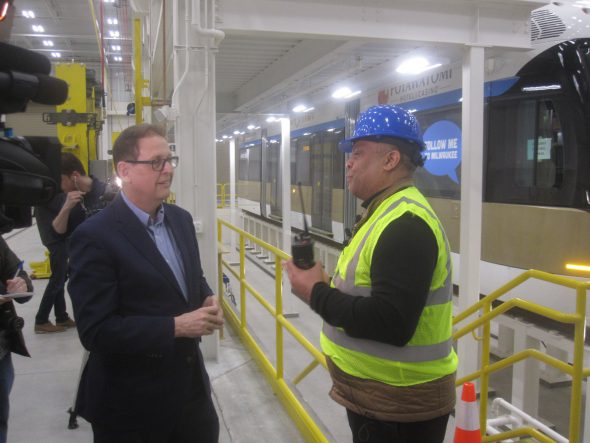 The tour was hosted by Darryll Simpson, the General Manager of the MKE Hop. Simpson, dressed in a yellow City of Milwaukee safety vest and blue Milwaukee Water Works hardhat, has a pleasant demeanor and a fine speaking voice the accent of which perhaps shows the influence of Charlotte, where he is based, certainly more so than New York, where he was born.

Simpson certainly knows the ins and outs of the train business, beginning with the New York Metro North route where he began his career 30 years ago, apparently when children were conductors on commuter lines, judging from his youthful appearance.

Although he was dressed in Milwaukee regalia, Simpson is one of the 83,000 employees of Transdev, the Paris-based firm that has the $3.5 million annual contract to operate the system. Simpson is a certified Project Manager Professional, and is also a World Safety Organization Certified Safety Executive, and uses the PMP, WSO-CSE designation in his official title. He is based in Charlotte, but is planning a move to Milwaukee. He hasn’t found a home yet, but says he is looking at Downtown. “I hear the driving is easy in Milwaukee, but I want to live close to work.”

2 thoughts on “Plenty of Horne: Streetcar Barn is Hopping”