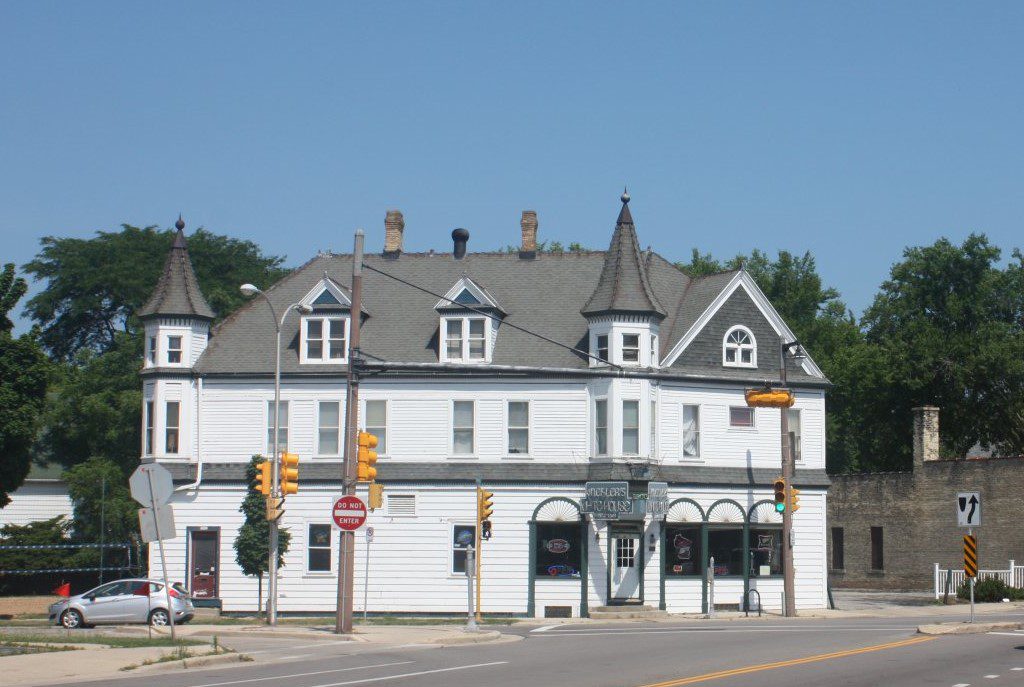 The White House tavern building at 2900 S. Kinnickinnic Ave. in Milwaukee’s Bay View neighborhood has been temporarily designated historic by the city’s Historic Preservation Commission. The designation, which lasts for 180 days and precedes a permanent designation, comes after a false start in the designation process, with area Alderman Tony Zielinski first submitting and the withdrawing a nomination in late February.

Instead it was Bay View resident John Ebersol who submitted a new nomination on March 13th for the Queen Anne-style building to get historic designation. Ebersol told the commission that the building has long been important to him and his family, going back to before he was of legal drinking age. “The tally results for the elections were always chalked on a board there,” said Ebersol.

The historic tavern is believed to have drawn its name from a 1941 newspaper article in the Bay View Observer that referred to the building as “The Capitol” of the neighborhood. Before that it was known as Kneisler’s after its original operator, William Kneisler. Kneisler had previously operated Schlitz’s Union Park operation to the north at the site of today’s Outpost Natural Foods (2826 S. Kinnickinnic Ave.). He leveraged that partnership into support from Schlitz in opening the bar around 1891 on his family’s land, which was passed down by his descendants until 2005 when it was sold to Sean Raffaelli and Donald Raffaelli.

The White House tavern closed at the end of 2017, as the building was sold to HCI Properties for $400,000. David Griffith, who leads the Franklin-based operator of apartment buildings, was on hand Monday afternoon to object to the nomination.

“We kind of wonder what the quick move to the designation is since there has been significant work to the outside of the building in recent years,” said Griffith. His suggestion was the building wasn’t historic anymore since the Raffaelli’s had installed aluminum siding and made other exterior changes.

But commission chair Ald. Robert Bauman shot down that idea. “Clearly, it qualifies for designation,” he said, and “a lot of people probably thought it was designated” because it seems such an obvious candidate.

That said, Bauman noted this was a temporary designation, characterizing it as a “temporary restraining order” on changes to the property.

After acquiring the property, HCI began circulating a rendering of a partially redeveloped building as a means of attracting a restaurant operator for the first floor. That’s when Zielinski stepped in.

“I was concerned and heard a lot of rumors that they were looking at tearing it down or something like that,” said the alderman in an interview with Urban Milwaukee. And so Zielinski got any work being done by HCI Properties shut down. On February 27th, the Department of Neighborhood Services issued a violation report captioned, “Work Being Done Without Permit.” As an added hammer, Zielinski also wanted to nominate the building for historic designation.

But he ultimately withdrew his nomination following a meeting with Griffith and his partner. “They were going to preserve the historic nature of the building, without having to jump through all the hoops,” said the long-time Bay View alderman. “This is one of the most historic buildings we have… It’s a combination in Bay View of preserving what’s historically special and moving forward, you need both.”

Having the historic designation makes it “somewhat challenging for us,” Griffith said. He also told the commission “we are not interested in having a bar in that property.” The company intends to find a restaurant operator to lease the space, which at the very least may involve interior changes, but the city’s historic preservation ordinance only applies to the exterior of structures.

City historic preservation staff member Carlen Hatala presented a report to the commission on the property’s history. “The common knowledge is that the building was built in 1891, but documents do not bear that out,” said Hatala. That contradicts the neon sign outside the bar and the story that’s long been part of the Kneisler family history.

Still, Hatala says the building is well qualified for historic designation. It has a long history of serving as a community gathering place in Bay View and the Kneisler family has a lengthy history of political activity in the city. Hatala said the tavern long served as “the informal headquarters of Bay View.”

The commission unanimously approved the nomination. They now have 180 days to hold a hearing on the permanent designation of the building.